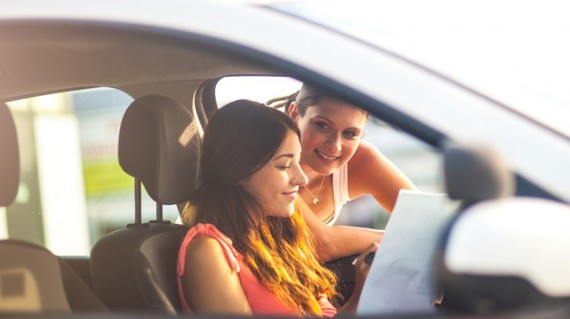 Many parents of newly licensed teenagers worry about their children's safety, and with good reason. According to the most recent study by the Centers for Disease Control and Prevention, teen drivers are almost three times more likely to get into a fatal crash than drivers ages 20 and older.

Parents can't ride shotgun forever to keep their kids from speeding or texting while behind the wheel. What they can do, though, is use technology to monitor young drivers.

The latest devices and apps "essentially extend the time the parent is in the passenger seat," says Russ Rader, a spokesman for the Insurance Institute for Highway Safety. "The parent can still be there, virtually."

Telematics features, which employ wireless devices and "black box" technologies to transmit data in real time, and GPS monitoring can provide a stream of information about your teen driver's whereabouts and on-road performance. Some of this technology is free, and some might even result in discounts on the sky-high cost of insuring young drivers.

Here are some examples of available technology:

Ford's MyKey: This feature, available on most Ford vehicles since the 2009 model year, lets parents program a second key that communicates specific restrictions to the vehicle. Parents can limit audio volume, prevent the radio from turning on until the driver has buckled up, screen and block satellite stations, and adjust the "low fuel" warning to appear earlier and lessen the chance that the car will run out of gas.

USAA's License+: Several major insurers offer telematics devices, which plug into a vehicle's onboard diagnostics port and record driving performance. Some, like USAA's License+, are designed specifically for monitoring novice drivers. Others are designed for usage-based insurance plans but could also be used to track a teen's driving habits, such as hard braking, speeds of more than 80 mph, and the time of day a vehicle is being used.

State Farm's Drive Safe & Save: State Farm's Drive Safe & Save program allows parents to view car data such as braking, acceleration and the speed at which a vehicle turns. The program can be accessed through a paid OnStar or Ford SYNC subscription, or through a telematics device called InDrive, which plugs into the vehicle's onboard diagnostics port.

"It's not that you want to spy on your kid. But you want to make sure they make the safe choices," says Richard Muñoz, who owns a State Farm agency in Austin, Texas.

Allstate's Drivewise and Star Driver: Drivewise is a plug-in device that allows parents to see reports of a young driver's mileage, speed, braking and hours driven.

Drivewise is also available as a free app for Android and iOS; it currently works in 21 states. Another free mobile app from Allstate is Star Driver, which helps teach teens good driving behaviors. Teens and parents come up with parameters before the teens drive, such as how long they'll be gone and how fast they will go. If a teen goes outside of those parameters, Star Driver will send parents a text alert. The app also rewards good driving behaviors with points and badges.

Hyundai's BlueLink: Most new Hyundai vehicles are equipped with BlueLink, an embedded telematics system with multiple options, many of them having to do with safety and remote functions like unlocking or starting the car. Among the parent-friendly options are setting a speed limit, determining what hours a car can be driven, and establishing a "geofence," or boundary, to restrict where a teen can and cannot drive. Most features can be set in the car itself; smartphone apps for Android and iOS let parents monitor the teen's driving. After a three-month free trial, BlueLink costs $99 per year.

GM's Family Link: Family Link from General Motors works through the OnStar telematics system. It lets parents find their teen's vehicle on a map in real time and set up text alerts for when the young driver arrives at a destination. Family Link costs $3.99 per month in addition to the monthly OnStar subscription fee.

Motosafety: Motosafety is a GPS-based monitoring system that plugs into a vehicle's on-board diagnostics port.

Among Motosafety's options are geofencing, real-time tracking, a driving history (including where the car stops and for how long), a curfew alert if the car is used after parent-set hours, and a daily report on habits like speeding, harsh braking and rapid starts. Motosafety costs $79.95 to buy plus a $19.99 monthly service fee (no contract is necessary).

MobiCoPilot: Another GPS-based plug-in device is MobiCoPilot. It reports driving habits like hard braking, excessive acceleration, engine revving and speeding. Parents can track the vehicle, receive alerts when drivers arrive or depart from "landmarks" (e.g., school or workplace), view driving history, and set hours during which the car cannot be driven. The cost is $149.95 for the device plus $19.95 per month. All-inclusive 12- and 24-month plans are available for $299.95 and $499.95, respectively.

Parents who want to reduce the risk of phone-related crashes can install apps to block texts and calls while their teens are driving beyond a certain speed (generally from 10 to 25 mph). These apps are often free.

Sprint's DriveFirst, AT&T's DriveMode: Some cellular service providers have created proprietary apps that are free to their customers. Functions vary depending on the plan and the phone. For example, Sprint's DriveFirst mutes text alerts and sends calls to voice mail, then auto-replies via text that the phone's owner is driving and cannot respond. AT&T's DriveMode will also auto-reply. However, if it's installed in an iPhone it will not respond to iMessages.

And teens who think they can bypass these apps should think again: DriveMode will text parents to say that it's been disabled, and DriveFirst lets parents check in online to see when the app is running.

Canary, MamaBear: Other smartphone apps offer varying degrees of driver monitoring.
A free app called Canary lets parents know whether a teen speeds, drives after curfew, travels beyond parent-set boundaries, or disables the program, among other features. It works with both Android and iOS, but can provide only limited information on iOS.

MamaBear notifies parents of a teen's departure and arrival time and whether the car is driven faster than a certain speed. The basic version of the app is free; the ad-free versions cost $14.99 for three months and $24.99 for six months, and offers additional services, such as where the car was driven each day during the previous week (some services work only on Android devices).

Using what you learn

Signing up for telematics programs with your car insurance company might make you eligible for discounts of 5% or more. Some insurance companies will combine this with other price breaks, such as for taking a driving course or maintaining good grades.

Monitoring driving habits isn't about punishing teens for wrongdoing, says insurance agent Ryan Andrew of The Andrew Agency in Richmond, Virginia. Parents can use what they learn to talk with their teen about how to become a better driver.

Donna Freedman is a contributing writer at NerdWallet, a personal finance website.