We've been hit by the digital plague. Abandoning higher education's traditional mantra is scary. We were nurtured by the very industrialized curriculum that has shown itself to be sweepingly inefficient. "Education may be the only thing people still believe in in the United States. To question education is really dangerous. It is the absolute taboo. It's like telling the world there's no Santa Claus," says renowned entrepreneur Peter Thiel. Likewise, it is hard to pull the plug on our old bloat filled friend, the traditional college education, even when we read Goldman Sachs' December 2015 Emerging Theme Radar stating, "graduates from the bottom 25% of colleges earn less, on average, than high school graduates."

But I've lived through this all before. I worked at Atlantic Records in 2000 when Napster -- with the help of Shawn Fanning and Sean Parker -- destroyed the music industry business model and took away our holiday spirit. The sentiment shift that started with music quickly bled into motion pictures, magazines, books, and the list goes on. Robert Tercek, writing in his 2015 book Vaporized, says, "Any part of a business or product that can be replaced by pure digital information almost certainly will be." Tercek says, "That's why we are seeing so many companies' crater and collapse completely, undone by nimbler rivals who use digital media to undermine their old-school counterparts."

Specifically, the way content has been monetized up to this point is by selling the container. The CD, DVD, book, and college experience, are nothing more than nice looking containers holding information that is easily digitized. And fewer and fewer people want to pay $200 for a Led Zeppelin boxed set, let alone $100,000 for a college education.

For 561 years, since Gutenberg's press was created in 1455, the container method has prevailed. But containers possess bloat. And bloat is expensive in all marketplaces--especially markets that are looking for cost effectiveness and global consumer growth; both of which fall into higher education's purview.

All this talk about digital imperatives and container bloat makes me feel like getting in an innertube and finding a 645 foot lazy river or, perhaps, a 25-person hot tub to kick back and relax in. Luckily, Texas Tech University in Lubbock, Texas, has both as they just spent $8.4 million, like many other higher education institutions, adding these quality amenities to their container. In the name of education.

Courtney Rubin, writing for The New York Times, found that dozens of schools are building water attractions with the hopes of attracting prospective students and over 92 schools are reporting over $1.7 billion in capital projects. This version of higher education leadership doesn't exactly meet the "we are raising tuition because of less state support" pathos driven plea. It might be more akin to Polaroid deciding to launch a new 1980s styled instant camera--in 2016--but with gold plating and a price tag 100 times the original price. This shallow educational admissions tactic also raises flags in a similar vein as the 2006-2007 financial loan excess predated the rollercoaster fall of housing value.

It's not just financial bloat and mismanagement that are leading the standard model of higher education astray. Students are required to take hosts of irrelevant courses for their major field of study in the name of general education. Yes, Gen Ed breeds a broader view of the world perhaps in the same way that listening to all the songs on a Led Zeppelin album breeds a deeper understanding of the band--but it isn't essential for you to sing along with "Black Dog." There is absolutely no way this excess, across the broad higher education spectrum, will continue into the future, especially in the $1,000 a credit-hour variety.

A 34-year-old undergraduate student recently came into my office. He has been going to college on and off for sixteen years. He has two classes left to take to graduate with his Bachelor's of Arts degree. In addition to a ridiculous transcript that shows him withdrawing from more courses than passing, he is accompanied by another trail: six figures of student debt from his educational enrollment at a long list of colleges and universities. He currently works in the food service industry at a college dining hall making sandwiches and fries. In one of my low ethical grading assessment moments, he passed his senior capstone with me with a grade of a D-, not necessarily because he earned that grade but because at this point I don't want to hurt him any further. Higher education has not done him any favors.

The educational foot soldiers are not the only ones seeing the effects of educational bloat on the frontlines both with student indebtedness as well as prospective student (and families) well-reasoned skepticism. Goldman Sachs finds, "The average return on going to college is falling. For the typical student the number of years to break even on the cost of college has grown from 8 years in 2010 to 9 years today." Specifically, the document finds that college graduates in the year 2030 will not break even on their college investment until they are 33 and 2050 college graduates won't come flush on their investment until the age of 37. 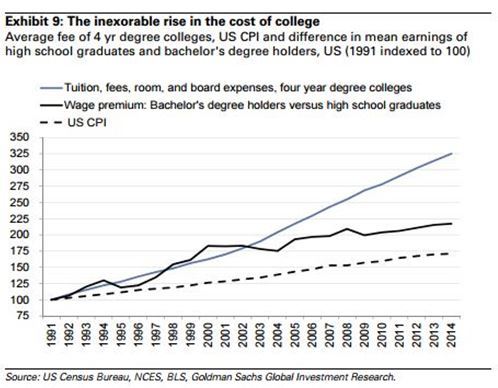 Unlike the scenario that Goldman Sachs paints, we all know that college debt ratio and student enrollment ratio will not continue in a similar trajectory as it has over the last decade. It is impossible. The President of the United States, Congress, state governments, college families and general economic infrastructure are all clear that this is not an option. But, as the Titanic fills with water, all of a sudden you have a stronger distinction between first class, second class and third class passengers.

"The choice of college and major are more important than ever to students given the changing return profile," says Goldman Sachs. Their surveys show median wages of recent college graduates in architecture and engineering are 51% higher while wages of those majoring in the Arts are 15% lower than the median across majors.

So the answer is clear: we need to only mint architects-- and we need to steer clear of those damn artists. If you listen closely, you can hear Sir Ken Robinson and his iconic TED talks crying in the background.

We don't just have to hypothesize as to what the future of higher education will look like. Hosts of companies are expanding our cognitive realization of what online platforms can do. Coursera (Mountain View, CA), edX (Cambridge, MA), and Udacity (Mountain View, CA) are all blazing for-profit trails while simultaneously posting staggering growth in the educational space. In addition, video-based self-study courses from providers such as Udemy (San Francisco, CA), SkillSoft (Nashua, NH), Lynda (Carpinteria, CA), Grovo (New York, NY), and BigThink (New York, NY) have been bringing the ability of learning to anyone who has a hankering for new knowledge. Finally, professional education and certificates from platforms such as SkillShare (New York, NY), Pluralsight (Farmington, NM), and General Assembly (New York, NY) are taking the competency-based model and showcasing it in the professional world--and growing support for the process. All of the prior are scaling with venture capital backing, international prowess, and corporate savviness. Change, it is a-coming and it's coming down the broadband pipeline.

Within the last month, I have had three students transfer credits toward their undergraduate degree from Straighterline.com. Straighterline provides students with a three-credit course for $49 after tests and a final exam. All the tests are proctored via web video. Brett Baldwin, a senior at Green Mountain College, tells me, "Straighterline took control of my desktop for the test and I had to show the test proctor all around the room with my laptop video capture and they watched me answer the exam on the video feed as well." In a few short weeks, while doing his due diligence with course reading and studying, he completed several credits of undergraduate coursework. On the cheap.

Burck Smith, CEO of Straighterline, says, "93% of colleges charge the same or more for their online courses as their face-to-face instruction, when in fact if should be a lot less." Smith tells me the birth of Straighterline was to focus on the general curriculum and says, "We decided to focus on the Gen Ed courses, which are the bulk of online courses, offer them much closer to the costs of delivery as opposed to trying to use them to subsidize face-to-face infrastructure, and create transfer agreements with willing colleges. Typically colleges are eager to bring in transfer students and, then, we started to create much lower priced pathways into degrees."

Cost Savings is Not Rocket Science

Digitizing the general education segment of the university experience and creating a general educational hybrid model can quickly implement a tuition cost savings across a large segment of colleges and universities--with little loss to major specialization and rigor. This hybrid Gen Ed move, perhaps shown best by outside the ivory tower entities like Straighterline, will also not diminish the external attributes we know and love about higher education like interest clubs, sports, theater and partying at the local frat house on Saturday night.

The hybrid model, like the Toyota Prius Hybrid, has more moving parts and potentially more maintenance. Its virtue is that the hybrid nature does not disrupt the standardized model but instead works in conjunction. You have a digital economy engine operating with a traditional 87 octane, brick and mortar power source. Regardless of some complexities, this move is a solid interim choice between where our educational system is currently and where the bulk higher education system will be in 2025.

If higher education administration can't evolve the content model of their institutions in a fairly quick manner, I have some directions: Partake in a conversation with tax accountants discussing TurboTax, bank tellers on ATMs, cashiers toward self-checkout lines, small scale lawyers on LegalZoom, stockbrokers with ETrade, as well as travel agents and their friends at Priceline. The majority of traditional higher education can't afford an old-school business model. Replacing general education with hybrid curriculum is a great floatation vest. If we don't change on our own accord, someone will be happy to show us the way. But, under that set of variables, they will also end up showing us the exit.

Writer and Associate Professor of Communication & Media at Clarkson University