I experienced my first major depression in 1994, two years after I tested HIV positive. I think it took so long to manifest because I was too busy being in shock and then denial for much of those two years. Getting past those feelings freed my mind to feel the weight of my fate.

I was also deeply closeted back then about being gay, mostly with my family. The combination of keeping both secrets from them, in addition to the worry I had over dying before the age of 30, obviously wore me down. Then my ex-boyfriend, the person I believe gave me the virus, died. He was 30. His passing away only pushed me deeper into despair. 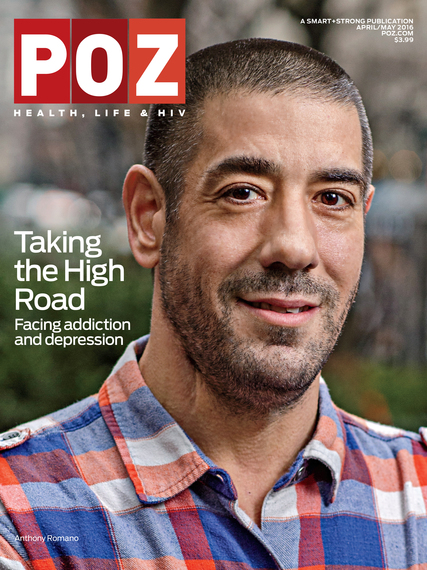 I recovered slowly, with the help of medication and talk therapy. I had become more comfortable in my own skin. Nonetheless, in 1996, I had my second major depression. While I had succeeded in the short term with trying to cope, I hadn't addressed the root cause of my suffering--I was still in the closet and screaming to get out. So I got out, and it worked. I got much better.

My story isn't unique. In fact, depression is often a silent partner to HIV. For most of us living with the virus, depression shows up after we test positive. However, for many of us, depression came along before the virus. I know it to be true for me. I attribute, in part, my becoming HIV positive to having some level of depression, which tends to affect behavior and choices.

Both feature stories in this issue address depression. The first feature explores the intersection between depression and addiction, particularly to crystal meth. Our cover guy, Anthony Romano, shares his experience recovering from meth, as do Michael Crumpler, Daniel Pintauro and many others. Click here to read their stories.

Mental health is clearly important for general health. The AIDS Action Committee in Massachusetts understands that very well. The Boston-based group provides extensive addiction and mental health programs, in addition to its HIV-related services. AIDS Action is led by Carl Sciortino, a former state representative and a person who lives with HIV. Click here for our Q&A with Carl.

Allan Clear, a longtime harm reduction advocate, knows all about providing essential services. After 25 years at the helm of the Harm Reduction Coalition in New York City, he has a new role as the director of drug user health for the New York State Health Department. The position is the first of its kind in the United States. Click here to read more.