Unions may have been weakened by Republican efforts to eliminate labor's collective bargaining rights (which in turn weakens their support of Democratic Party policies), but that may be changing as unions have found a new cause: working to raise minimum wages.

Los Angeles is the latest city to raise the minimum wage--to $15 an hour in five years. Los Angeles is the fourth city, and by far the largest, to enact a $15 minimum in the past year, reports The New York Times. The others are Seattle, San Francisco and Emeryville, California (near San Francisco). A $15 minimum has been proposed in New York City; Washington, D.C.; and Kansas City, Missouri.

And labor unions in the service industries are behind the push. This is exactly what unions are good at--encouraging higher wages in non-union businesses such as McDonalds, Walmart, and even Facebook to match union benefits. The vote by the Los Angeles City Council was 14-1 in favor. That raises the issue of a higher national minimum wage.

The $7.25-an-hour national minimum wage was last set in July 2009. And, according to the University of California Davis Center for Poverty Research, as of 2013:

Currently the state of Washington has the highest minimum wage rate at $9.32 per hour. Unions had been stymied by the outright banning of collective bargaining, or even by the requirement that they join a unionized shop, in many of the right-to-work states--25 at last count, all controlled by Republican legislatures. It is an "I win, you lose" bargain that Republican legislatures have made with workers in their own states. The outright suppression of workers' wages has only weakened economic growth, and indeed the reddest states with the strongest anti-union laws are also the poorest.

Several other cities, including San Francisco, Chicago, Seattle and Oakland, have already approved increases, as we said, and dozens more are considering doing the same. In 2014, a number of Republican-leaning states like Alaska and South Dakota also raised their state-level minimum wages by ballot initiative.

The 67-percent increase from the current California state minimum will be phased in over five years, first to $10.50 in July 2016, then to $12 in 2017, $13.25 in 2018 and $14.25 in 2019. Businesses with fewer than 25 employees will have an extra year to carry out the plan. Starting in 2022, annual increases will be based on the Consumer Price Index average of the last 20 years. The L.A. City Council's vote will instruct the city attorney to draft the language of the law, which will then come back to the Council for final approval. 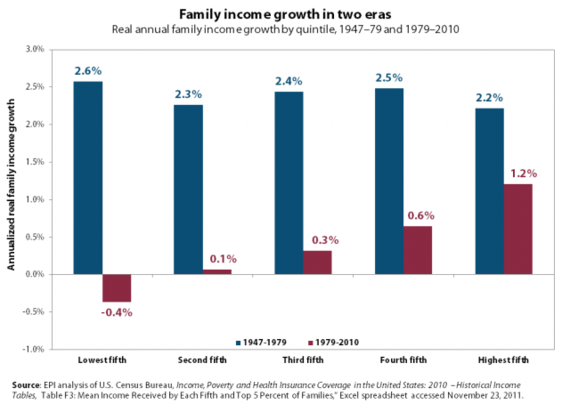 This can only strengthen collective bargaining efforts in other states. Household income for most Americans has been declining since 1979. The above income quintiles show real annual income growth from 1947 to 1979 (blue), and from 1979 to 2015 (red). It highlights the tremendous income inequality for the poorest Americans since then, partly because the national minimum wage of $7.25 an hour hasn't been raised since 2009, as we said.

From the New York Times article:

"The effects here will be the biggest by far," said Michael Reich, an economist at the University of California, Berkeley, who was commissioned by L.A. city leaders to conduct several studies on the potential effects of a minimum-wage increase. "The proposal will bring wages up in a way we haven't seen since the 1960s. There's a sense spreading that this is the new norm, especially in areas that have high costs of housing."

The groups pressing for higher minimum wages said that the Los Angeles vote could set off a wave of increases across Southern California, and that higher pay scales would improve the way of life for the region's vast low-wage work force.

The push for a $15-an-hour minimum wage is not confined to populous coastal states, said The New York Times. In Kansas City, Missouri, activists recently collected enough signatures to put forward an August ballot initiative on whether to raise the minimum wage to $15 by 2020. Kansas City's city council is deliberating this week over how to respond and could pass its own measure in advance of the initiative.

Of course, there is an additional bonus to state budgets from raising the minimum wage. It removes those at the bottom of the income ladder from state assistance programs like Medicaid, food stamps, and even welfare rolls. Why shouldn't everyone support such a grand bargain?