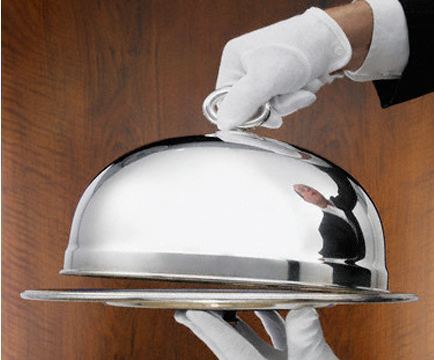 More than a decade ago, I took a job as a server at a branch of a steakhouse conglomerate in rural North Carolina, where, for $2.13 an hour plus tips (including some insightful hand-scrawled notes in lieu of dollars), I waited tables and swept up piles of broken peanuts. The steakhouse has seen some changes over the years (eventually, busted peanuts make for busted floors). The pay, it turns out, has not.

The rate of $2.13 an hour -- also known as federal subminimum wage, or the standard base pay for waitstaff in many states -- hasn't budged a penny in 20 years. Even if you work full-time, that amount obviously won't pay the bills. So how much are servers actually able to bring in these days? How do their wages stack up against those of other restaurant employees?

It's hard to pin down accurate figures for servers. For instance, no IRS-er ever tallied the coupon someone once gave me as a tip, or, more significantly, the mass of free or discounted meals I ate on the job. Cash tips, it will not surprise you, aren't always accurately reported either (though the IRS does monitor reported gratuity income and an alarm goes off if the amount is suspiciously low). But scanning figures from the U.S. Bureau of Labor Statistics, trade journals, job boards, and a number of surveys provide some insight into what the food and beverage industry takes home.

According to a 2010 report conducted by the U.S. Bureau of Labor Statistics, for instance, I would have been better off driving north to the District of Columbia, which currently ranks as the highest paying state for waitstaff. The mean wage there is said to be a $14.30 per hour, including tips. Better yet, maybe I should have tried my hand at tending bar.

Here's what other food-service employees make (salary ranges given are annual for full-time positions, hourly for jobs that are usually part-time).

Highest-Paying Restaurant Jobs (Plus the Lowest-Paying)