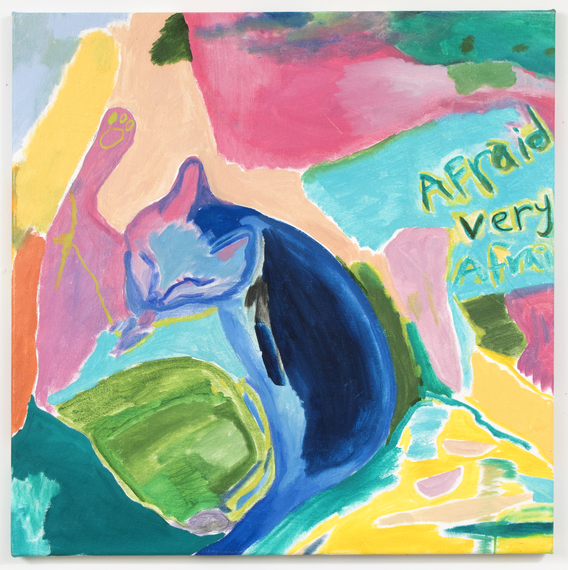 Jennifer Sullivan's painting in the booth of Five Car Garage (Los Angeles) depicts a feline grooming itself with the words "afraid very afraid" scrawled in a corner in remarkably keyed colors. In this painting, Sullivan continues on themes of which stretch between desire and the absurd, always sincere and vulnerable no matter the antics. Next to the preening cat hangs a painting that looks like a triangular protest banner made of loose canvas, completed by several eggs-over-easy sculptures affixed to it, along with the phrase BODY WORK. Sullivan will have a solo show at Five Car Garage this summer (June 18-August 15). 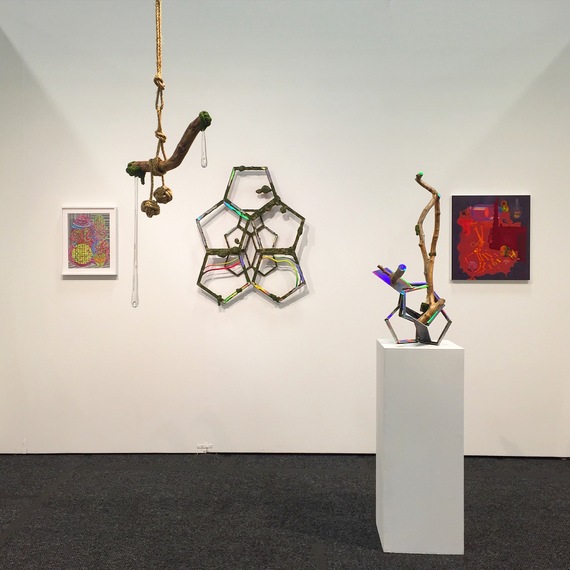 David Shaw's work shined like a beacon from in the booth of Jeff Bailey Gallery (Hudson, NY). Shaw's glimmering holographic laminate, a signature material, and soft, carved wood balanced and redoubled upon itself in cryptic knots and akimbo limbs. His works become a minute forest and statement of opulent brevity, lit with all possible light. 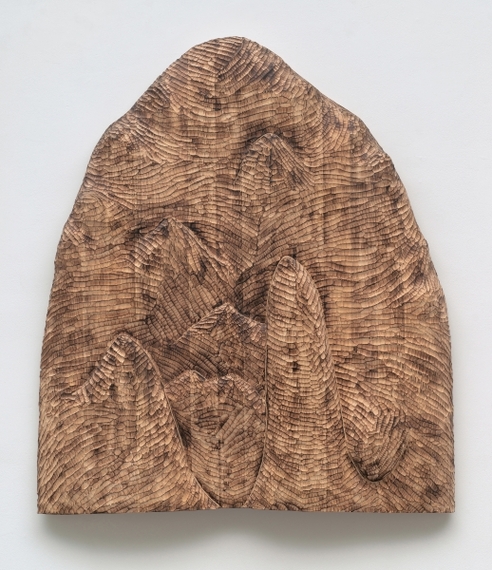 Aaron Spangler's wood carvings were mountainous and fine all at once at Zieher Smith and Horton Gallery (New York), monolithic in stature but invested with a palpable love of land. Spangler's kinship with his environment echoes strongly from his mythic North Woods Minnesota studio, and seeing his works alongside the sun dappled abstract surfaces of Clare Grill's paintings and the folksy landscape preponderances of David Byrd's works was a revelation. 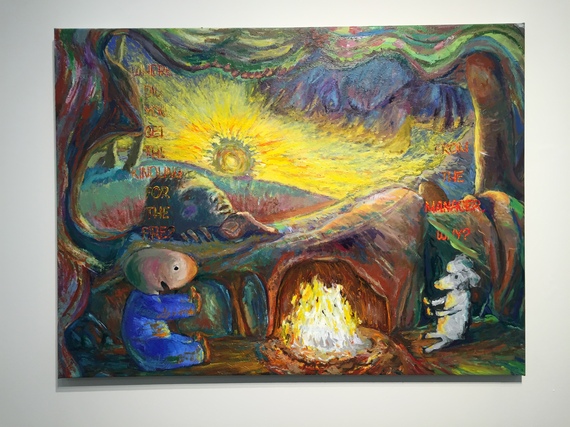 Sydney based gallery Minerva, was showing a solo presentation of remarkable paintings by Hamishi Farah, which wove together art history and ephemeral internet content, such as memes or momentarily notable YouTube videos. One painting that caught my eye was a landscape with Romantic energy, emblazoned with a fiery sun, but also inexplicably implicated with a conversation between two comic avatars: "Where do you get the kindling for the fire?...From the manager, why?" Though the exact cultural references for many of the pieces were unfamiliar to me, a sense of the almost mythic utility of utterance gone awry was notable. 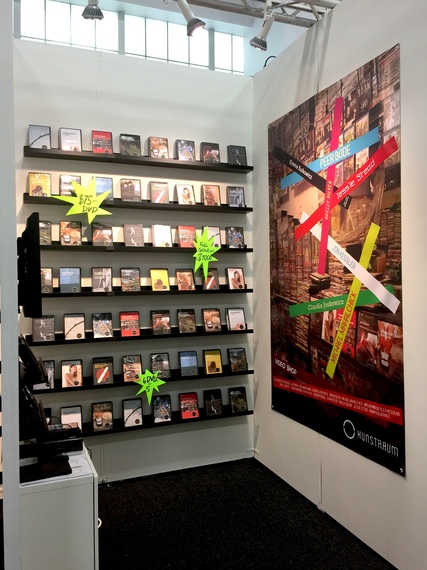 Kunstraum LLC (Brooklyn) presented an ambitiously relaxed project, VIDEO SHOP, showcasing "artist-authorized bootlegs" editions of DVDs in a video store recreation, including works by Jon Kessler, Nadja Verena Marcin, David Merrit, Emma Sulkowicz, Shelly Silver, and more. A DVD of Alex McQuilkin's "ROMEO AND JULIET (I Wanna Be Claire Danes)" stood out in a manner of iconic, throw-back glory. The process of browsing shelves of DVDs and previewing some on hand-held screens was nostalgic and warm, but also felt like a prescient way to open up a treasure trove of hidden, videographic potential. 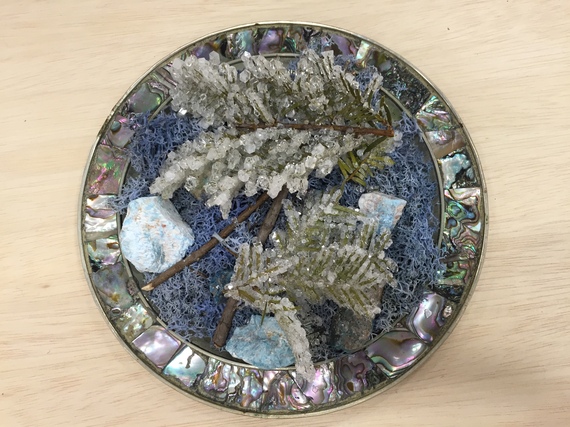 Samsøn Project (Boston) presented an impressively varied booth of more than 40 artists, which carried the feeling of a collection or archive as much as an art fair booth. Rico Gatson's paintings were well represented there, nestled in among several other gems. Ingrid LaFleur's moss, crystal, and mother of pearl infused plate is adorned with potent notions of nature, knowledge and virtues of magical experimentation. LaFleur, an expert on Afrofuturism, is also an interdisciplinary performance artist and the founder of AFROTOPIA, in Detroit -- her hybrid practice extends to installation, performance, sound, writing, and sculpture. 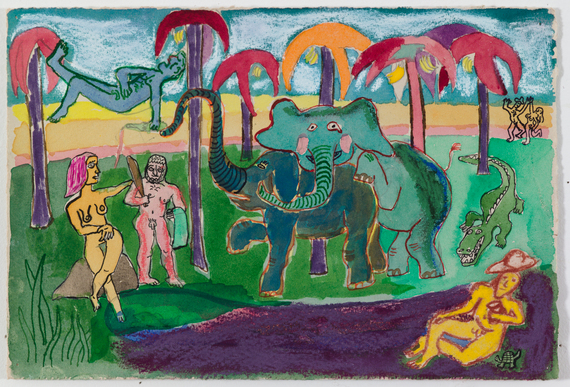 At Bernard Ceysson (Luxembourg, Paris and Geneva), Alexander Nolan's works on paper allow for poetic speculation, transporting us towards strangeness and subversive planes, perhaps full of pleasure and profundity. His vibrant figurative renderings, landscapes and topsy-turvy domestic interiors lead us to personal and collective imagery. Often humorous and outlandish, Nolan's works are frequently populated by musicians, scantily clad bodies and anthropomorphized critters. These paintings relate to an interplay of myth, desire, and representations tied to both the body and the natural world. While Nolan's works may shed light on the irrationality of everyday rhythms, Lauren Luloff's bleach paintings evoke balance and harmony, as she presents oxalis, begonia flowers, and aloe on their own terms. 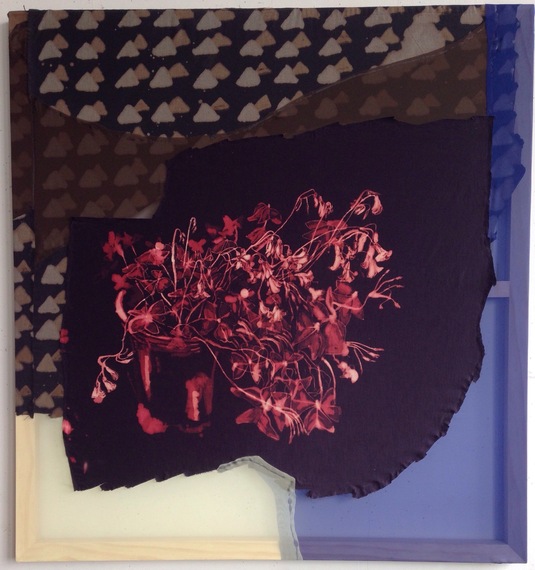