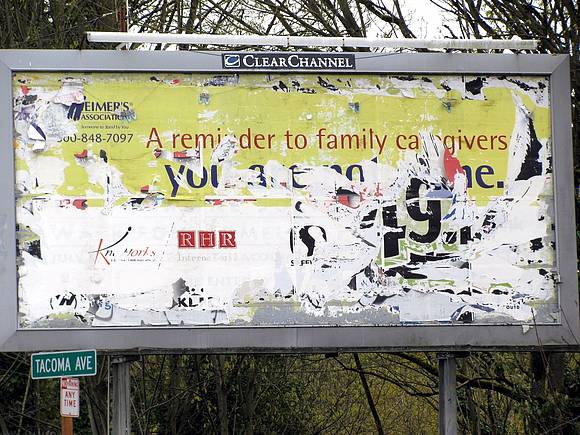 Riding by car or bus last Fourth of July weekend, you may have enjoyed the green hills and valleys, the rust-colored canyons or wheat-covered plains rolling past your window.

If you've admired the natural beauty along our nation's interstate highways, a thanks is due to Ladybird Johnson, wife of President Lyndon B. Johnson, who in 1965 passed the Highway Beautification Act. This Act, highly controversial at the time of its passage, was designed to preserve the views along America's highways by limiting commercial advertising such as billboards.

"Getting on the subject of beautification is like picking up a tangled skein of wool," Ladybird Johnson wrote in her diary regarding the intersection of nature, mental health, and quality of life. "All the threads are interwoven -- recreation and pollution and mental health, and the crime rate, and rapid transit, and highway beautification, and the war on poverty, and parks -- national, state and local. It is hard to hitch the conversation into one straight line, because everything leads to something else."

Forty-six years later, many believe that Ladybird Johnson's vision of beautified public roadways is threatened by the proliferation of massive digital billboards, each capable of delivering thousands of commercial ads to consumers each day.

City councils, community activists, and preservationists are squaring off in cities across the country against corporations like Clear Channel, a communications and marketing company that owns hundreds of radio stations across the country and maintains millions of advertising displays in 45 nations around the world. At issue is whether to permit digital billboards frequently promoting the latest edgy TV shows or beer ads to proliferate in our cities.

Currently, the states of Maine, Hawaii, Vermont and Alaska ban billboards, including digital ones, entirely. Many other states permit traditional "static" billboards but ban digital billboards.

In Seattle's mid-sized sister city of Tacoma, Wa., activists are facing off against Clear Channel in an effort to reduce the number of static billboards in the city and to ban digital billboards in their entirety.

In 1997, Tacoma passed a law requiring approximately two-thirds of the city's billboards to be removed following a 10-year amortization period that would allow billboard companies to recoup their investment.

When the ten years expired, however, Clear Channel, which owns most billboards in Tacoma (having purchased many of the billboards after the 1997 law was enacted), refused to remove their non-complying billboards and instead elected to sue the city.

In what the Tacoma-based News Tribune characterized as a "coup dressed in compromise," the city made a preliminary agreement which would have introduced up to 38 highly profitable digital billboards in the city in exchange for taking down a number of traditional static billboards.

News of the threat of digital billboards being erected throughout the city caused such an outcry that hundreds of Tacoma residents and business leaders, preservation -- and neighborhood groups lined up to oppose the measure. Even former Pierce County Prosecutor and now Washington State Supreme Court Candidate John Ladenburg, Sr. opposed the "compromise" in his letter to the Tacoma Planning Commission:

"Please oppose the video billboard proposal, it would be a terrible blight on Tacoma. This is a bad settlement and you should reject it and continue to fight to clean up Tacoma."

With 95 percent of Tacoma residents who weighed in on the issue opposing the introduction of digital billboards, the Tacoma City Council enacted a six-month moratorium and handed the issue off to the city's Planning Commission, which subsequently recommended banning billboards in their entirety.

Tacoma is not the only U.S. city in which the digital billboard controversy has flared in recent months. In Pittsburgh, activists contend that poorer neighborhoods, storefronts, and row-houses have been obstructed and sometimes overrun by billboards. A local group, Scenic Pittsburgh, has sprung up to protect the scenic views and landscape in Pittsburgh, vehemently opposing the proliferation of digital billboards.

Boris Weinstein, a former marketing executive-turned-community activist who founded Citizens Against Litter, a Pittsburgh-based, anti-litter volunteer organization, stated in an interview: "Billboards are an example of litter on a stick in the eyes of many people."

While many activists point out that Ladybird's efforts did not wholly succeed in limiting billboards, most environmentalists agree that the act has resulted in some limits on the construction of billboards. Its passage also spawned a movement to ensure an aesthetic approach to roadway construction that has preserved much of the natural beauty along many an interstate. Yet the advance of technology is forcing cities to address new threats of visual blight.

Now that we are confronted with the potential for proliferation of digital billboards, it is worth noting that the Highway Beautification Act, whatever its imperfections, did promote respect for our country's landscape that has paid dividends -- not necessarily in anyone's bank account but in our ability to enjoy America the Beautiful and, in the words of author and social critic James Kunstler, to make America more of a "place worth caring about."

If we want to enjoy a skyline saturated with flashing lights, we can pay a visit to Times Square or Las Vegas. But for now, we can continue to enjoy the natural beauty of our landscape when we travel state to state and where we live without being continuously ad-spammed.