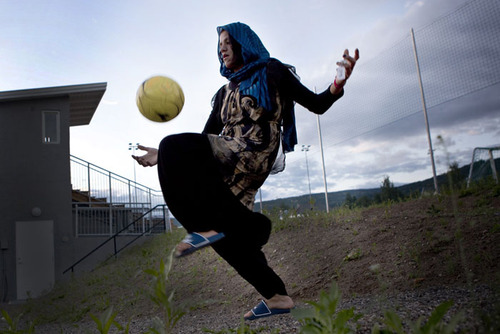 Here is my reality.

I have been contacted many, many times since March 1 when FIFA announced that IFAB formally overturned their decision to ban headcoverings on the pitch.

Family, friends and colleagues have sent me congratulatory notes and news reports.

Since July 2012, I have blogged, written and expressed happiness, hope, gratitude and sometimes frustration with this process.

One more step towards the pitch!

As it should be. I was thrilled initially.

Now, I am exhausted.

I am drained from the process. I lost time away from the sport I have know and identified with since I was a very young child.

I found other ways to be involved, be motivated, and get fulfillment.

I have written and opined about FIFA's stance. I have shared pictures of radiating women who love the game and who defy cultural norms to enjoy it. Those connected and inspired by it.

And those who risk their lives to play it.

What I did not say was how I suffered from sheer resentment and difficulty when I was not allowed to compete.

I am allowing myself to say it now.

I longed for the the thrill of the sprint, and the rush of the challenge.

And the goal. The beautiful goal.

I even craved the hit of the post or the uncontrolled shot that went wide.

I missed it desperately.

What I didn't recognize was those two connections were not mutually exclusive.

I understand the anger and frustration of women who were told "NO." Who were told "NO" by an organization that is supposed to create opportunity and advocate for the Beautiful Game.

I started wearing hijab in 1997. I played my last season in the fall. I was told I had to either "take it off on the pitch" or "wait until I was ready to commit fully to the rules of the game."

There was no specific law against (that would come in 2007) it but nothing allowing it either.

I walked away from the pitch.

My heart broke. But I quickly wiped my angry tears with my hijab. It provided me tight comfort and strength against this sporting injustice.

But I was used to playing in leagues, in matches with referees and full of politics and drama.

I remember watching one of my heroes, Zinedine Zidane hoist the World Cup over his head in glory in 1998.

It was the first summer I did not play.

His victory as a Frenchman of Muslim-Algerian descent was bittersweet for me. He was of my faith. But he was playing.

I practice his roulette anyway. Just in case I might need it someday.

Life went on. I cheered, I watched and I fooled around with a ball. I did not play regularly.

After what seemed like several lifetimes, I found a league that would accept me.

I tasted the joy in the sweat rolling down my face.

I loved it. I stayed for years and then I found the courage to venture out and challenge this.

I found a club that agreed.

And I remember what I always knew: I was a footballer who wore hijab.

Not a hijab-wearing woman who played football.

Fast forward to 2014 when Jerome Valcke announced: "It was decided that female players can cover their heads to play."

Now they are permitted. 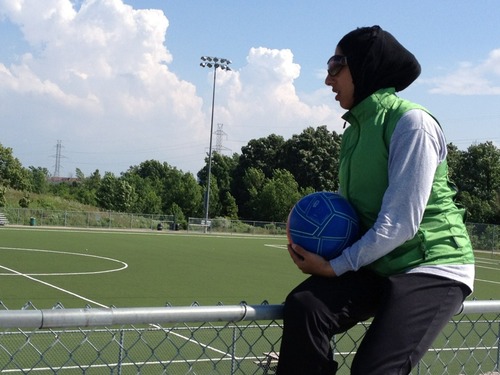 How can I laud FIFA for striking down a law that should have never been implemented in the first place?

How can I be grateful for someone allowing me to do what I should have always been allowed do?

Why was I made to choose?

How can you choose between your heart and soul?

Thank God my daughter won't have to face that choice.

Someone pointed this out to me: "Funny how the West tells us that hijab is oppressive yet they use it to oppress hijabis by banning them from playing sports."

That isn't funny. It is horrible.

Last year, I was sidelined from football due to what turned out to be a full blow out of my ACL. Being ripped away from the game in this manner was painful. But it was of my volition. I was injured in a match, while in play. My choice.

Being ripped from the game because a lot of white, privileged men decided it was dangerous for me and the sport was torturous. Their choice.

And it was unfair.

So, today I am not "happy." I am disappointed that I lost time and energy.

My joy is tapered with simple relief.

In future, I will not let it ruin other childhoods and affect and exclude people.

Football is for all of us.

It should always have been.

Shireen Ahmed is a writer and advocate focusing on Muslim women in sports. She writes regularly on her blog, Tales from a Hijabi Footballer.

Writer and advocate focusing on Muslim women in sports