The depiction of a pseudo-Muslim woman in a pornographic movie might not be as bad as you think. I am not saying that to be cool or edgy. The depiction is a poor representation and could impact the lives of Muslim women in a negative way. Rather, I want to offer some historical context and, with it, offer a different way to read the situation.

More importantly, I want to dissipate the negative emotional response to the situation. In the past week, I, as a Muslim, was also asked to react emotionally to the killings at Charlie Hebdo. But I was not just asked to do so by the unsurprising contingent of people who would ask that of me and yet feel no need to emotionally react to violence committed against Muslims.

No, the people asking me to react were the people who have the most influence over me; they were fellow Muslims. Of course, sex and violence are extremely powerful topics. It is natural to react strongly. But by reacting on an emotional level, we feed our nafs, emotionally exhaust ourselves and accumulate toxic energy. Let's try to stop doing that to ourselves.

When it comes to current conversation about hijabi pornography, I really wanted to leave it be. Other Muslims have dissected the situation. However, they asked me to be angry and I, knowing that the pornography industry is what it is (if something exists, there's pornography of it), that merely being angry will change nothing, felt no need to be angry. I understand the anger. But I want to offer an analysis that suggests the situation is not as bad as you might think, and certainly not to be taken too personally.

First of all, Muslim women have been fetishized before, but in the majority of recent cultural memory, Muslim women have been depicted as veiled, oppressed and submissive under the thumb of Muslim men. Rhetoric for the invasion of Muslim countries, as in the case of the War on Terror, has been filtered through a lens of pity for Muslim women; American troops rallied for their supposed need for white saviors. This imagery was not created in the era of George W. Bush. It has been the norm for Western countries to represent Muslim women this way since the 18th century, as Mohja Kahf points out in her book, Western Representations of Muslim Women. Interestingly, though, as Kahf also points out, in earlier periods, when the Islamic empire was more powerful and Europe perceived Muslims as threatening, the West depicted Muslim women as sexually empowered, and intimidatingly so, as dominating queens.

Currently, the sexual depiction is a fantasy, and could just be an extension of the existing narrative of Western domination and invasion. In contrast with the opposite portrayal, though, it seems that the stakes of invasion are higher. Mia Khalifa, who is not Muslim but can still be seen as a depiction of the Muslim woman, is unapologetic and widely defended against negative reactions from the Lebanese community in her right to be so. Does this mean there exists a highly popular depiction of a sexually empowered, financially independent Muslim woman?

More to the point, is the popularity of her work a sign that tides are shifting? Have the stakes been raised to the point where the objective is not just the freeing of the oppressed Muslim woman but the reward of the sexy Muslim woman? In other words, is the sexualized depiction of the Muslim woman a sign that general enthusiasm for invading the "Muslim world" is weakening? Do other depictions of sexy pseudo-Muslim women, such as Princess Jasmine or Jeannie from I Dream of Jeannie, also turn up at other points at which the West is losing the upper hand or morale is otherwise low, and extra incentive becomes necessary? Honestly, both sexuality and the situations are too complex to really determine. This is simply another way to read the situation. And, either way, we do not have to be angry or feel victimized.

In every scenario above, Western depictions of Muslim women are more of a reflection of the West and its insecurities than they are of real Muslim women. Just try to remember that.

Rubayya Hoque is a recent graduate with an M.S. in Library and Information Science from the University of Illinois at Urbana-Champaign, meaning, yes, she is a librarian. Previously, she studied postcolonial, vernacular, and American literature for her B.A. from St. John's University in Queens, NYC. As a Muslimah, feminist, and nerd, she is an advocate for pluralism, equality, and community. 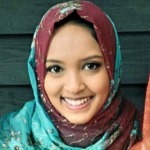 Coming of Faith believes in the power of stories. We're founded on a simple idea: minority voices deserve to be heard in an inclusive and thought provoking space. This post was originally published on Coming of Faith.

Other recent stories include:
I got pushed out of Hillel because I was pro-Palestine
The day I stopped saying yes
My pain healed when I forgave
Strip searched at the airport