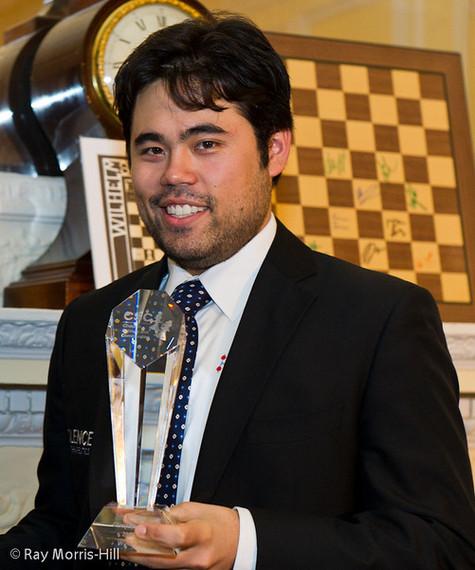 It has been a good year for Hikaru. In classical chess, he moved to the third place on the January 2014 FIDE rating list behind Magnus Carlsen and Levon Aronian, and ahead of Kramnik. The faster the time control, the better Nakamura plays. The rapids in London were made for him.

The London organizers used the FIFA World Cup formula, dividing 16 participants into four groups with two players from each group advancing to the elimination rounds. Nakamura and Boris Gelfand were in the same group and ended up playing the final.

Nakamura eliminated Nigel Short in the quarterfinals, Kramnik in semifinals and beat Gelfand in the final, all with the score 1.5-0.5. His match with Kramnik was shaky, but the Russian played as if under a spell. No matter what the position, Kramnik tends to trip up and becomes Hikaru's victim.

At the World Team Championships last month in Antalya, Turkey, Nakamura outplayed Kramnik in a positional masterpiece, using the square c6 as an outpost and winning a tactical skirmish in the end. With this victory, the U.S. team beat Russia with the score 3 -1, although the Russian team eventually took first prize ahead of China and Ukraine. The U.S. team finished fourth. 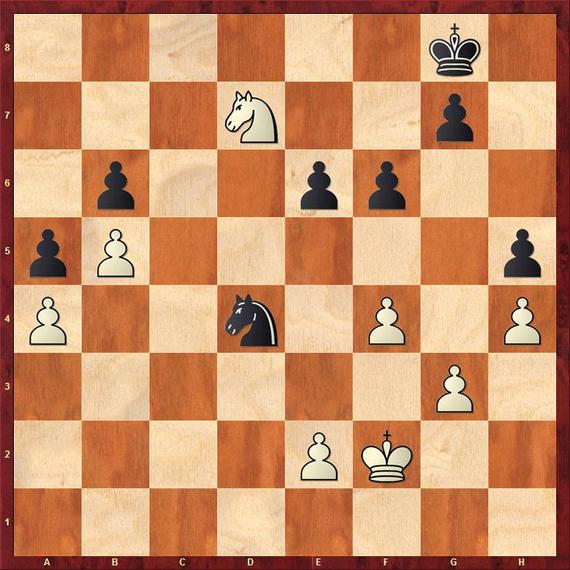 With the white knight deep in black's territory, Kramnik unleashes a spectacular combination. It sets the a-pawn into motion, making it seemingly uncatchable.

An astonishing refutation. Nakamura returns his knight and his b-pawn runs faster.

White is a piece up. Game over. Kramnik made 10 unnecessary moves before he resigned.

In the quarterfinals in London, Kramnik eliminated Anand and initially played well the first game against Nakamura, reaching a winning position. But imprecise play left him few options and he blundered.

After 64 moves the players reached the diagram position below. It is difficult to imagine the game ending in two moves. Sometimes mishaps happen even to world champions. 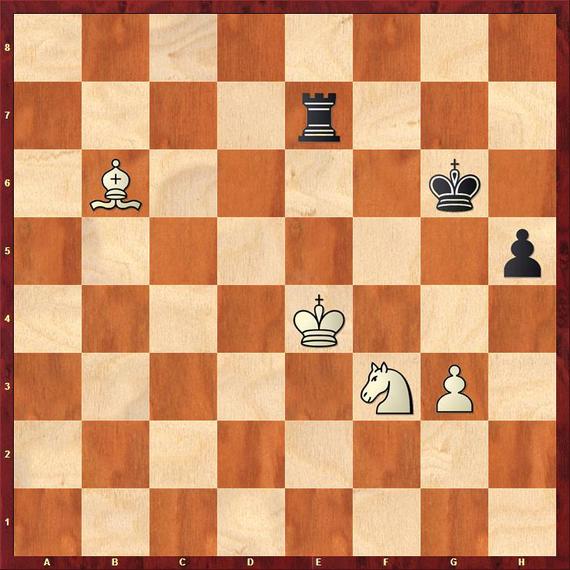 One move blunder. After 65...Kh7 white can still play, first trying to win the h-pawn. It could be a long torture, but Kramnik ends it at once, walking into a pin.

The sharp Grünfeld defense game turned out to be decisive in the Nakamura - Gelfand final. Both players knew where they were headed, having played the Hungarian line recently. It seemed that the 45-year-old Israeli had Hikaru on the ropes. Although being an exchange sacrifice down, Gelfand's pieces cavorted all over the place. Nakamura had to tread carefully. Finding difficult moves, the American eventually put his opponent in a bind and Gelfand succumbed to the pressure. 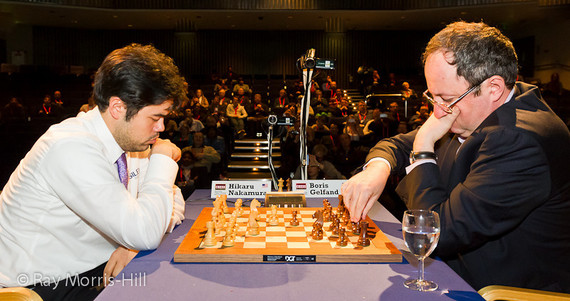 The Russian system, one of the most complicated and dynamic lines against the Grünfeld defense.

The Hungarian answer, planning a quick expansion on the queenside.

An old attempt to refute the line by sharp, forcing play. Most positional players simply develop with 8.Be2.

A critical starting position from which the line either rises or falls. 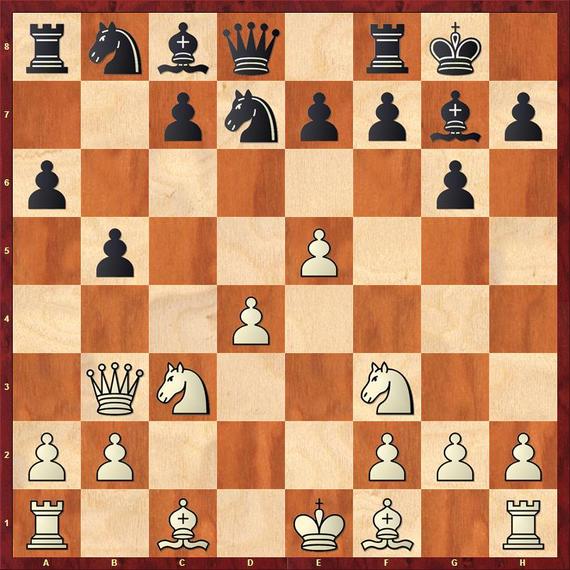 In his extensive 400-page treatment The Grünfeld, published by Everyman Chess, David Vigorito calls it extravagant. "But it supports the break e5-e6 and the knight may come to the e4-square," he writes.

The attack of the d-pawn is rather recent. Black also plans to force the white queen from the diagonal a2-g8 with Nc6-a5. But black may have time to undermine white's center with the c-pawn: 10...c5. I have added some lively variations, checked by Houdini 4 Pro, to the replaying window below.

Nakamura makes a risky decision to win the exchange. Otherwise, black is fine: After the bizarre 11.Ne6 Na5! is the best. The solid 11.Be3 Na5 is equal. 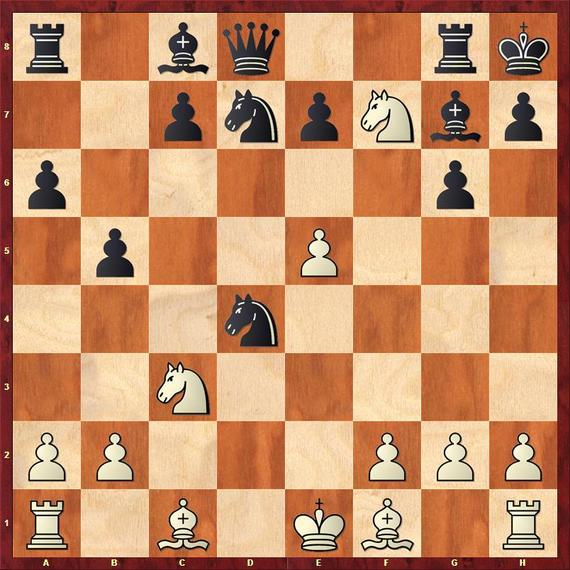 White has the exchange, but the black pieces come quickly to life.

After some thought, Hikaru decided to keep the tension instead of surrendering the dark squares with 16.Bxd4 Bxd4. 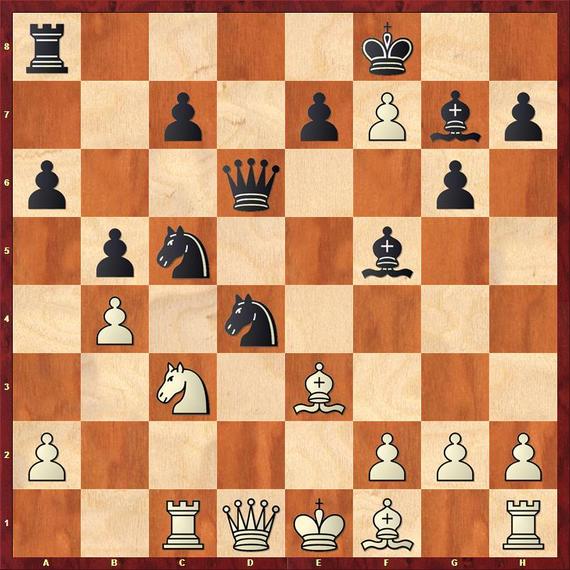 Exchanging pieces is good for white. The retreat 17...Nce6 was preferable. But black had a spectacular way to continue the attack: 17...Rd8! 18.bxc5 Qe5 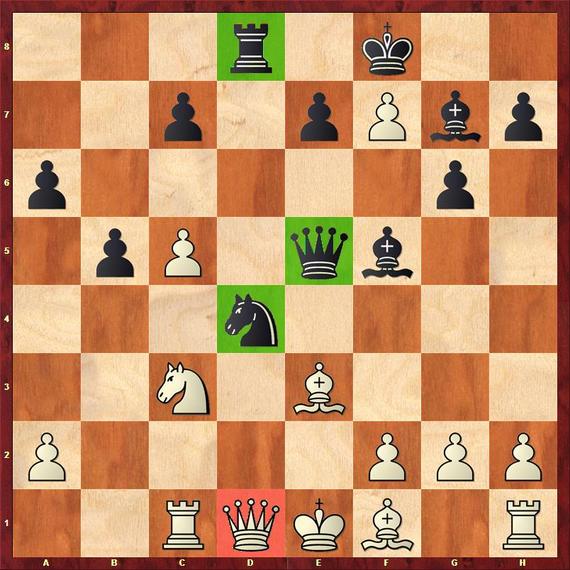 Black is a rook down, but the threat 19...Nc2+, winning the queen, can't by stopped. White would have sufficient material, but has to figure out how to develop his kingside. Something similar happened almost 74 years ago in the game between Edward Lasker and Rueben Fine (you can replay it below). 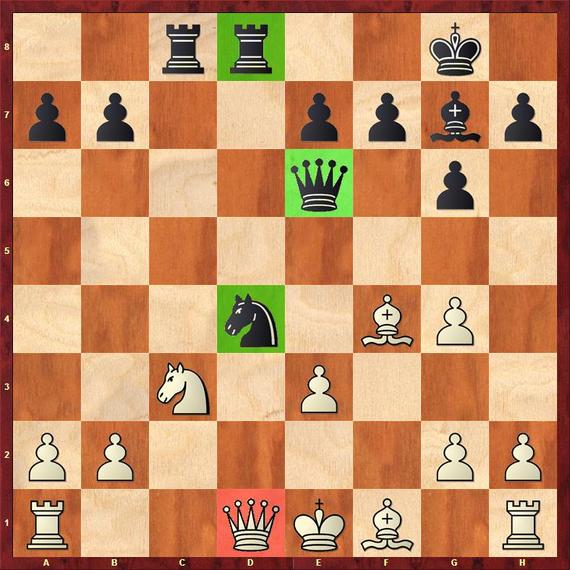 In both cases, Black has a dominant knight in the center supported by the rook and the queen is pinning on the e-file.

There was no need to give up the c-pawn. Gelfand could have protected it with 22...Rd7 before starting any action. The strong knight gives him excellent compensation.

Obviously satisfied, Hikaru left the table for a few moments. 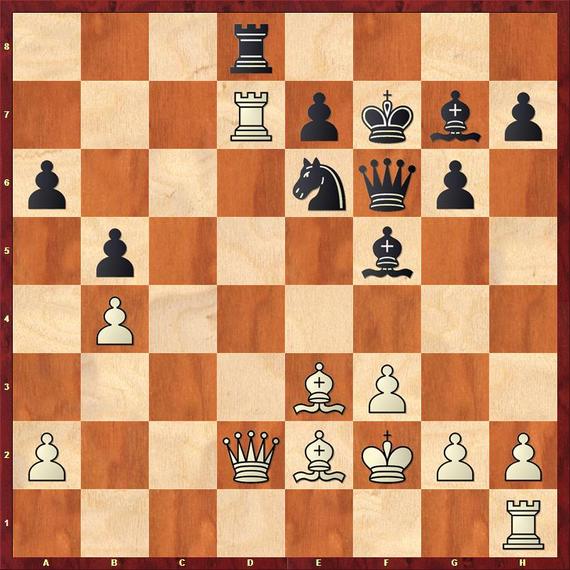 White should be winning and Nakamura plays well the technical part.

Increasing the advantage, although the computers are asking for 25.Bd1, followed by Bd1-b3. The light bishop would cover the square c2 and at the same time pin the knight on e6.