Like many women who watched the movie Wild, I was inspired by Cheryl Strayed's courage and how she was able to turn her grief and desperation into triumph. And I wondered if I could do something similar -- turn my own form of grief and desperation into triumph by spending several months hiking a treacherous trail from border to border (or a particular portion, thereof), with very little experience, camping in tents or lean-to's along the way, eating dehydrated food while fending off an array of wild creatures. My answer? Heck no!

And then I went out and bought a tent.

Turns out it wasn't the right kind of tent for such a long hike (it was a giant six-person tent that you can stand up in), but I still bought it. And it sits proudly on my kitchen table in its original packaging. 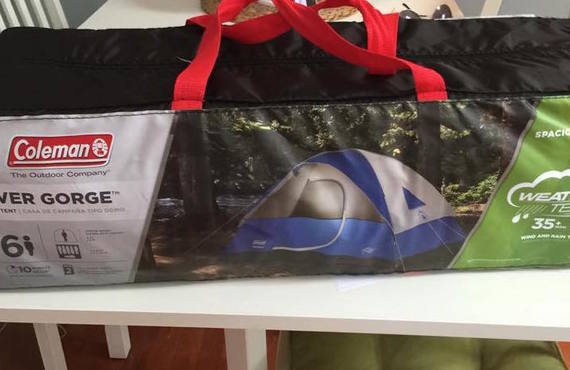 But still, I wondered...

I am the type of woman who likes a challenge. I challenge myself all the time in the intellectual realm, the career realm, the emotional realm, the interpersonal realm, and in just about any other realm, for that matter, except the physical realm. I have never been athletic, mostly I imagine because I hate physical exertion. There. I said it. In the era of "biking-hiking-camping-marathon-running" I, Michelle Martin, am what you might call "indoorsy." I don't like to be hot. I don't like to sweat. I don't like pain. I have no tolerance for bugs. And wide-open spaces scare me.

But perhaps I'm being too hard on myself and presenting myself in a way that isn't completely accurate. I have done some outdoorsy things -- I stayed in a cabin with a bat as a roommate for eight days and seven nights (while wearing a towel over my head and screaming). I fished for years because my son loves the outdoors. And once I climbed to the top of a volcano in Rwanda to see mountain gorillas (think Jumanji).

Mostly though, I'm not a fan of nature, as the following text exchanges with my son reflect: 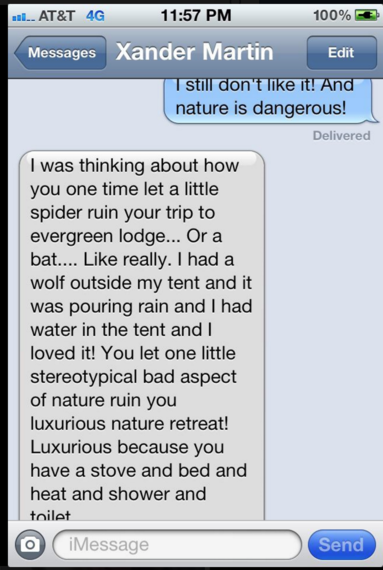 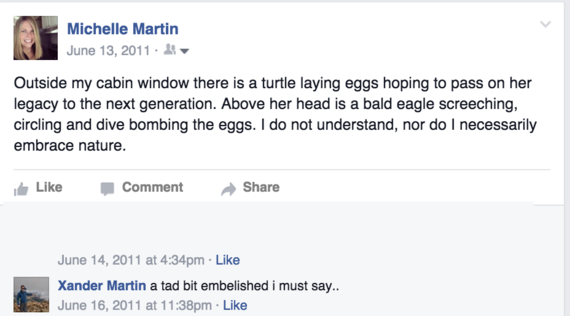 Over the years I've attempted a range of different physical activities, all to no avail. In the '80s, I was the only person in my Jazzercise class who couldn't swing her hips to the music. In the '90s, I was the only person in my step aerobics class who actually fell off the step (more than once, in fact). I had a tepid relationship with the elliptical for almost three years in the mid-2000s. And although I didn't mind it, when I quit during a busy writing season, I felt no compulsion to jump back on. And then there was last year's love affair with yoga. I still love yoga, I really do. I have no explanation for why I quit. Perhaps it was the exorbitant cost, I'm not really certain. But quit, I did.

Which leads me to my ultimate point: I am the last person in the world who should be contemplating hiking any formidable trail that involves so much athletic ability, physical exertion, living off the land and sleeping in a tent, even for a single day. I couldn't even manage a few nights in an Airbnb last month when I was traveling on a budget. I stayed one night and when I was told there was an aggressive squirrel that kept getting into the room where I'd be sleeping, I packed up my things and moved right on into the Hilton. I am destined to fail. I have no qualifying traits. I'm not in the greatest shape, I hate to work out, I don't like the outdoors, I get blisters just walking to my car, and I have a "can't do" attitude.

Can I? Can I enter a world I know nothing about, where I always seem to feel like an interloper? Can I challenge myself to get into shape, in the long-distance hiking sort of way? Can I endure discomfort of the physical kind?

I began blogging about my life as a middle-aged, empty-nesting, single mom a few years ago. When I turned 50, my son left (me) for college, and I began to ask myself "what's next?" and I found I had no answer to that question. Through writing and hearing from post-50 women across the country, I've come to the conclusion that perhaps, growing older doesn't have to be all about loss. If we play our life-cards right, the decades after our 50th birthday can be a transformative time, filled with more passion, more creativity, more honesty, and bigger dreams.

And then a few weeks ago, my dear friend Dr. Shirley Albertson Owens, who is 71-years young, posted a status on Facebook about Emma Rowena Gatewood, the first woman to hike the entire 2,168 miles of the Appalachian Train, at the age of 67. Shirley posted an article about Gatewood's adventures with the challenge: "Who wants to do this with me?" I have no idea what possessed me, but I responded immediately: "Me! I know I seem like the most unlikely candidate, but just think of the fun and adventures we'd have!"

And just like that, a grand idea was born.

Initially we pondered hiking the Pacific Crest Trail, but then we thought better of it -- two always hot, post-menopausal women hiking in the desert is probably not particularly safe for the wildlife. So the Appalachian Trail it is.

In a recent blog post I wrote about how women in middle adulthood could make transformative changes in their life by taking just one step into the unknown -- doing one thing differently today than yesterday. And then sit back and watch what happens. So perhaps this is my one step, not the hike itself (yet), but saying yes.

So today I'm going to start preparing to hike the Appalachian Trail, not because I believe I can actually do it, but because my friend Shirley believes that I can. We're jumping on a trendy bandwagon of sorts, and we likely will not hike the entire trail (far from it), and we're bound to run into some naysayers -- those folks who believe we are foolish for even trying. But this is our one step to show the world and ourselves that even though we're over 50, our lives can be filled with new opportunities and grand adventures. Whether we make it one mile, or 1,000, it doesn't matter, because at least we're daring to dream.

Learn about Michelle Martin's writing and other work on her website, Aging Naked™