There is a family I know well, and there are four daughters, close in age and the best of friends. Now check out this hilarious photo they posted recently and then gave me permission to write about the back story, which explains the comedy of the photo. 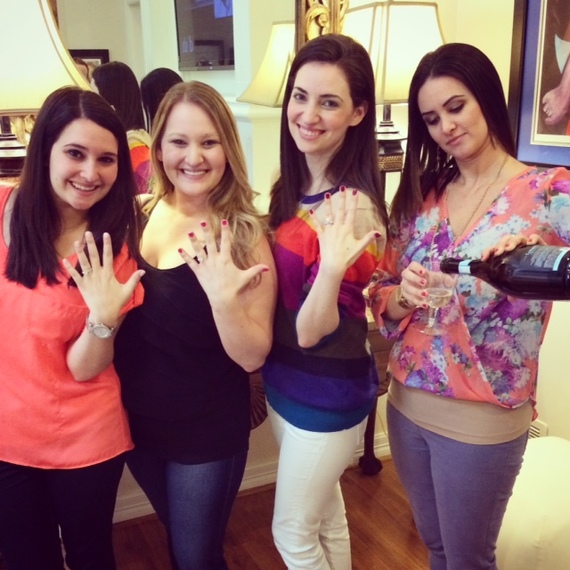 Lauren, a popular disc jockey on a top 40 Houston station, is the oldest daughter and happily unmarried at age 32. She is the one on the right, drinking champagne. Her sisters from left to right are Melanie, Melissa, and Amy, all engaged or married. This was taken by Lauren's father Mark during Lauren's youngest sister Melanie's engagement. One by one her younger sisters have all found Mr. Right and have gotten engaged or married.

As Lauren is acknowledging in the shot, she knows the barrage of well wishes for her sister will include many inquiries among Lauren's relatives as to when she, as the oldest, is going to find the right one and settle down. "I've been asked so many times when is it going to be my turn, I've lost count," Lauren says. It is questions like that make her want to drown them out in said champagne.

Yet, the photo is also about her genuine happiness for her sister and her way of toasting her sister's engagement.

Most of all, it shows her terrific sense of humor. In fact she told her father that her birthday gift to him is his not having to pay for her wedding this year.

You could not find a more close-knit family than Lauren's sisters, ranging in age from 32 to 26, and their parents. One of her sisters is Lauren's roommate and another lives in the same apartment complex. Her other married sister Amy is just five minutes away, and Lauren visits daily to see her little nephew. The four girls socialize together, shop together, eat together, and there is hardly ever a time where you see one without the others.

It must also be noted that Lauren is completely happy, independent, and successful. So to me, this photo celebrates that very self-confident, content but single oldest sister, along with a wry nod to those inquiring minds who are in a hurry for her to get married.

Check out my regular blog here.

Visit us over on Pinterest for more love and marriage advice, stories and humor!