"We travel with her and take the same uncertain path, entering a moisture-laden palace that twists our minds."

Artist Hilary Brace has been using an old material (charcoal) and a new one (plastic) to invent images of clouds, ice and waterfalls. Simultaneously suggesting the artist's sense of awe and her consciousness of nature's fragility in the face of global warming, Brace's recent body of work manages to seem both tangible and imagined.

I recently interviewed Brace and asked her about her background, her working methods, and her ideas. 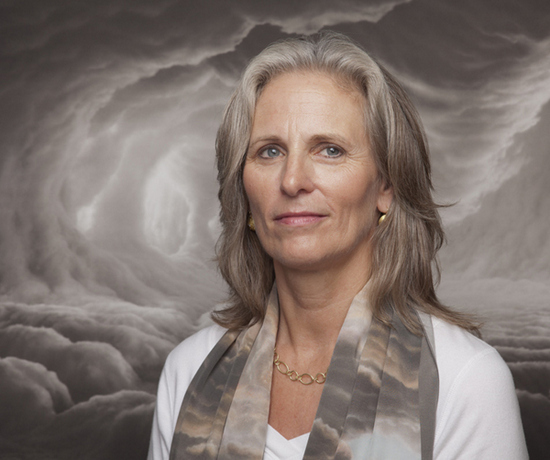 How did your early life shape you to be an artist?

When I was young my family lived in Europe for a couple of years and we visited a lot of museums, so very early I was introduced to the importance of art and to the idea of being an artist. I also remember being very determined and particular about my art projects, wanting badly to realize them in the way I imagined them. Later, with the opportunity to take art classes in middle school, I developed confidence about making things. So I was fortunate that a natural inclination was met with opportunities. It made my choice to become an artist feel natural and worthwhile.

Spending most of my early life in the Pacific Northwest, around such abundant natural beauty, undoubtedly had an impact on my work. I was always so moved by the grandness of the landscape and the displays of light and atmosphere. We went skiing often, and I loved being in the mountains, looking down at the landscape, and sunlight falling on snow seemed incomprehensibly beautiful. My work has had a lot to do with being moved and mystified by these things. 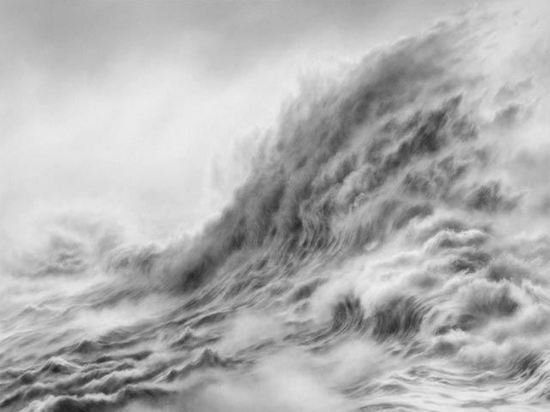 Have you always been a representational artist? What was your work like during your college years?

When I began studying art in college I worked abstractly but I usually began with something observed, something to do with light. My first serious paintings were equal parts abstraction and representation, with shadows handled as two-dimensional pattern in a three dimensional context, usually architectural interiors. I love the challenge of describing space, so as time went on this dichotomy between two and three-dimensional space became more representational, more integrated. I realized from making those paintings that they said something about how I perceived things in general; that reality is elusive and shifting.

For years the work was more about this kind of play of light and form in space than depicting any specific place. Once a horizon line crept into the imagery and it moved toward landscape, that part changed. 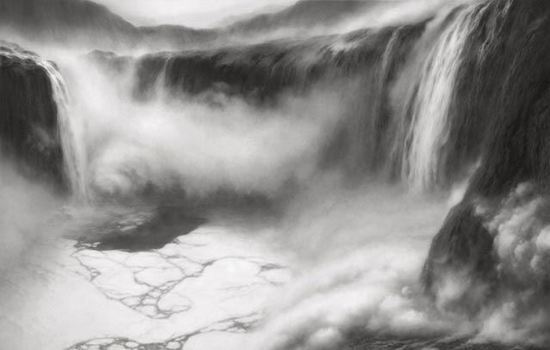 Your work balances between the real and the imagined. How do you blend and balance these two approaches?

It's really another expression of the dichotomy I was exploring in those early paintings, but more complex. I'm interested in making places that seem very tangible or believable, but I also want them to also feel elusive and mysterious, or fluid and changing, so I retain my sense of wonder about them. I work from my imagination and I don't know what I'm going to make when I set out, so I keep myself in that space as I'm developing the image: At the same time I'm working with realistic aspects of rendering an image, I'm surprising myself by discovering an unexpected world.

When people first see a drawing they often assume it's "real" because it's so fully rendered, but then they become confounded by how that could be true, given the subject matter. Those different responses have to come together finally in their experience of the work. I like that, because it mirrors my own process in making the work. 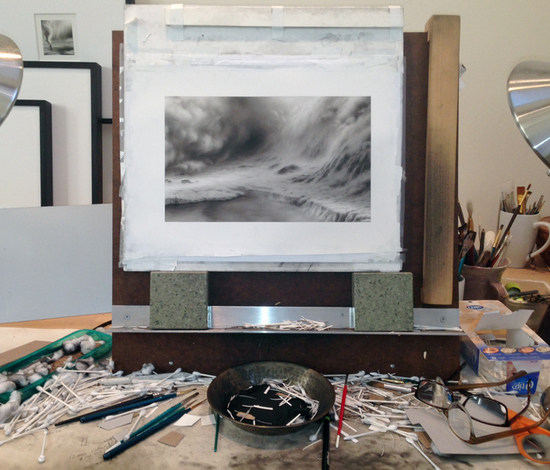 Tell me about your technique and how you arrive at an image.

My drawings are charcoal powder on polyester film (Mylar is a brand name). The matte polyester surface appears completely smooth, but is actually like super fine sandpaper. The charcoal moves around easily but also comes off easily. This allows for a lot of spontaneity, but also a lot of detail. On smaller pieces, I begin by covering the surface completely with charcoal, then erasing or lifting it off with Q-tips and brushes to reveal lighter areas. As an image begins to suggest itself, I slowly bring it into focus with more detail.

For larger drawings, I make a study first. I use Photoshop as a composition and drawing tool, but in many ways the process is the same because I have no preconceived idea of where I'm headed and the image develops through exploration and then slowly comes together. Even though I know what the image will be when I make a drawing from a study, I still work in a subtractive way, laying down darker values and erasing to create lighter ones, because I have more control removing darks than adding them. 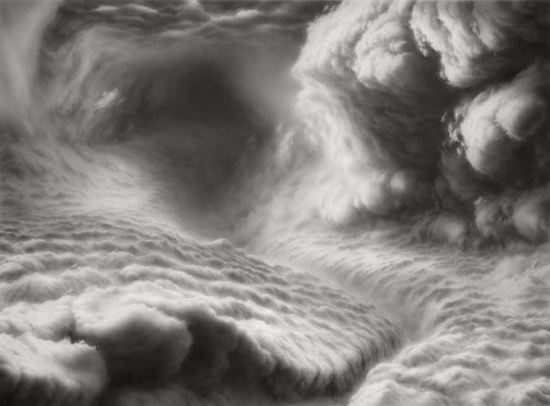 Do you consider yourself a Romanticist in art?

I believe that intuition and emotion have a place in making and experiencing art and I'm inventing emotive images, but they aren't about escape or yearning for some other, ideal place. They have much more to do with my actual responses to the natural world, with making those and my psychological framework feel real. I use curiosity and my emotional responses to make choices about my imagery, so feelings are important in a variety of ways, but it's not romantic. I think of myself as an experiential artist. 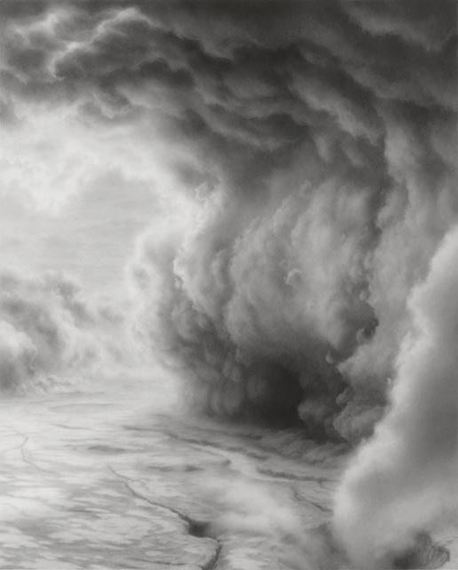 What kinds of emotions do you want your work to evoke?

As wide a range and as complex as possible, because that's what life is like.

But that said, as a drawing begins to suggest itself, I go after a feeling that seems unique to that image. It might change as the piece develops, but it's a guide. There's a quote by Howard Hodgkin that I've always remembered: When he was asked how he knew if a painting was finished, he said, "When the original feeling comes back as a painting." I like that. 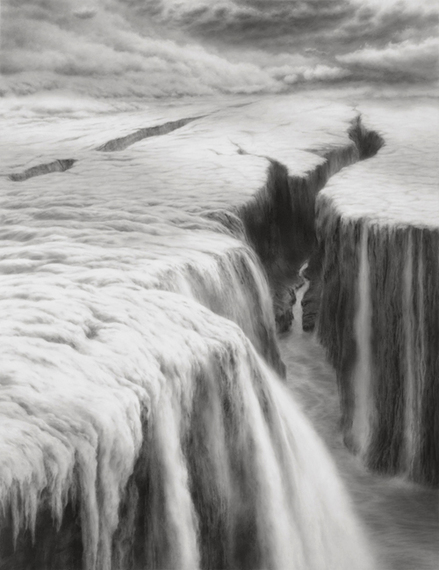 What about your feelings about nature and global warming? Some of your recent work depicts icy places that appear to be thawing.

I've been thinking about this a lot. I can't look at my work now without also thinking about what we are doing to the Earth. For a very long time, I've been inspired by nature as something vastly powerful and it's been a metaphor in my work for a range of forces larger than ourselves. I've been thinking about how to reconcile that view with the fact that we need to see the Earth as fragile and vulnerable if we are going to change our behavior. All the forces that have shaped the planet will always be present, even if we destroy it, but the loss and potential loss are excruciating. So my perspective is shifting and it's showing up in the work. There is plenty of reason to feel a sense of awe about the beauty that exists and it ought to motivate us, so I'm glad if my work can be a reminder. But I want it to do something more or different than that, for myself, so it seems that I may have to find a new way to see. 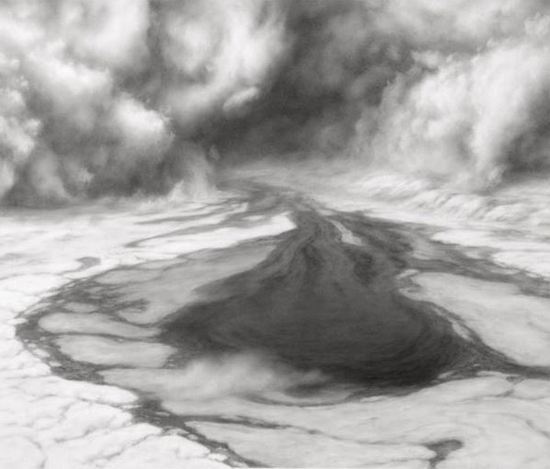 Mainly gardening. I've spent most of my free time developing my garden. I'm a plant fiend--even thinking about going to the nursery makes me salivate. Designing in the garden is a lot like painting, but you also have the elements of time and change, which is fun to think about and observe. But now that my garden is established, I'd like to expand my range and get out and explore, to see more of the changing, shifting world.