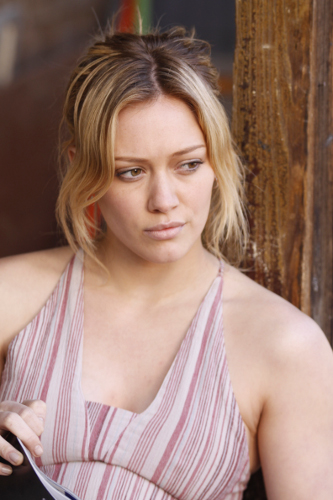 As she says later in our interview, Hilary Duff likes a good challenge. The number of former child and teen stars who manage to sustain their success into their twenties, as Duff undeniably has, are few enough already, but even rarer are those who then develop into serious adult actors. Slowly, though, and almost under the radar, Hilary Duff has been turning in noteworthy, character-rich performances in a variety of lower-budgeted independent films, including According to Greta and Stay Cool, both released in 2009. And, in this writer's opinion, Duff's strongest onscreen work to date is hitting theaters this week, with her nuanced turn as a good-hearted, but troubled, teen in the Southern gothic family drama Bloodworth.

Based on the novel Provinces of Night by William Gay, Bloodworth centers around a seriously dysfunctional, eponymous Tennessee brood, which reaches its tipping point of infighting when the long-missing patriarch, E.F. Bloodworth (Kris Kristofferson in a poignant turn), returns to them after 40 years. His three sons Warren (Val Kilmer), Brady (screenwriter W. Earl Brown) and Boyd (Dwight Yoakam) have some serious issue to work out with the old man, and caught in the middle is E.F.'s grandson, the sweet Fleming (Reece Daniel Thompson). Fleming meets Hilary Duff's Raven, a small town girl with very big dreams, and together, they realize they might be each other's only chance out of the tentacles of a southern family with dysfunction enough to give Tennessee Williams nightmares. 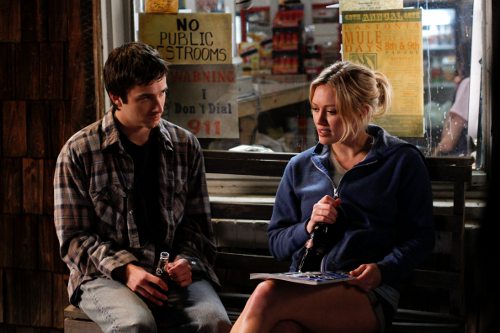 Duff launched into stardom back in 2001 via the popular Disney Channel series Lizzie McGuire, which she parlayed into a succession of hit movies including Agent Cody Banks and Raise Your Voice, as well as a singing and touring career which has included two platinum albums. Her success has continued today, with popular guest-starring runs on shows such as Gossip Girl, the launch of her own clothing and fragrance lines, and her writing of a fiction book entitled Elixir, released last year, which made the New York Times best seller list.

You really disappear into your role as Raven, in Bloodworth, in a strong performance. Was there any process you utilized that helped get you there?

Hilary Duff: I think just working on an independent movie... There's a lot of freedom, a lot less pressure, a lot of time to play, with the director, Shane [Dax Taylor]. He's good. I mean, he's very quiet, so he's not the guy that's going to give you in detail... a totally detailed description of what he's looking for, unless you really ask. But he'll just let you go. And I think for this, that was the perfect attitude for him to have towards the actors because we all got pretty close and really just worked off each other.

I did, I did, and I know it's a different character for me, but honestly she's not... she's still a good-hearted, sweet person, and so I think that it wasn't a struggle of me really trying to get to a dark place, even though there's so much darkness around her, you know?

I did a little stuff for the accent, research... but I'm a Southern girl, too, so I found that pretty easily. And then just being in our surroundings. I mean, we were deep into the woods.

You shot the film in the Carolinas, and you can almost feel the heat in the air during some of the outdoor scenes.

Yeah, it was hot. It was really hot during the day, and then freezing cold at night. And it was just kind of depressing all around there. Everything's beaten down and broken down, and so it takes you to that place easily, I think. 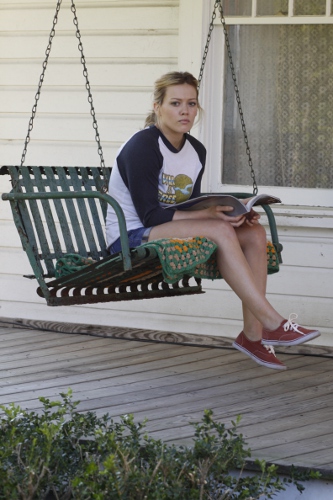 Something else I appreciated about the film was the attention to the little visual touches, such as the copy of Vogue that Raven buys and carries about. That was heartbreaking.

Yeah, she's a sad girl. But I mean, it was fun for her to see this guy who's like this bright light in her life, and just know that he's her ticket out, and she just grabs onto it, and it's all about change. She didn't have any good examples set for her, and it's just nice to see these two kids that make it out of this whole situation.

Was there a point a few years ago where you just definitively said to your representatives, "I need to find character-type roles?"

I mean, everything is such a team decision, and when I got off of my last tour, which was four years ago, I kind of said to myself, "I'm tired of doing that. I need a break." And then, once I was taking my break, I was thinking, "How am I ever going to make this transition?" It was really important at the time to come up with a plan of how I'm going to be happy; how I'm going to get the projects I want; how I'm going be perceived the way that I want, you know, and to kind of break the mold.

I grew up in people's living rooms, and so they know me as this little blond, perfectly-relatable girl. And that's fine. But kind of, to make that transition, I felt it was important to take a step back and get out of people's everyday of seeing me all the time. And I tried to do that, and I chose projects here and there just to keep myself busy.

And I was pretty picky about what I chose, and, you know, now I want to make a record again. Now I feel like it's a good time, because I am all grown up... I'm a different person now, and I think people have kind of accepted that, and are more open to seeing me in projects like this. So, obviously, if some big blockbuster movie came along, and wanted me for it, I would do it, but I felt the independent route was nice for me, just to get to work with people that I appreciate, and do things to be seen in a different light, I guess.

It seems like it would be a difficult balance in choosing projects, because you probably want to keep one foot with the audience that grew up with you when you were a teen and child star. At the same time, you want to get taken seriously as an actress. The cliché is: former child star wants to get taken seriously as an actress, so she goes and plays a prostitute or a drug-addict. And I'm sure those scripts came across your desk.

Yeah, they did, they did. And if it had been a great project, I would have done it, you know? But I'm also was never the one who was like, "Oh, I'm eighteen, now I'm going to go party and get my photo taken with no underwear on." I mean, it was never my shtick. So everything I do, I think about. I'm a Libra, so I think about every option before I do it. I did the movie with John Cusack, War, Inc., and that was pretty out of character for me. But then I did Gossip Girl. I felt like doing Gossip Girl really was for my fans, because they were at that age where that's what they were watching and it was more mainstream.

And I do, I feel... a responsibility, you know, to find that balance, and I'm not trying to be this weird, artsy, only-do-independent-movies type of girl. I'm just trying to do what I like.

I think the first independent film I recall seeing you in, when you were an adult, was According To Greta, a few years ago.

That was a good experience for me. That was the first time I went away to do a movie completely alone, so it felt kind of scary, but, also accomplished, you know, because I was taking something on that's unknown, I guess. It was fun. It was very low-budget, but we filmed it in Ocean Grove, New Jersey, and it was just the perfect setting. We had a really great crew, and I felt all "independent," which was good.

Was there an adjustment period that you had to go through, working on a low-budget shoot, without all the bells and whistles?

Not really. I mean, honestly, it's weird to say this because it seems like I'm saying it and it's not really true... but I'm pretty easy. I mean, I don't have a big team of people that travel with me and I'm not that fancy.

I had the funniest little apartment that they rented for me, on the same block of the house that we were shooting in. It was all painted Easter-egg colors and had cat sculptures everywhere, and it was just some lady's apartment that she let them rent for me, and it was so funny. It was not all fancy, but that was one of my favorite experiences.

Let's talk about your first book, Elixir. How long ago did you start on it?

I started right after I finished Gossip Girl, so it was around two years ago. And when I was in New York, I met a literary agent, just randomly, out, and they were like, "Have you ever thought about writing a book?" And I've written music, which is totally different, obviously, but I've always felt like my job, and the things that I've done are very much like storytelling, and so I knew that I could come up with something. And I called them up a month or so later, and I said, "All right, I have an idea. Can I pitch it to you, you know? Is this worth acting on?" And I met with them, and he says, "How do you want to do this? It's great, and I think people will be interested in it." I got with a co-writer and we just started writing, so the whole process for the first book took about two years.

And then, I just wrote the follow-up novel --

Uh-huh. It's called Devoted. And it was much easier the second time around.

You knew the characters this time.

Yeah. And the story... we knew where everything was going. And a lot of the answers, 'cause it's quite complicated. But it's fun, you know, it's not my calling, but I like a good challenge, though, and that's what it was.

Bloodworth begins its theatrical run on Friday, May 20th. The official website for the film is here.

Filmmaker, Editor at The Hollywood Interview.com