Hilary Harkness has very impressive credentials. She graduated Phi Beta Kappa from the University of California at Berkeley, then received an MFA from Yale. She blogs about painting for the New York Academy of Art. Since 2004 she has been represented by the Mary Boone Gallery in New York. She was recently profiled by The Art Economist magazine in its "Artists to Watch" section. She paints elegantly, and writes eloquently about her art. She graciously agreed to do this interview by email.

Q: As an undergraduate at Berkeley, you studied biochemistry and art. Were art and science connected for you? Does your background in science affect your art?

HH: The most important thing that influenced both my love of science and art was a childhood where thinking and making were confluent.

In my family, if you wanted something, you either made it or grew it. When we needed a back door, my father used a chainsaw to make a hole for it. He also crafted custom fishing poles, drew with a woodburning pen, and made furniture on a lathe. He works at a paper mill, so I grew up with lots of large pieces of paper and other art supplies. In a nearby forest I captured frogs, whittled spears, and looked for edible plants. I made my own moccasins. It was a back-and-forth between imagination and creation; neither was an end.

Later, I studied violin with the legendary David Updegraff (I was given a violin after trying to make one myself), and I was also very good at mathematics. To me, it felt like learning music strengthened my brain for math (and vice versa), a hypothesis I know is now being studied using new brain-imaging technologies.

Abstract ideas can be thought about by making concrete things, which then fuel the ideas, etcetera. I suspect if mathematicians and astrophysicists took time to draw each week, they could eventually harness the visual centers of their brain in the service of science, perhaps creating new breakthroughs. 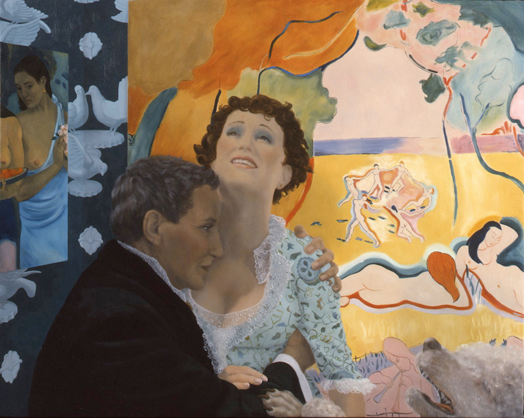 Q: You received an MFA at Yale. Why did you decide to become an artist instead of a scientist? How important was your training there for your art? Did it have a greater effect on your technique, or on your conception of what it meant to have a career as an artist?

HH: When I was 20, Frida Kahlo came to me in a dream and told me what to paint (her ideas weren't so bad). I hadn't been studying art at Berkeley, so I had to scramble to complete a major in art in time to graduate. A year later at Yale, I caught the very end of the old-guard faculty, such as William Bailey, and the recent Professors Emeriti Andrew Forge and Bernie Chaet were still hanging out. They broke us down and pulverized everything we thought we knew about art and our painting. We weren't nurtured, but we were given a basic tool kit: how to get paint to cleave to the canvas; the purpose, limits, and benefits of painting mediums; how to create the illusion of space. At Yale in the mid-nineties, there was no talk of career strategy, such as how to find a gallery, and as the faculty had tried to convince me I was daft, I moved to San Francisco to rebuild myself as an artist away from East Coast painting dogma.

Q: Which artists, past and present, do you admire most? Which have influenced you the most, and how?

HH: Modernism broke down painting to its fundamental physical components. However, I think the core of painting is story. When I was at Yale, the Osservanza Master and Sasseta opened the door to painting narratives in a simple and easy-to-understand fashion.

One contemporary painter I admire is Ellen Altfest . She can paint a fragment of a hairy leg so intensely that it has the power of a Gaudi building.

Q: How do you choose the subjects for your paintings?

HH: I read a lot and connect with other artists and look at art and mine for interesting cultural developments and probe whatever fascinates me. Then, I get frozen with artist's block until I shove it all and paint what was preoccupying me in the first place.

Q: You have written about doing historical research for your paintings. How do you use this information?

HH: It's important for me -- since I create paintings with a historical narrative -- to create scenes that are accurate and believable. For instance, if I paint a battleship, I will obtain the floor plans and ensure that everything -- even down to the trash compactors -- is painted in the correct place. In general I make an environment, then a scenario - I research it so I can believe in it. I sell the idea to myself. Only then do I unleash the characters into it to see what they do. 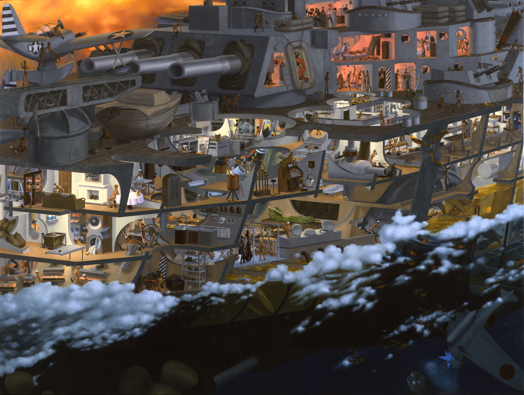 Q: Your paintings blend history and fantasy: you portray real people and events, but you don't present them literally. Characters in your paintings appear more glamorous than they actually were, and you make gruesome subjects elegant rather than grisly (e.g. the severed head of Ernest Hemingway). Do you want viewers to be shocked, amused, or something else?

HH: There's not a particular emotion or reaction I'm hoping viewers will have. In general, my goal is two-fold: to create a work of art that intrigues me enough to force its creation, and to grapple with larger issues -- which could range, depending on the painting, from capitalism to interpersonal power dynamics. Painting something either hyper-beautiful or decoratively gory is, in some ways, the same thing: they are both grotesque in that they are distortions.

Q: You often quote earlier art in your paintings -- specific paintings by Picasso, Matisse, and others, even a Damien Hirst sculpture. Why do you make these references?

HH: One of the intriguing aspects of art is that images can at times seem oppressive, like houseguests that won't leave. When I paint art into paintings, the depicted figures act as equal players to my figures in the unfolding drama. 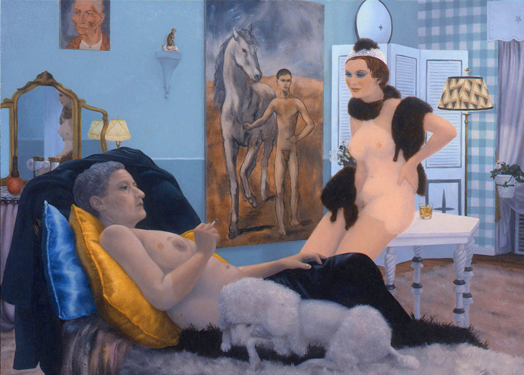 Q: You have written about making careful preparatory drawings for your paintings, but also that you sometimes have trouble finishing particular works. Do you normally make changes as you work? When you make changes, are they caused by changes in your ideas, or by the appearance of the work in progress?

HH: When color is added to a linear image, the visual weights of every element change so much that a good drawing can lead to a very difficult painting process. Maybe the successive layers of paint won't add up to anything. So when I despair, I travel to the actual place that inspired my painting and sit outside and paint from life. For instance, once I was painting and repainting a mining scene because the soil looked too fleshy. I flew to Gold Country and trekked to the site of a 19th century hydraulic mining and discovered that I needed to switch from using yellow ocher to yellow made from iron oxide.

When couldn't finish a painting of the South Pacific, I went to the beach in Kauai where the movie South Pacific was filmed and painted seven or so studies. Traveling can save a lot of time.

The benefit to slow painting is that the subconscious gets to work longer -- the details invented on the last day of painting are the best. 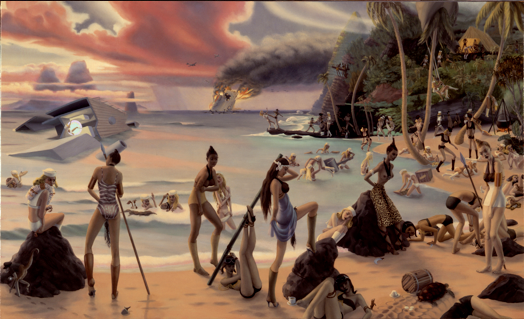 Q: You live part of the time in New York. How important is it for you to be there, and why?

HH: Nothing beats NYC for inspiration. The group is stronger than the sum of the individuals. The art museums are encyclopedias. The press are catalysts and gadflies. People care about art.

Outside the creative hothouse of NYC (and a few other cities), art is dead. It's not vital or a driving force in cultural anymore. When I go to interdisciplinary conferences, it's technology and social media that get people talking - the young entrepreneurs of Silicon Valley don't see any relevance to art and won't be trolling Chelsea for inspiration anytime soon. They don't buy art locally, either. In fact, early in my career I left San Francisco because I couldn't get a gallery there because the art scene was so small and petrified. There was no room for new ideas.

Q: How would you like your art to change in the next few years?

HH: My number one wish is to finish what I am working on! Two of my current ideas involve Charles Darwin and Peggy Guggenheim -- but I can't tell which of the ideas I'm dreaming up now will seem relevant in a year or two.