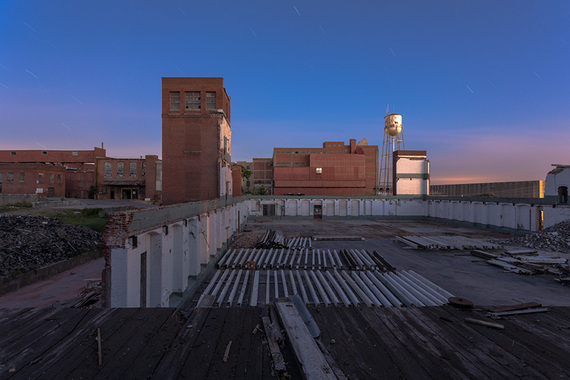 A few rays of sunlight still hit the Schoolfield Complex of Dan River Inc in 2012, as the century-old textile mill was being systematically torn down for salvage.

On December 8, 1993, incoming president Bill Clinton signed into law an inherited piece of legislation that would become one of the hallmarks of his presidency. Put together by the administrations of Mexico and Canada along with that of Clinton's predecessor, George H. W. Bush, the North American Free Trade Agreement would create a free-trade zone in North America, allowing commerce to proceed unhindered by any significant trade restriction.

At the time, opponents claimed that NAFTA would send American jobs south of the border; numerous trade unions and liberal organizations staunchly opposed the measure, and a majority of Democrats voted against it in Congress. Nevertheless, Clinton staunchly defended it, stating on 9/14/93: "NAFTA means jobs. American jobs, and good-paying American jobs. If I didn't believe that, I wouldn't support this agreement."

Certainly NAFTA created some jobs; however, a hindsight analysis from the Economic Policy Institute in 2011 points out that in the years since passage, nearly 700,000 jobs have been hemorrhaged by the agreement:

In 1994, Hillary Clinton was First Lady, and Bernie Sanders was a strange, loud, abrasive representative from Vermont, but they both had strong feelings about NAFTA, and they have had very different records on trade ever since. But let's make a pit stop before we fast-forward to the present day.

In the summer of 2012, I made several trips to photograph the Schoolfield Complex of Dan River Inc, a sprawling campus of textile mill buildings opened in 1904 to service the largest employer in Danville, Virginia. As someone who travels the country photographing historic abandoned structures, I couldn't pass on the opportunity to capture the last gasps of an enormous industrial site that had been in continuous operation for over a century. What I saw there was saddening. 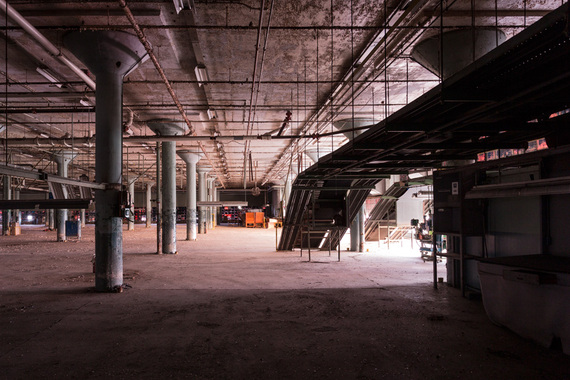 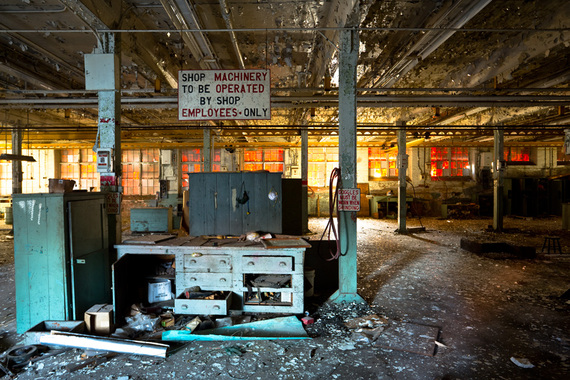 Roughly 50% of the complex had not been systematically stripped of anything of value, and then systematically dismantled for salvage, and was still standing. Some of the various buildings were fairly barren, but in many cases, one could round a corner and see places where, were it not for the peeling paint, cobwebs, and omnipresent dust, one would think that the workers were just about to punch back in.

On my second trip to the complex, I came across a floor in one of the mill buildings in which two flourescent lights were tentatively flickering above a break table; there were still butts in the ashtray, a crumpled soft-pack of generic brand cigarettes crumpled up on the bench: 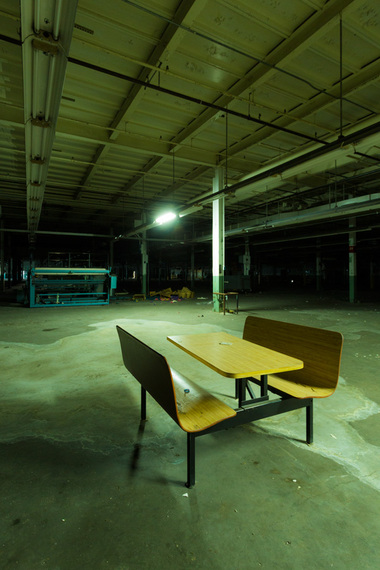 It was easy enough to imagine long hours at the various looms and sewing machines, or moving huge rolls of cloth across the floor with a forklift, and then stopping here for a smoke and a Coke. I wandered around this area, pondering how a business that had been re-listed on the NYSE at $15 per share in the mid-90s had been shuttered for good a mere decade later. A hundred feet from that table, I came across the most heartbreaking thing in the entire complex: 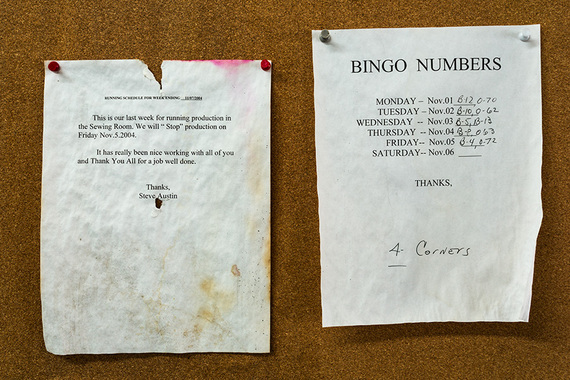 Right next to the week's "Bingo Numbers", with Saturday's entry conspicuously not filled in, was pinned a very simple note from the boss. 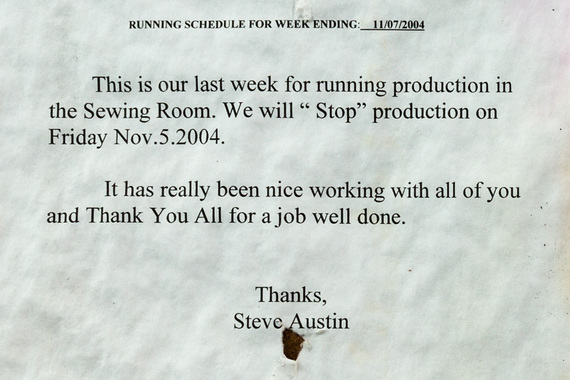 No elegiac words for the people there, just a brief thank-you and sign off. I remember wondering whether anybody won that Bingo game on November 5, 2004. I wondered what the prize was.

Now that it is 2016, it seems like it ought to be inconceivable that a Democratic president would have signed NAFTA into law just over 22 years ago. It ought to be, but it isn't. Hillary Clinton, speaking on February 26, 2008 in one of the Democratic debates, stated: "You know, I have been a critic of NAFTA from the very beginning." She wasn't, and she got slammed by the media for having been a major proponent of her husband's signature trade deal.

"I think everybody is in favor of free and fair trade. I think NAFTA is proving its worth" is not the statement of someone who was against the agreement from the beginning, but that's exactly what Clinton said - ironically, in comments to the Union of Needletrades, Industrial and Textile Employees.

Meanwhile, up-and-coming Representative Bernie Sanders (I-VT) made clear from the get-go that he truly did oppose NAFTA from the very beginning, pointing out that it would hemorrhage jobs to the benefit of nobody but the wealthy elite. In fact, Sanders went so far as to propose a side-bill that would do for Congresspeople what NAFTA would do for workers, by lowering the salaries of elected representatives to the levels of their Mexican counterparts. In a complete surprise to nobody, this was not adopted.

Clinton claims that she takes a hard look at free trade agreements and her votes will back that up, and she often trots out her vote against CAFTA as an example. What she fails to mention is that she voted in favor of almost every other trade agreement as Senator. Sanders, in contrast, has consistently voted against agreements that will export jobs from America to the benefit of corporate ownership.

By the end of 2000, the writing was on the wall for Dan River Inc. Esther Pearson who had worked at the complex for 46 years, working her way up from the sewing-room floor, was the last person out the gate on December 29, 2006:

"It was hard to deal with, to tell you the truth. We knew that our jobs would be gone... But who would know that God would keep me till the last one to leave the building."

Pearson remembered men coming in to move the last 600,000 yards of cloth to a warehouse. She punched herself out and they took away the computer.

Was the decline and fall of Dan River directly related to NAFTA? It seems as if the answer would have to be "yes and no". A flood of cheap textiles, some imported from Mexico, was a contributing factor. So was other foreign competition. It was an Indian company, Gujarat Heavy Chemicals Limited, that completed the final takeover once a long string of layoffs - many spurred on to competition encouraged by various free trade deals - had weakened the company to the point that it was de-listed from NYSE. For Esther, "Dan River started downhill when fabric came in from elsewhere." 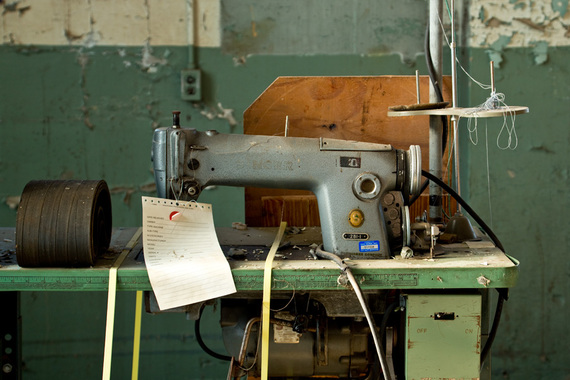 One of many sewing machines deemed not worth saving, and abandoned alongside the facility.

NAFTA has become emblematic of America's attitude towards trade in the Clinton and post-Clinton years. It certainly isn't the only factor in America's industrial decline - the great Homestead Steel Mills in Pittsburgh had fallen long before NAFTA, and Detroit's automobile prominence had long since come and gone. But it's hard not to see a connection between lax trade restrictions and the demise of the textile industry in Danville, Virginia, which welcomes visitors with an iconic 1948 sign: "Home of Dan River Fabrics". In a 2014 report by the Department of Housing and Urban Development:

With the fall of Dan River Mills, one third of the population in Danville became unemployed. Community Developers were now in charge of introducing new manufacturing and trades to employ the city's residents. Amid this huge loss of the Mills closing, homelessness became a new concern in the area. Because so many jobs were loss (sic), foreclosures began to rise.

Can another Clinton presidency possibly make this situation any better? For that matter, could a Sanders presidency do anything at this late date? It doesn't seem like there's a clear answer here, besides to point out that one of the candidates voted against the more recent TPP, while the other stated that the TPP "sets the gold standard in trade agreements to open free, transparent, fair trade, the kind of environment that has the rule of law and a level playing field. "

If I were a Danville resident deciding between the two, I think I'd have a fairly good idea who was in my corner. 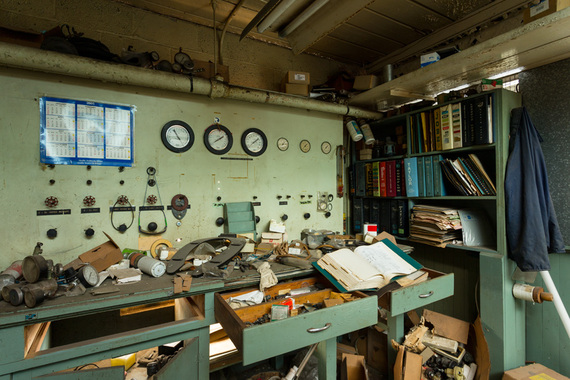 An office left just as it was the day the boss stepped out in 2005.