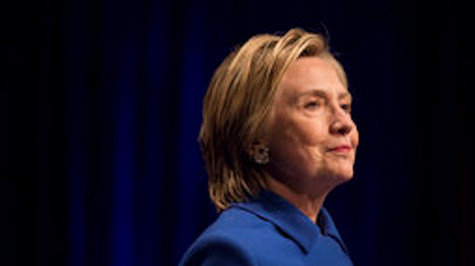 {UPDATE, 12.12.16. The new evidence of Russian intervention in the election with the express purpose of making Donald Trump the President of the United States changes the equation for a compromise solution to prevent Vladimir Putin's choice from taking control of the United States. There is now a greater chance that Hillary Clinton could emerge as the President as part of the compromise. See "Save America through a Compromise of 2016." Also please read and share "Where Is the Outrage? Where Are the Patriots?" on how Trump must be stopped,}

Hillary Clinton won the 2016 Presidential Election by a very decisive margin--more than 2.8 million votes. Because of the Electoral College she will not become President. But she could still emerge as a winner--indeed, a hero--by utilizing the Electoral College to save America and the world from the inestimable calamity of a Trump presidency.

Since a few days after Election Day, I have been pushing for the Electors to do what the Framers of the Constitution intended and save the Republic from the presidency falling into the hands of an incompetent demagogue who had been assisted by a hostile foreign power.

In two recent articles, "Hamilton v. Trump: The Case that Could Save America" and "538 People Can Save 325 Million," I called upon the Electors to choose as president a sane Republican who believes in facts and would not have such people as Lt. Gen. Michael T. Flynn and Stephen K. Bannon whispering in his ear. That could transform the looming catastrophe into a rebirth of America through a compromise that would create a National Unity Government.

The chances of such a plan succeeding, however, seemed slim. Even if 38 Republican Electors could be persuaded to vote for someone else, that would throw the decision into the House, where Republicans might elect Trump anyway.

But a proposal made by Michael Cannon in a Tuesday Washington Post op-ed offers a much more realistic way in which the Electors could provide a reprieve to a nation currently sitting on Death Row:

If Hillary Clinton releases all 232 delegates pledged to her and asks them to vote instead for a Republican who lives in the real, factual world, is not a misogynist and thin-skinned bully, does not associate with white nationalists, and has an attention span longer than 140 characters--perhaps John Kasich or Mitt Romney--provided that a minimum of 38 Republican Electors agree to vote for that same candidate, that person would become the President-elect on December 19 and the Republic would be saved from the likely disaster that a Trump presidency would bring.

But Democrats and Republicans need to go farther and negotiate, before the Electors meet, a Compromise of 2016 that will produce a National Unity Government, with all Democratic Electors and at least 38 Republican Electors also voting for a Democrat (Elizabeth Warren? Joe Biden?) for Vice President, an agreement by both not to run in 2020, a division of Cabinet posts between the parties, and agreement on certain key measures to restore trust in American government and politics.

Such a grand compromise would not only save America and the world from the untold disasters that a Trump Presidency would be highly likely to precipitate, but also deliver to the American people what most of them so desire: a Washington that works and an easing of the bitter partisan division that has marked the federal government since the 1990s.

Many Republicans are as terrified by a Trump Presidency as are most Democrats. Their fears grow by the day, as the Mad Tweeter continues to demonstrate his irrationality and immaturity and to surround himself with dangerous advisors. How many Republicans can be at all comfortable with the prospect of Gen. Flynn--a man who has spread many fake news stories and conspiracy theories, including a charge just before the election that Hillary Clinton was involved in "Sex Crimes w/Children," says of such fake news, "citizen journalism is the new future for truth," plays into the hands of Islamist radicals by saying the West is involved in "a world war" with Islam, and has close ties to Vladimir Putin--as National Security Advisor?

Given the general disarray of the Trump campaign during the primaries, it is likely that a good number of the people chosen as Republican Electors in states that he carried are not particularly loyal to him. One, Chris Suprun of Texas, declared on Monday that he will not vote for Trump. "I am here to elect a president, not a king," he said. He is leaning towards voting for Gov. Kasich. If Hillary Clinton and Democratic Electors get the ball rolling, it is likely that more Republicans who are fearful of what Trump might do can be brought into the compromise for the good of the nation.

It is a no-lose proposition for Democrats, because, as Mr. Cannon says, "If Democrats believe Trump poses a unique threat to the republic, and signal this is not okay by reaching across the aisle to marginalize and stop him, then win or lose, Democrats could legitimately claim they put partisanship aside for the good of the country."

This is an opportunity that must be seized immediately. Go for it, Mrs. Clinton and Democrats! There's not a moment to waste. This proposal can determine, in Lincoln's words, whether we shall "nobly save or meanly lose the last best hope of earth."

Such a selfless, patriotic act would be a crowning achievement for Secretary Clinton's career of public service.