As Bernie Sanders has surged ahead of Hillary Clinton in New Hampshire and moved into a virtual tie in Iowa, the Clinton campaign has pulled out what it believes to be its trump card (no pun intended): that the 74-year-old Sanders is unelectable. To many, the argument seems compelling; he is, after all, a professed socialist who for most of his career refused to run as a Democrat. But plausible as the electability argument seems, the question remains: is it true?

One widely used indicator of a candidate's prospects in a general election is "favorability" (i.e. the proportion of respondents who report "favorable" as opposed to "unfavorable" views of the candidate). In an average of different polls on this question compiled by Real Clear Politics, voters reported unfavorable views of Hillary Clinton by a margin of over 8 percent (42.8 favorable v. 51.0 percent unfavorable). Sanders, in contrast, had a very narrow positive rating (38.4 percent v. 38.2 percent). In general, social scientists believe that going into an election with over 50 percent "unfavorable" places the candidates in a precarious position. 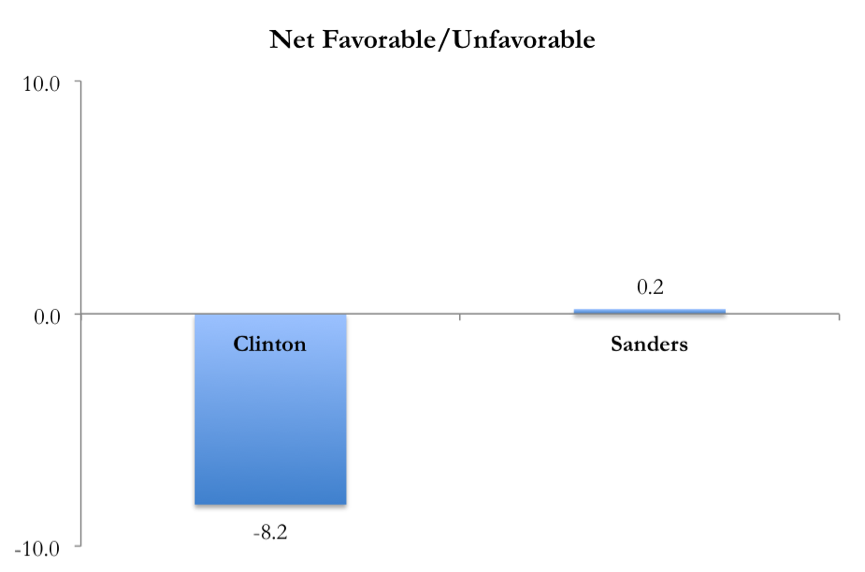 Beneath Secretary Clinton's problematic favorability ratings lies a deep reservoir of public mistrust. When prospective voters are asked whether or not she is "honest and trustworthy," their response is sobering; her rating on this dimension is a net negative 24 points, with 60 percent answering no and 36 percent answering yes. The contrast with Senator Sanders is striking in that it is precisely the opposite: a net positive of 24 percent, with 55 percent responding yes and 24 percent no. Though voters have in the past sometimes supported candidates not known for their honesty and trustworthiness (Richard Nixon comes to mind), a deficit on this quality is a not inconsiderable liability. 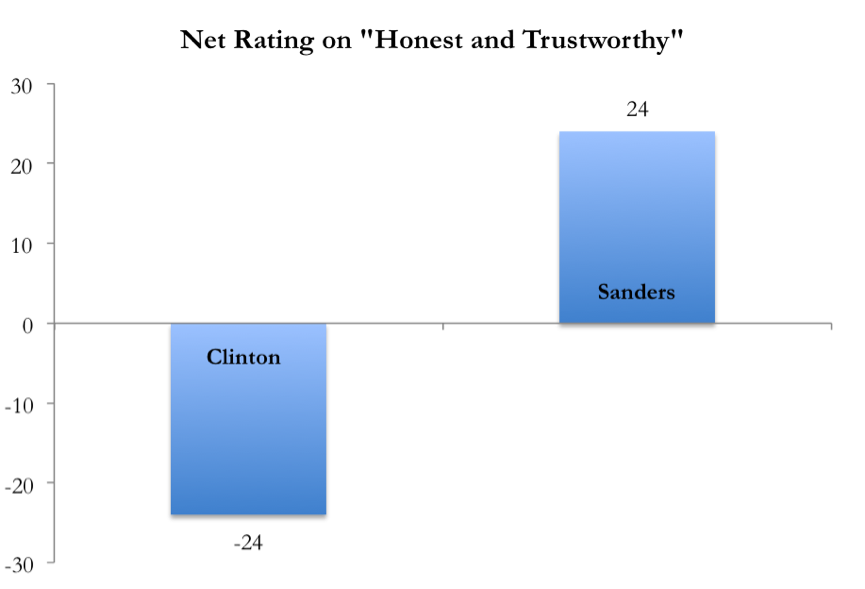 Another revealing question sometimes asked by pollsters--and one that traditionally favors Democrats -- is whether the candidate "cares about the needs and problems of people like you." Surprisingly, a narrow majority of respondents answered in the negative when asked about Secretary Clinton (51 to 45 percent). But Senator Sanders enjoyed a clear majority answering in the affirmative, 53 to 35 percent: a net positive of 18 percent, compared to a net negative of 6 percent for Secretary Clinton. For Democrats, whose comparative advantage resides in good part in the popular belief that they are more concerned about the needs and problems of ordinary people than the Republicans, this is a worrisome finding. 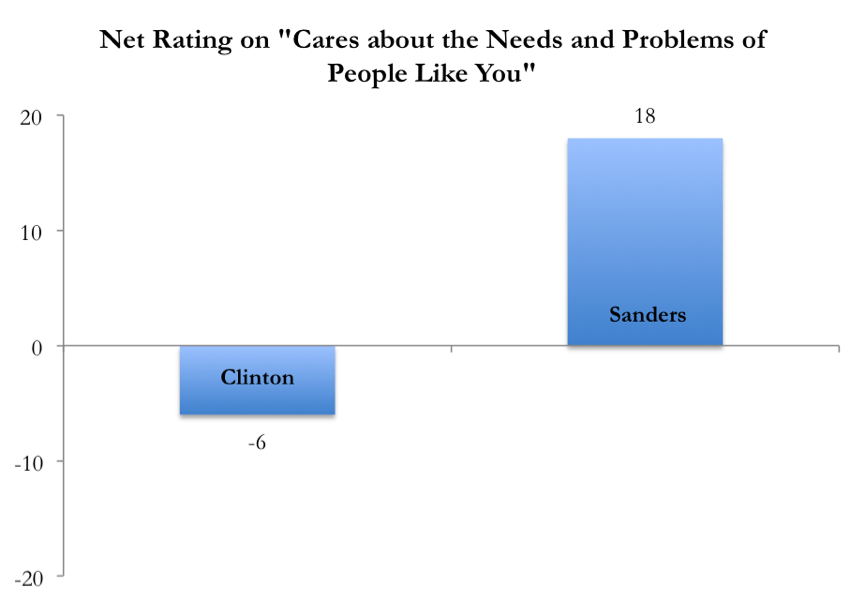 Among Independents, a small but still important group in the November election, Senator Clinton's weakness is particularly pronounced. Just 32 percent of Independents polled by Quinnipiac last month have favorable views of her, compared to 59 percent who have unfavorable views (net negative of 27); interestingly, Independents view Sanders much more positively, with 39 percent favorable and 29 percent unfavorable (net positive of 10). The depth of Senator Clinton's problems with Independents is revealed by their ratings of her in the same poll on several specific questions not asked about Senator Sanders (apparently because Clinton was the frontrunner at the time of the poll): "Honest and trustworthy" (23 v 72, net negative of 49), "Cares about the needs and problems of people like you" (36 v 59, net negative of 23), and "Shares your values" (31 v 64, net negative of 33). 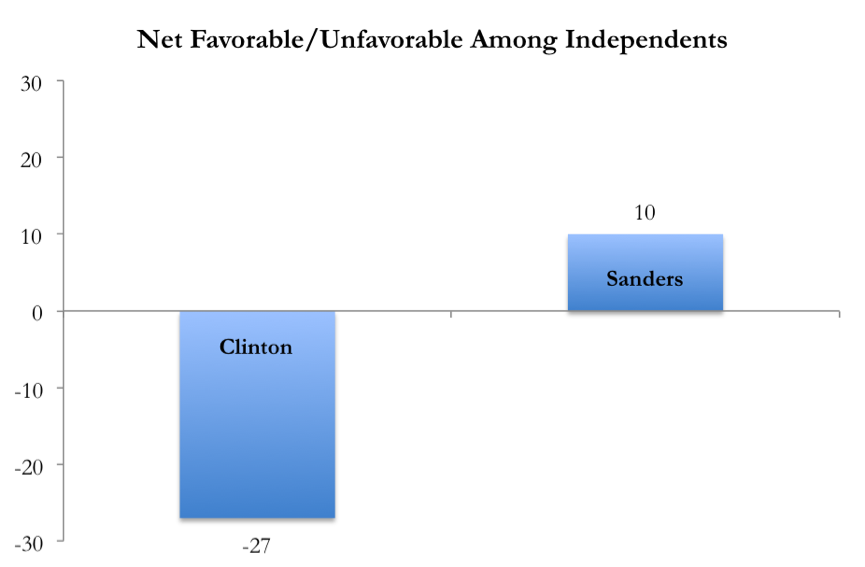 Cumulatively, these finding suggest that Hillary Clinton is more vulnerable as a presidential candidate than many of her supporters realize. Indeed, the most direct measure of electability -- albeit one that should be interpreted with extreme caution this far from the November election -- does not suggest that Sanders is less electable; on the contrary, he outperforms Clinton against the two leading Republican candidates, Donald Trump and Ted Cruz. Both Democrats beat Donald Trump, but Sanders' margin is 5.3 percent (46.8 to 41.5) compared to Clinton's margin of 2.5 percent (45.3 to 42.8). While Sanders beats Cruz by 45.0 to 41.7 percent, Clinton actually loses to Cruz 45.4 to 46.0 percent.

To be sure, Sanders also has significant vulnerabilities; describing yourself as a "socialist" calling for "revolution" who proposes to raise taxes on the middle class does not exactly seem the shortest route to the White House. It is guaranteed to provoke ferocious Republican attacks claiming that Sanders is far outside the political mainstream and is "un-American"; the only question is how effective these attacks will be.

For her part, Hillary Clinton has considerable strengths, among them her high ratings on competence, experience, knowledge, and strong leadership. At the same time, it is also true that Bernie Sanders exudes authenticity at a moment when the electorate craves it and generates the kind of passion and enthusiasm that is critical for the high turnout that Democrats need to win.

The simple truth of the matter is that no one knows who is more electable. The available evidence is contradictory and far too equivocal. Perhaps, then, primary voters should not make their choice on supposed electability, but rather select the candidate whose values, policies, and personal qualities embody the kind of person whom they would like to see in the White House for the next four years.