The first time I met Hillary Clinton, in the winter of 1999, she was holding a baking dish filled with something that looked like lasagna. Let's just call it a casserole.

She and her family were moving to their Dutch Colonial house in Chappaqua, and neighbors were giving a welcome to the neighborhood party -- a potluck dinner hosted in their honor.

The hostess said that Hillary had asked we be included. My husband and I were surprised by her thoughtfulness, and by her savvy in remembering that we lived there. And our connection to her was not the easiest.

My late husband Chaim Stern was the long-time rabbi at the reform temple in Chappaqua, New York. When the Lewinsky mess was at its worst, Bill Clinton gave two public apologies. The first was brusque. Then, at a prayer breakfast, he offered a more heartfelt apology, quoting from Gates of Repentance, the prayer book Chaim created for Rosh Hashana and Yom Kippur services.

(It was quite a moment for us. The media descended on our house. Networks called. The New York Times wrote a profile of Chaim. President Clinton sent us a copy of his speech and a gracious note. And that, I thought, was that.) But now the Clintons were moving a few minutes from our house, and here we were to greet them.

We were warned that the dinner was to be a relaxing event, not a political one, and to dress down and be neighborly. No reporters would be there, no Beltway bloviators, no politicos. Most of the few guests, in fact, were skeptical Chappaqua Republicans.

We arrived with a bowl of hot artichoke dip. The Clintons arrived with the "lasagna" and some hunky Secret Service guys. Chelsea, too. The first daughter was attending Stanford, and confided to a few of us how excited she was that finally she would have her own room -- in her own house.

The President, wearing a sky-blue sweater, worked the living room, dispensing charm and soaking up basic info like any newbie: "Where's the best deli? Where should I walk Buddy." (Poor Buddy was soon to be killed by a car on the road we suggested.)

We locals went along with this as naturally as possible, considering we were chatting with the most powerful man in the world. This event was decidedly, consciously informal; we all tried to relax, and after awhile we did.

Hillary, in a sweater and pants -- not a pants suit -- was shorter than I'd expected, and prettier. I wondered if she would be the calculating witch portrayed in much of the media, or the warm woman people who had met her already raved about. It was pretty clear within a few minutes: She laughed that big laugh, and looked straight at you and listened, asked questions about family, remembered names. Even the skeptical Republicans found her appealing.

Nobody wanted to be uncool and ask for a photo-op, but when one neighbor slyly brought out a camera and asked for a photo, the rest of our cameras came out, like mushrooms after a rainstorm. Chaim had tucked away a disposable, just in case, and I posed with the President, with his arm around me. And we smiled and stood there ... and stood there, for what seemed like a full minute, and for some reason Chaim couldn't get the little camera to work.

Finally President Clinton took his hand from my shoulder and said, "Rabbi, can I help you with that?" And he walked over to Chaim and moved the lever on the camera, walked back and put his arm right back where it had been.

While guests hovered around Bill, Hillary spent much of the time in a corner of the house, putting a puzzle together with the hosts' children. And that is how I most remember her. Smiling, with no one around but the kids. And I have to admit, I was more impressed with her right then than I was with the President of the United States.

Months later Hillary thoughtfully invited us to attend her announcement to run for the Senate, but we were traveling. I did meet her again at a political event after, and had a photo taken with her then. 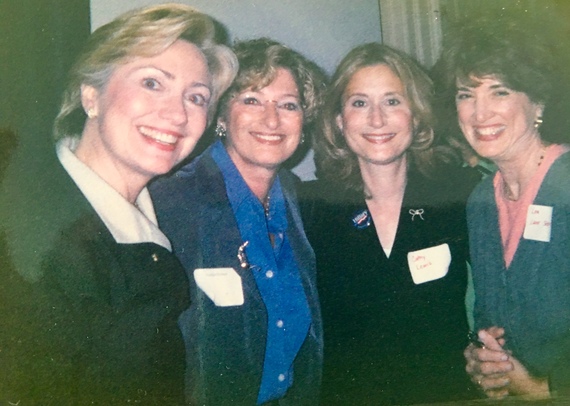 The next September, since the Clintons lived a few blocks away from the temple, Chaim invited them to High Holy Days services, and because they couldn't attend, Hillary wrote us a longhand personal note. She had plenty else to do, but again, she was kind and thoughtful.

And the next year, when Bill was retired to country squire and Hill was our New York senator, both Clintons did show up at services -- he in a skullcap, surprising the late-service congregants, and they stayed to schmooze.

Chaim died in 2001, after we had just moved to Miami. I readjusted my life, lost touch with most of the Chappaqua group, and nine years later, remarried. But as I now watch the pundits spew opinions about "the two least liked candidates for president" and hear folks continue to yammer on with Hillary Derangement Syndrome, I reflect on the dinner that snowy night with the Clintons, 17 years ago. I think about her playing with the kids, and her smile. And I especially remember the potluck casserole that Hillary supposedly prepared. And how it tasted.

And the one thing I'm most sure of: She'll be better at leading the country than she was at cooking.