On Sunday, Hillary Clinton was on a plane heading to Los Cabos, Mexico for the 2012 G20 Summit. After the plane landed, Clinton took a moment to compose herself, smile ... and flip her hair. When we saw this photo, all we could think was: Willow Smith. 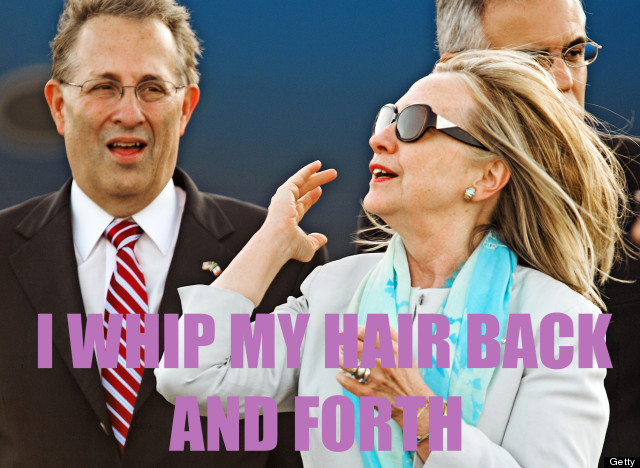 Hillz, a.k.a. Madam Secretary, has outdone herself this year in terms of taking awesome -- and meme-inducing -- photos. After an old photograph of Clinton texting in sunglasses went viral on Twitter in April, Stacey Lambe created an equally viral Tumblr account. "Texts From Hillary" spliced Hillary images with photographs of other famous individuals, including Obama, Biden and Meryl Streep.

Clinton also caused some controversy when she was photographed without makeup during a diplomatic trip to Bangladesh in May. Clinton eventually commented on the chatter, telling CNN:

You tell 'em, Hillz. In the spirit of her hair-flipping, sunglass-wearing badass persona, we've rounded up some great images of the Secretary of State for your viewing pleasure.

Hillary Clinton: 'We Have To Keep Pushing At That Glass Ceiling'