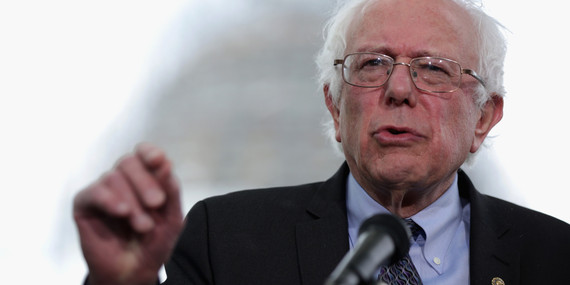 The new talking point among political wonks who never imagined Bernie Sanders possibly winning Iowa and New Hampshire, or seriously battling Clinton for the Democratic nomination, is a belief that Vermont's Senator only appeals to "white liberals." Therefore, let's forget for a moment that Killer Mike, Lil B The Based God, Dr. Cornell West, African-Americans for Bernie, Black Women 4 Bernie, Blacks for Bernie, Latinos for Bernie, and so many other Americans of all ethnic backgrounds are voting for Sanders in 2016. Let's also omit Clinton's 3 AM political ad against Obama in 2008 from the equation, or the fact that Harvard sociologist Orlando Patterson stated, "The ad could easily have removed its racist sub-message by including images of a black child, mother or father." Furthermore, before discussing Sanders's appeal to white liberals (noticed ominously by certain white liberals) or Hillary's charisma to everyone else, let's not mention the fact that Bill Clinton believes he made the issue of mass incarceration worse, or that Bill Clinton executed a mentally disabled black man named Ricky Ray Rector on his way to the presidency, or that the former president was forced in 2008 to say, "I am not a racist."

The issue pertaining to the latest concern about Sanders completely ignores that his policies, from a $15 minimum wage to reinstating Glass-Steagall and advocating a foreign policy that ends America's involvement in never-ending wars, will help all Americans, especially minority voters. In contrast, Clinton balked at a $15 minimum wage, doesn't back a renewed Glass-Steagall, and her foreign policy has been called "neocon" by a conservative historian. Ultimately, the belief that Sanders has any problem at all with minority voters is a flawed notion rooted more in Clinton's overwhelming name recognition at this point in the 2016 presidential race. The more that people learn about Sanders, and conversely the more that Democrats and progressives evaluate Hillary Clinton's positions on major issues like war and Wall Street (or at least the stances she's willing to articulate), the issue of polling among non-white voters within the Democratic party will begin to reflect a major shift towards Sanders.

One example of analysts focusing more on data pertaining to name recognition than actual policies can be found in a Real Clear Politics article titled Bernie Sanders Has A Super Tuesday Problem:

As other analysts have pointed out, the first two nominating contests - Iowa and New Hampshire - feel like home to Sanders. He hails from Vermont, one of the whitest and most liberal states in the country.

Vermont is his home state, and Massachusetts has a relatively high concentration of white liberals...

That being said, Clinton's advantage is big on Super Tuesday. More states favor her, and those states send more delegates to the Democratic National Convention.

Fourth, Sanders could theoretically increase the breadth of his appeal. If he somehow manages to broaden his appeal beyond white liberals, he might make a real run at the nomination.

First, the author makes a valid point about delegates, however ignores Clinton's 30,000 deleted emails that aren't really gone, and could easily lead to more questions about classified information being stored on unprotected networks. The latest memo from inspectors general for the State Department reads that Clinton's private account contained "hundreds of potentially classified emails."

One or two classified emails (stored on a private server) in the news about Iraq or Afghanistan could derail Clinton's campaign. Furthermore, many delegates and Democratic Party officials will jettison Clinton when Bernie Sanders wins Iowa and New Hampshire and the media becomes even more enamored with Vermont's Senator. Also, when grass roots Sanders organizations become even more involved in state politics after Iowa and New Hampshire wins, it's likely the Democratic establishment shifts towards Sanders. Clinton also had an advantage in delegates in 2008, but a longshot to win the presidency still won the fight for delegates.

As for the view that Sanders needs to somehow "broaden his appeal beyond white liberals," the assumption here is that Sanders doesn't appeal to non-white liberals. If this were true, then a Bloomberg article titled Bernie Sanders Finds Warm Welcome in Louisiana, A Red State, wouldn't quote the Vermont Senator speaking more honestly about race than any other candidate in 2016:

Near the end of his speech, Sanders turned to racial inequality to discuss Sandra Bland, a 28-year-old black woman who was found dead in a Texas jail this month after being arrested during a traffic stop.

"When an African-American woman gets yanked out of her car--" Sanders said, before being interrupted by nearly half a minute of loud cheers from the crowd at the mention of the Bland story. Last weekend, Sanders faced protests by Black Lives Matter activists who called on the senator to say Bland's name.

"When that happens, and when we all know that wouldn't have happened to a middle-class white woman, we know that we need some serious change in criminal justice in this country," he said.

Who in 2016 would say "we all know that wouldn't have happened to a middle-class white woman" or address the double standard that exists in American society in such a direct statement? In addition, certainly no other presidential candidate in America, Democrat or Republican in 2016, would echo Sander's belief that "we have to apologize for slavery."

The other side of Sanders's supposed issue with minority voters is the "white liberal problem" possessed by Hillary Clinton. In a brilliant Salon piece by Bill Curry titled The trap Hillary can't escape, the same liberals who once championed Hillary's rise to the presidency are now looking elsewhere for a true progressive:

Sanders is plainspoken about the radical environmental changes we must make to secure our prosperity and avoid an existential catastrophe. The transition to a sustainable economy based on conservation and clean, renewable energy is our most urgent economic task. Yet of the 5,113 words in Clinton's speech, exactly 60 were on energy and the environment. You can't run as a Democrat and name-check climate change. Clinton's a fine debater, but on this topic she's easy pickings...

In fact, it is no longer about trade. It is about whether democracy rules commerce-or commerce rules democracy. It's a subject Sanders knows well. Clinton appears clueless.

For the white liberals (and minority voters) who still care about war, unfair trade agreements, Keystone XL and other topics addressed boldly by Sanders, these Americans won't vote for a candidate who "appears clueless."

Finally, the same polls once used to undermine Bernie Sanders are now being used to bolster his campaign. A recent Gallup poll and article titled Sanders Surges, Clinton Sags in U.S. Favorability highlights the magnitude of what just a little more name recognition can do for Sanders in 2016:

PRINCETON, N.J. -- Vermont Sen. Bernie Sanders' favorable rating among Americans has doubled since Gallup's initial reading in March, rising to 24% from 12% as he has become better known. Hillary Clinton's rating has slipped to 43% from 48% in April. At the same time, Clinton's unfavorable rating increased to 46%, tilting her image negative and producing her worst net favorable score since December 2007...

Sanders is still an unknown to a majority of Americans, with just 44% able to rate him compared with Clinton's 89%.

Clinton's national image has taken a slight turn for the worse, which is also evident in her image among Democrats.

So, Sanders is "still an unknown to a majority of Americans." This explains his theoretical issue with minority voters, as well as what happens in the future when more people hear him speak about the economy, foreign policy, and the future of our nation.

The trust issues white liberals have with Clinton are the same trust issues minority voters will have with Clinton, once both Sanders and the former Secretary of State are viewed in a televised debate. After all, name recognition and increased media coverage will only help Bernie Sanders. Conversely, it's tough to represent the hopes of Americans hurt by entrenched political interests (this includes many white liberals, in addition to minority voters), when you've taken money from Donald Trump, or you've already run a campaign ad in 2008 that utilizes a "racist sub-message." For these reasons, Clinton's problem with white liberals, and Sanders's eventual appeal to minority voters, will enable Vermont's Senator to win the Democratic nomination.