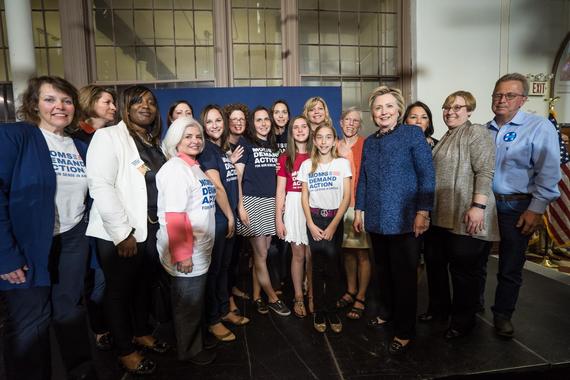 From volunteers with Moms Demand Action for Gun Sense in America, who have been a visible force at primary events, asking all candidates how they will address the gun violence crisis that kills 91 Americans a day, to the Mothers of the Movement, African-American moms on the campaign trail with Hillary Clinton, many of whose children were killed by gun violence.

Hillary has made mothers fighting for gun sense a key part of her policy platform.

And that's why, after months of asking tough questions and carefully considering the positions of all candidates, Moms Demand Action and Everytown for Gun Safety endorsed Hillary Clinton for president. We are the country's largest gun violence prevention group with more than three million supporters -- and we're with her.

In November, moms and women will elect Hillary Clinton as the first gun sense president. We will prove that gun safety is a winning issue because Americans, particularly women, demand it.

Volunteers with Moms Demand Action have already become a fixture in state legislatures, beating back bad gun bills and supporting gun safety legislation. Just this year, we helped defeat dozens of dangerous NRA-supported bills to allow guns in schools, guns on college campuses, and guns without permits. And in November, we will pass critical ballot initiative victories in Nevada, Maine and Washington state to help keep our families and communities safe from gun violence.

Why are mothers such a powerful political force? It's simple: women vote. There are 80 million mothers in America and women are the majority of the voting electorate. As such, we are putting politicians on notice:

We will use our voices and votes this year to change our country's culture of gun violence. We will not stand by while our children, families and communities are put in the line of fire by a greedy gun lobby.

Already moms and gun violence survivors have moved the needle on the issue of gun violence prevention in presidential politics, making it a top-tier issue instead of a political no-fly zone. And we did it in less than four years.

Even when an unrelenting gun lobby with extremist followers taunted and harassed us, we didn't give up. And we won't.

Lockdown drills should not be part of our children's school day. We should not fear the threat of gun violence at the movies or in the sanctity of our houses of worship. We shouldn't have to encounter the crossfire of bullets on our city streets or assault weapons in the aisles of our grocery stores.

As long as gun violence continues to threaten our children, our schools, our streets and our communities, moms will be at the voting booths every election, supporting only those candidates who stand up for our children so they don't have to stand up to gunmen.

And it's not just our children's best interests we have in mind when we go to the polls. Gun violence is a women's issue, full stop. It affects ALL women: married, single, with children--or not. Some 51 women are shot to death by a spouse or intimate partner each month. More women are killed each year by dating partners than by spouses, yet the "boyfriend loophole" in our current gun laws allow these abusers to remain armed.

It is for these reasons women and mothers with gun sense will be the force in making sure that gun violence prevention is the defining issue in this election.

We are the largest grassroots movement of Americans fighting for common-sense measures to end gun violence. We are non-partisan, but we are single-issue voters--and we are just as passionate about strengthening gun laws as the gun lobby's extreme leadership is about weakening them.