Much has been made in this election about Hillary Clinton's struggle to win over millennial voters. Indeed, some have speculated that Hillary Clinton could lose the election because millennials don't like her and their votes may prove decisive.

In a previous post, I used the results of a weekly tracking poll of the Latino electorate conducted by Latino Decisions, National Association of Latino Elected Officials Education Fund and Noticias Telemundo that found Latino voters to be more enthusiastic and partisan in 2016 than in the 2012 election. This week, I take a closer look at the data to analyze the attitudes of Latino millennials (18 to 39-year-olds) toward Hillary Clinton and the Democratic Party.

The focus on Latino millennials is imperative given that they are nearly half of Latino eligible voters and the fact that they provide insights into the future of this population's voting patterns. This analysis parallels the findings of a previous seven-state study on Latino millennials conducted by Latino Decisions and Americas Voice. The results of our weekly tracking poll reveal that Clinton is winning decisively among Latino millennial voters. Indeed, Latino millennials are skewing overall Latino support toward Clinton and the Democrats.

Latino voters were asked if they felt favorably (strongly or somewhat) or unfavorably (strongly or somewhat) toward Hillary Clinton, Donald Trump, Democrats in Congress, and Republicans in Congress. Figure 1 reports the favorability ratings for Clinton and the Democrats in Congress. Clearly younger Latinos rate Clinton more favorably than older Latinos (71 percent to 62 percent). The favorability gap is even higher for congressional Democrats (68 percent to 53 percent). Nonetheless, among millennials, Clinton's favorability rating are slightly higher than those congressional Democrats (71 percent to 68 percent). Clearly, Hillary Clinton and the Democratic Party are solidly supported by Latino millennials. On the other hand, among millennials and non-millennials Trump and congressional Republicans are faring poorly. 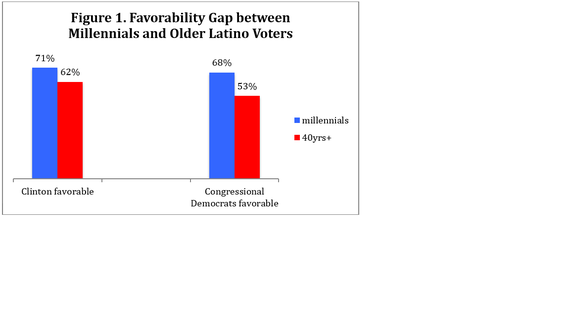 Feeling favorably toward the candidates and party is important, but voting for them is more critical. We asked Latino respondents to state who they planned to vote for on Election Day. We find that overall 72 percent of Latino voters say they will be voting for Hillary Clinton. However, when we divide the electorate into age cohorts, we find that millennials are more likely to state they will be voting for Clinton than older Latinos (77 percent to 67 percent), a 10-point gap (see Figure 2). When it comes to voting for congressional Democrats, the support gap widens to 11-points, with 75 percent of millennials saying they will be voting for the Democratic candidate compared to older Latinos who say they will do the same by 64 percent. Again, Latinos are broadly supportive of Clinton and congressional Democrats, but younger Latinos are especially supportive and that support drives up the favorability figures for Latinos overall. 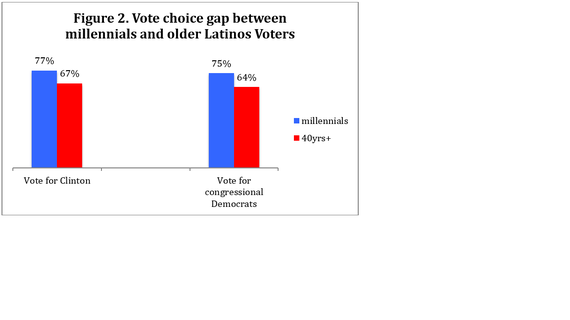 Is Latino support for Clinton and the Democratic Party merely the result of Donald Trump's attacks against immigrants and Hispanics? Certainly, factors including Trump's rhetoric have driven Latinos away from the Republican Party. But it is also important to consider what factors are drawing Latinos toward Clinton and the Democratic Party because doing so challenges the prevailing narrative that Clinton has failed to connect with younger voters.

Specifically, we asked respondents if they agreed or disagreed with the following statement: Hillary Clinton truly cares about the Hispanic/Latino community. Nearly, three quarters (74 percent) of Latinos agreed with that statement. Yet, it was younger Latinos that agreed with that statement at a higher rate (80 percent) than older Latinos (68 percent). Donald Trump may be driving Latinos away from the GOP, but we shouldn't underestimate Hillary Clinton's appeal to young Latino voters. 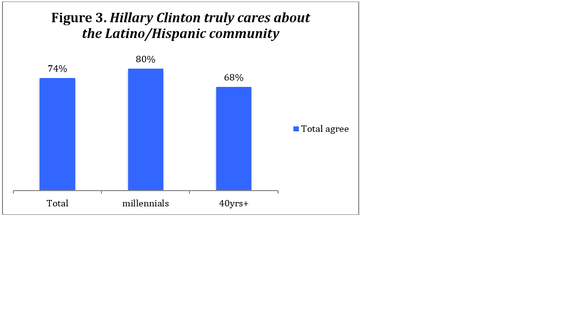 Millennial voters sustained Bernie Sanders' campaign during the 2016 primary election. After his defeat, pundits wondered whether Hillary Clinton could lure his young supporters to her campaign. Many news stories backed by piecemeal evidence suggest that millennials remain ambivalent about Hillary Clinton and the Democratic Party and are seriously considering casting their vote for a third party candidate. However, this narrative fails to recognize that young minority voters skew non-white; Latino millennials in particular constitute nearly half of the Latino electorate.

Using national tracking poll data, my analysis shows that Latino millennials are strongly backing Hillary Clinton and the Democrats. The Latino electorate is diverse and different segments exhibit varying levels of support for the candidates and political parties. Yes, younger Latinos are reacting more negatively to Donald Trump's rhetoric, but they also reacting more positively to Hillary Clinton's campaign. Latino voters broadly, and millennials in particular, are hardly ambivalent about their electoral choices in 2016.