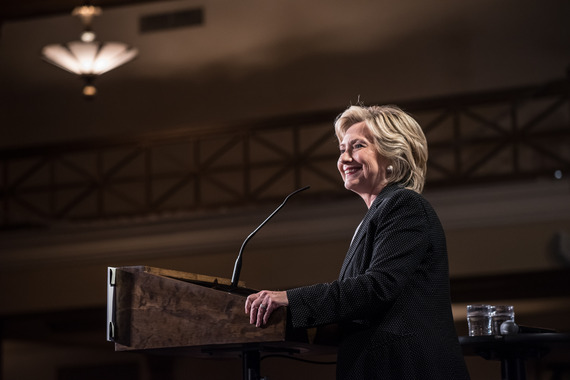 The polling is interesting right now and comes during a national quest for authenticity. Bernie Sanders is up in the polls in Iowa and New Hampshire but as you get further into the primary season he's got a lot to do. In New Hampshire Hillary Clinton is down 38 points with Democratic men; while Sanders trails Clinton among African Americans by 48 points in North Carolina, according to YouGov/CBS News 2016 Battleground Tracker.

[Hillary Clinton's] support in the primary has tanked in particular among women, previously a mainstay of her candidacy, from 71 percent in July to 42 percent now. [ABC News]

What's really interesting is that Democrats don't really care about the server/email saga, whether they support Clinton or Sanders. One reason why they shouldn't. When it comes to voter enthusiasm for a candidate, Sanders bests Clinton 78% to 39%. Something else is clearly going on between Clinton and her audience beyond the email issue.

On experience Clinton still trounces her opponents, but Clinton and Trump are essentially tied among general election registered voters 46-43. This shouldn't surprise anyone because the country is divided fairly evenly.

I've got one theory why Clinton's cratered with women. Many women look at Clinton from the vantage point of someone competent, experienced and ready to be president. It's why they've supported her. But having their own careers or job they look at Clinton's responses the last 6 months to the server/email story and though the vast majority of Democrats don't care about it, they do care about Clinton's performances the last 6 months. They know if they were in a similar position they couldn't get away with the behavior and answers she has given, expecting more from her than the dissembling statements and performance that comes off sketchy. Clinton has been a champion for women's rights, but a lot of women carry the cause themselves, too, and they don't just want to vote for a woman for the sake of it. They want her worthy and over the last 6 months she's let women down by becoming her own worst enemy, being disrespectful of people in the press who have a job to do, and made self-inflicted errors that are embarrassing. Women want Clinton to be better than she is and they're disappointed.

This why Joe Biden's interview with Stephen Colbert has evolved into a watershed moment on the Democratic side. No other statement draws it better than Van Jones on CNN's "State of the Union" Sunday morning.

"Look, I mean, something happened [for] the Democratic base this week with Joe Biden, because of that interview. I mean, I've heard from people all across the country that that is the kind of authenticity that we need. This is not a politics primary. It's not a policy primary. This has become a personality primary and it's about authenticity and there's nobody more authentic than Joe Biden. I think he accidentally drew a sharp contrast with Hillary Clinton, who I love. But Hillary Clinton has had a tough road in public life. She's become more armored because of it. He's had a tough road in his personal life and he's become more human. And I think the pressure for him to get in now is greater than it's ever been." - Van Jones

It's like something in the cosmos aligned. ...for Joe Biden.

The American public is currently cynical, infuriated and distrusting of public figures who've been in Washington forever.

Segue to John Heilemann's reporting that includes Joe Biden talking to one of the most powerful Obama bundlers, a man who has given to Clinton, but isn't bundling for her yet.

But what those close to Biden and others who have spoken to him in recent days also say is this: that he believes, after two miserably failed bids for the White House, 2016 may finally be his time; that he is convinced he is suited, perhaps uniquely, to a moment when authenticity is more prized than ever in our politics, so prized that someone as unlikely as Donald Trump could have become the overwhelming Republican front-runner based to a large extent on the perception that he "tells it like it is"; that he not only sees the Clinton campaign as performing poorly, but believes he possesses something that the fading front-runner does not--a clear and coherent understanding of why he wants to be president, and the ability to express it in a way that voters would find ... real.

There's been a lot of talk about authenticity. It's a cousin to truth and a more precious commodity than chocolate. One way a person reveals her or his authenticity to people is to say something that is true that's not to your benefit. A script can't capture it and people recognize it immediately, because it can't be faked.

I wouldn't presume to give Team Clinton advice on how to run a national presidential primary campaign. I'd rethink telegraphing a spontaneity campaign to a major newspaper, but that's just me. Sorry for the snark, but that was the final straw for me towards a candidate and campaign that clearly is overestimating the reserve of patience some of us have for watching someone as important as Hillary Clinton squander her advantage and expect us to just sit back and applaud like trained seals.

As a seasoned performer that knows the value of image and the power of the camera, I can tell Team Clinton and their candidate that the only way to change the current mood towards Mrs. Clinton is to throw away the script and walk out and face people cold. She either knows what she wants to say or she doesn't. Quit talking to the press with one-liners that are embarrassing. Stop making statements, like "sorry about that," that the candidate clearly doesn't believe, proved by the fact that 24-hours earlier Clinton said she wouldn't apologize. And stop being afraid to tell it like it is, whether it's the private server, because you wanted to control who saw what, or Bernie Sanders. It's been counterproductive and shown disrespect to a man who's besting everyone else in the first two states towards the nomination. I don't care that Team Clinton and the candidate believe the southern firewall will douse Sanders' enthusiasm. If Joe Biden can give Sanders his due so can you.

Hillary is the scripted candidate in an improv atmosphere. This time around she's also different. It's 7 years since her wondrous fighting Hillary finish and a lot has happened. Van Jones is correct, she appears "more armored." And like the American people she seems less trusting of her audience, too. In 2008 we saw flashes of exactly what Hillary was thinking. This season she's been programmed to extreme and no one wants to watch that for 4 years.

That's one reason Joe Biden is a risky prospect for her. For the first time in his political career the winds might be blowing in his favor. Heilemann's reporting is dead right. Telling it like it is happens to be in and he can do it with gravitas. He has no inhibitions and nothing to lose, because he's lost so much. But these windows don't stay open long and the current timing, according to Heilemann, Biden waiting until November, gives Clinton a long time to figure out how to rectify the damage she's done this year.

It's a mistake for Vice President Biden to wait until November to decide, but it's the only good news Clinton's gotten since the Biden buzz began.

It's still HRC's to lose, despite new polls. But it's hard to inspire w/grinding, tactical race. "Hillary: Live With It" is no rallying cry!

Taylor Marsh is an author, political writer, and relationship expert. Marsh writes regularly on Hillary Clinton, and was profiled in the Washington Post and New Republic for her coverage during the 2008 campaign.

Photo by by Barbara Kinney for Hillary for America, via Flickr