Has anything Hillary Clinton done lately not gone viral?

Secretary Clinton's first Internet renaissance came when the now-defunct "Texts from Hillary" Tumblr circled furiously around the web, culminating in the secretary herself participating in the site.

And now, a pic of Clinton without makeup -- and wearing glasses -- has set off another dose of Internet fervor.

Drudge Report and other websites posted a picture of Secretary Clinton "au naturel" on Monday, showing Clinton speaking in Bangladesh wearing black frame glasses and what seems to be no makeup (except for some little lip gloss in some of the photos). The Washington Post remarked that in the "refreshing" photo, Clinton "looked like a schoolgirl." (Fox News, on the other hand, says the secretary looks "tired and withdrawn" in the images.)

Hillary's been riding an image crest lately after that famous photo emerged of the secretary checking her Blackberry while wearing sunglasses. Since then, she's also been spotted partying in Colombia, wearing a chic dress in Europe and hanging out with Tyra Banks.

Just another reason why some fashion mavens love Hillary (and why we are firmly anti-scrunchie ban.)

See one of the alleged "no makeup" pics and more photos of Hillary's glasses moments from her recent travels in India and Bangladesh below. 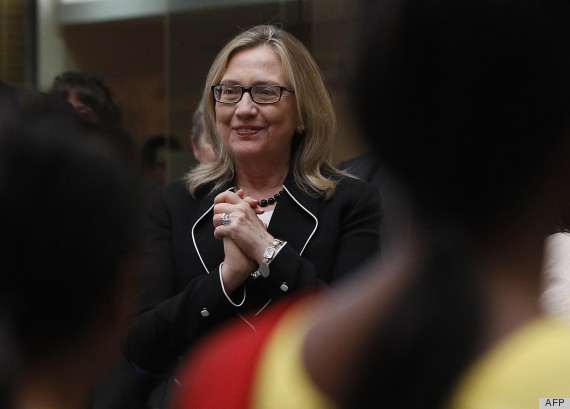