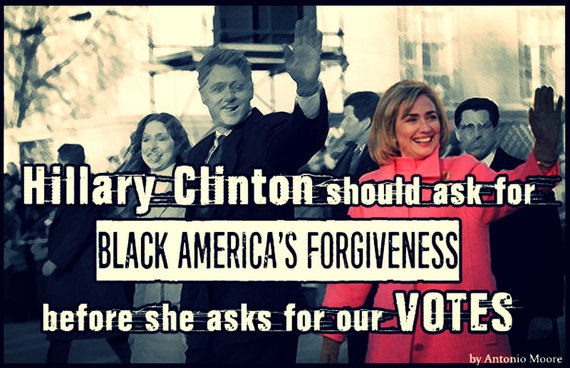 Houston, we have a problem. Hillary Clinton's campaign has run into a major speed bump and it's called Bernie Sanders. As we move toward the day of reckoning known as Super Tuesday, she's dialing up Black America to answer the call to action.

The woman that was supposedly married to America's first black president is now hoping that it is Black America that buoys her campaign. The problem is that regardless of whether Bill Clinton believes, as he has recently stated, that"we are all mixed-race people...", he is white and the Clintons were far from good for Black America in their last go around in the White House.

Whether we look at "The Violent Crime Control and Law Enforcement Act " signed by President Clinton in 1994, a piece of legislation which led to more black men being incarcerated than we had seen in all of America's dark history, which is saying a lot. Or, the Telecommunications Act of 1996 which nearly gutted black media ownership by removing caps on corporate media ownership. The Clinton era was marked by a reality of setbacks for African Americans that are too often understated, and are best summed up by Michelle Alexander, author of the bestseller "The New Jim Crow".

"If anyone doubts that the mainstream media fails to tell the truth about our political system (and its true winners and losers), the spectacle of large majorities of black folks supporting Hillary Clinton in the primary races ought to be proof enough. I can't believe Hillary would be coasting into the primaries with her current margin of black support if most people knew how much damage the Clintons have done -- the millions of families that were destroyed the last time they were in the White House thanks to their boastful embrace of the mass incarceration machine and their total capitulation to the right-wing narrative on race, crime, welfare and taxes. There's so much more to say on this topic and it's a shame that more people aren't saying it. I think it's time we have that conversation." Michelle Alexander

Under former President Bill Clinton's administration the number of incarcerated rose dramatically, the increase primarily being composed of young black males. According to the Los Angeles Times, "During Clinton's eight-year tenure, the total population of federal and state prisons combined rose by 673,000 inmates--235,000 more than during Reagan's two terms." As I wrote in one of the more popular pieces on incarceration, The Black Male Incarceration Problem Is Real and It's Catastrophic,

"... there are currently more African American men incarcerated in the U.S. than the total prison populations in India, Argentina, Canada, Lebanon, Japan, Germany, Finland, Israel and England combined. India alone is a country of 1.2 Billion people, the country in total only has around 380,000 prisoners." 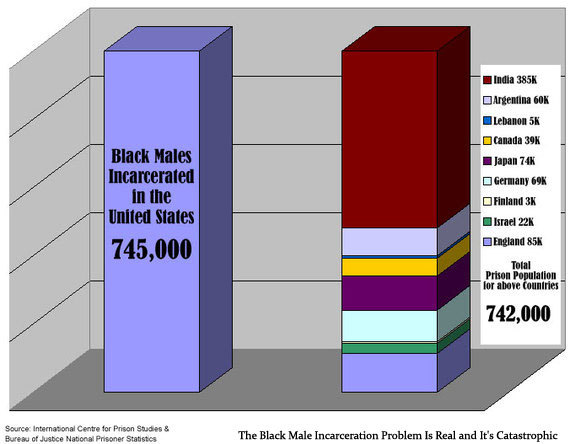 Recently Bill Clinton admitted regret for his part in the incarceration increase stating, "... the president spoke a long time and very well on criminal justice reform,..But I want to say a few words about it. Because I signed a bill that made the problem worse and I want to admit it." But his words do little to correct the effects his legislative pen had on millions of black families. This is covered extensively in the documentary I served as a producer on "Freeway: Crack In The System", which details how lawmakers racialized the punishment of non-violent crimes, and the devastating impact that approach had on black homes across the nation. The increase in gangs and drugs that we covered in our film, resulted in Hillary Clinton calling those convicted 'super-predators', and stating they needed to be brought to heel. An action often reserved for breaking an animal, rather than rehabilitating human beings.

" They are not just gangs of kids anymore. They are often the kinds of kids that are called 'super-predators.' No conscience, no empathy. We can talk about why they ended up that way, but first we have to bring them to heel..." Hillary Clinton 1996

The problem was they were not super, nor predators, they were just a generation of misguided young black men. In actuality they were brothers, fathers and sons caught in a webbing of economics that was 30 years in the making, one that dated back to a time when President Nixon formally declared a "war on drugs". This entanglement closed in on them as cheap drugs became available, and cities across the nation lost manufacturing jobs leaving employment deserts in urban ghettos.

Following her earlier statement, Michelle Alexander wrote a scathing critique, being highly critical of Hillary Clinton receiving support from Black America. In it she details the reasons why Hillary should not get Black America's vote, and calls on African Americans to take on a deeper review of the Clintons' policy history.

Bill Clinton was the standard-bearer for the New Democrats, a group that firmly believed the only way to win back the millions of white voters in the South who had defected to the Republican Party was to adopt the right-wing narrative that black communities ought to be disciplined with harsh punishment rather than coddled with welfare... Clinton mastered the art of sending mixed cultural messages, appealing to African Americans by belting out "Lift Every Voice and Sing" in black churches, while at the same time signaling to poor and working-class whites that he was willing to be tougher on black communities than Republicans had been... An oft-repeated myth about the Clinton administration is that although it was overly tough on crime back in the 1990s, at least its policies were good for the economy and for black unemployment rates.

The truth is more troubling. As unemployment rates sank to historically low levels for white Americans in the 1990s, the jobless rate among black men in their 20s who didn't have a college degree rose to its highest level ever. This increase in joblessness was propelled by the skyrocketing incarceration rate." Why Hillary Clinton doesn't deserve the Black Vote" - The Nation

Hillary Clinton's backing from blacks should not be a given, it should be a question mark given the very questionable past the Clintons have with Black America. As stated by Shaun King of the #BlackLivesMatter movement, "The idea of an African-American firewall for Hillary Clinton is deeply insulting." For those that conveniently try to separate Bill Clinton's time in the oval office from Hillary, no matter how you slice it Hillary Clinton's campaign is indelibly intertwined with Bill's administration. It is undeniable her record of preparedness for the White House is based in large part on his presidency.

Focusing in on the economy, the Clinton era is remembered as a great time for America, a time when everyone prospered. But so often what is forgotten is a detail of how at least in part all those supposed good times occurred. The prosperity everyone remembers was short lived, and it lacked sound fundamentals to sustain itself. As an example, in 1999 President Bill Clinton signed the Financial Services Modernization Act, effectively repealing Glass Steagall the law that separated commercial banks and investment banks. Many economist credit Bill Clinton signing this legislation with the creation of the sub-prime mortgage crisis. A financial catastrophe, which particularly ended up targeting so many Latino and African American families across the nation.

Incarceration was yet another instrument used to skew economic numbers. Under the administrations of Reagan and Clinton, incarceration a social tool used for punishment also became a major job creator. According to a PrisonPolicy.org piece written in 2002,

During the last two decades, the large-scale use of incarceration to solve social problems has combined with the fall-out of globalization to produce an ominous trend: prisons have become a "growth industry" in rural America. Communities suffering from declines in farming, mining, timber-work and manufacturing are now begging for prisons to be built in their backyards. The economic restructuring that began in the troubled decade of the 1980s has had dramatic social and economic consequences for rural communities and small towns. Together the farm crises, factory closings, corporate downsizing, shift to service sector employment and the substitution of major regional and national chains for local, main-street businesses have triggered profound change in these areas. The acquisition of prisons as a conscious economic development strategy for depressed rural communities and small towns in the United States has become widespread. Hundreds of small rural towns and several whole regions have become dependent on an industry which itself is dependent on the continuation of crime-producing conditions.

The incarceration of young blacks is part of the reason the unemployment numbers fell under the Clintons. Effectively by incarcerating young black men they became an invisible population and no longer counted as unemployed, despite still being jobless behind bars. In addition, through their imprisonment jobs were created for officers, judges, prison guards and the like, in communities across the country.

While Hillary's recent speech in New York on Black America's social issues is respected, I have reviewed her plan and it falls short on specifics and timelines. At a time when the black and white wealth gap has reached astronomical levels, African Americans need more than a message in exchange for their votes in 2016. They need a commitment with performance benchmarks, and a plan focused on them and the effects of their legacy of disenfranchisement in America. Her speech lacked the recognition that would come alongside an apology, whereby it would be clear she has a better grasp these actions she is proposing are corrective in nature. In one of the more tepid moments of the same speech she stated,

"I've made mistakes, I've walked my own journey... we also learned about what doesn't work, some of what we tried didn't resolve problems. Some ended up creating new ones. And that caused disappointment, frustration, even anger." Hillary Clinton 2016

It is not enough to say Black America faces problems; the Clintons must go further and take responsibility for playing a role in planting part of those problems' roots. The great irony of her speech came when she referenced second chances for convicts stating, "... in my faith we believe in second chances, in America we believe in second chances. Let's give those chances to people who need them the most." If we take full stock of the lasting effects that resulted from the legislative policies enacted by the Clintons, we are ultimately lead to the question, why should we give you a second chance in the White House?

As the Congressional Black Caucus places their backing behind Clinton, Black America should take this moment to demand more for their support. The question African Americans should ask Hillary Clinton, is what will you commit to doing in the first one hundred days that addresses our needs? Demand a real reform of criminal justice with benchmarks, demand America apologize for the institution of slavery and it be coupled with a review of the United Nation's recommendation of implementation of some form of reparatory justice, demand more avenues for black owned business to grow with improved access to commercial loans from banks. In the end Black America should come with a succinct ask, and also demand that Hillary Clinton apologize to get the black vote. Follow the discussion @Tonetalks

--------------
Antonio Moore is a Los Angeles Attorney. He is also one of the producers of the documentary on the Iran Contra, Crack Cocaine Epidemic and the resulting issues of Mass Incarceration "Freeway: Crack in the System". Mr. Moore has contributed pieces to Huffington Post, Inequality.org and thegrio on topics of race, mass incarceration, and economics.