"Fox & Friends" hosts shared a clip Thursday morning from a speech presidential candidate Hillary Clinton made during a campaign stop in South Carolina this week.

But the Fox News hosts concentrated on the fact that they thought it sounded like Clinton was putting on a Southern accent for the crowd.

"Is that a Southern accent?" co-host Brian Kilmeade asked.

Republican candidate Carly Fiorina showed up at Clinton's event. The Fox hosts praised her for standing outside to take questions from the press but were dismissive toward Clinton, saying she was inside talking about her hair color -- and, of course, faking an accent. The hosts made no mention of Clinton's remarks about pay equality or women's rights.

Soon, a segment about Clinton's speech turned into a full-on investigation into the candidate's so-called inauthentic accent, including a montage of clips the hosts said showed her adopting a faux Southern drawl.

The chyron at the bottom of the screen read: "Y'ALL GONNA VOTE FOR ME? ONCE AGAIN, CLINTON FAKES SOUTHERN ACCENT." 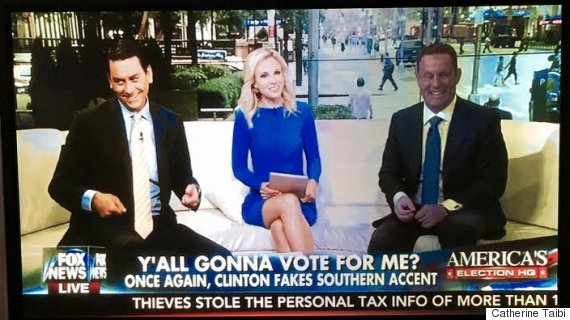 "If I'm Southern, I would be a little insulted if somebody I knew from the Northeast is putting on a bad Southern accent," Kilmeade said.