By Erika Solomon and David Brunnstrom

BEIRUT/BRUSSELS, Dec 5 (Reuters) - Washington fears a "desperate" Syrian President Bashar al-Assad could use chemical weapons as rebels bear down on Damascus, Secretary of State Hillary Clinton said on Wednesday, repeating a vow to take swift action if he does.

Rebels fighting to overthrow Assad said they had surrounded an air base near Damascus, a fresh sign the battle is closing in on the Syrian capital, a day after NATO agreed to send air defence missiles to Turkey.

The Western military alliance's decision to send U.S., German and Dutch Patriot missile batteries to help defend the Turkish border would bring European and U.S. troops to Syria's frontier for the first time in the 20-month-old civil war.

Heavier fighting erupted around Damascus a week ago, bringing a war that had previously been fought mainly in the provinces to the centre of Assad's power. Fighters said on Wednesday they had surrounded the Aqraba air base, about 4 km (2.5 miles) outside the capital.

"We still do not control the air base but the fighters are choking it off. We hope within the coming hours we can take it," said Abu Nidal, a spokesman for a rebel force called the Habib al-Mustafa brigade.

He said rebels had captured a unit of air defence soldiers, killing and imprisoning dozens while others escaped.

Syria's state news agency said the army was still firmly in control of the base, but did not comment on rebel claims that they were surrounding the area.

Accounts like this from Syria are impossible to verify, as the government has restricted media access to the country.

For several days, Western officials have repeatedly focussed on what they say is a threat that Assad could use poison gas.

After meeting other NATO foreign ministers in Brussels, Clinton said: "Our concerns are that an increasingly desperate Assad regime might turn to chemical weapons, or might lose control of them to one of the many groups that are now operating within Syria.

"We have sent an unmistakable message that this would cross a red line and those responsible would be held to account," she added.

U.S. officials have said this week they have intelligence that Syria may be making preparations to use chemical arms.

Syria, which has not signed the international chemical weapons treaty banning the use of poison gas, says it would never use such weapons on its own people. Those comments were reiterated by Deputy Foreign Minister Faisal Maqdad in a television interview with Sky News.

Maqdad made the first appearance by a government official for over a week, since fighting around the capital intensified.

He laughed off media reports that he had passed on a letter from Assad exploring the possibility of asylum during his recent trip to Venezuela, Cuba, Ecuador and Nicaragua.

"This is funny, this is laughable," he said. "I assure you 100 percent that President Assad will never ever leave his country."

But the rebels have been making advances across the country in recent weeks, despite punishing air raids, and have stepped up fighting outside Damascus. Wednesday saw fighting in a semi-circle of suburbs on the capital's eastern outskirts.

"The shelling is so loud, it feels like every other minute there is an air raid or an artillery shell hitting. We were woken up early by the sounds of the shelling in the eastern suburbs today," Ayman, who lives near the suburb of Jaramana, said by Skype.

Most of the areas being shelled are pro-opposition, apart from Jaramana, seen as a pro-government or neutral area, where town elders have refused rebel requests to pass through.

A rebel unit said fighters had attacked a checkpoint on the outskirts of Jaramana. Heavy fighting was also reported in the suburbs of Saqba, Irbeen, and Zamalka, according to the pro-opposition Syrian Observatory for Human Rights.

The army's strategy has been to divide Damascus, Assad's seat of power, from the countryside where rebels are increasingly dominant. Air raids and artillery have pounded rebel-held suburbs near the city for more than a week, in what activists call the worst shelling yet in the area.

A Syrian government source said the army had pushed rebels back 9 km (5 miles) from the capital.

UN Secretary General Ban Ki-moon urged the government, the opposition and their foreign allies to end the bloodshed, which he said had killed more than 40,000 people.

"I am urging again that the parties immediately stop the violence and those countries who may have influence on both parties should be exerting their utmost efforts to influence them to stop," he said at a news conference in Kuwait.

"And those countries that may be providing military equipment and other assistance should stop."

NATO's decision to send air defence missiles to the Turkish frontier is a first military step into the region by an alliance that has so far refused to repeat the kind of armed intervention that helped toppled Libya's Muammar Gaddafi last year.

NATO says the Patriot missiles are purely defensive. Syria and allies Russia and Iran say the move increases regional instability and could set the stage to impose a no-fly zone.

Turkey, a NATO member hostile to Assad and hosting thousands of refugees, says it needs the air defence batteries to shoot down any missiles that might be fired across its border. The German, Dutch and U.S. batteries would take weeks to deploy.

"What it does do, of course, is send a very powerful signal," Lieutenant General Frederick Hodges, commander of NATO's new land command headquarters in the Turkish city of Izmir, told Reuters.

A Turkish foreign ministry official said: "The Patriots were requested to create a counter-measure to every possible kind of threat, first and foremost short-range ballistic missiles, because we know they have them."

Cengiz Candar, a veteran commentator at Turkey's Radikal newspaper who travelled with Foreign Minister Ahmet Davutoglu to Brussels this week, said the government was worried about some of Syria's 500 missiles falling into the wrong hands.

"The minister and his team were of the view that Syria was not expected to use them against Turkey, but that there was a risk of these weapons falling into the hands of 'uncontrolled forces' when the regime collapses," Candar wrote on Wednesday.

Fighting continued for a seventh day near the highway leading to Damascus International Airport, which opposition activists say has become an on-off battle zone.

Fighting around Damascus has led airlines to suspend flights and prompted diplomats to leave, adding to a sense the fight is closing in. Hungary said on Wednesday it would shut its embassy. 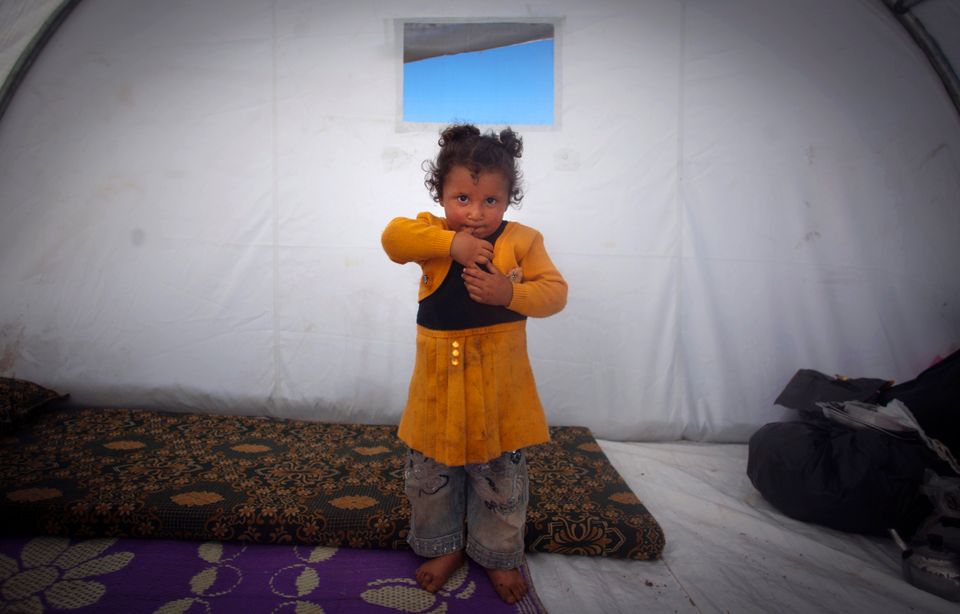 1 / 15
In this Wednesday, Nov. 7, 2012 photo, Fatma Zatar, 2, who fled with her family from the violence in their village poses for a portrait inside a tent at a camp in the village of Atmeh, near the Turkish border with Syria. Most of the displaced people in the tent camp rising near this village on the Syrian-Turkish border are children. All have fled the violence of Syria's civil war further south. Many have seen violence themselves, some have lost relatives, and most have trouble sleeping and panic when they hear loud noises or airplanes, their parents say. The Atmeh camp was born of necessity about three months ago, say the local rebels who run the place, distributing tents and food aid provided by a smattering of aid organizations.(AP Photo/Khalil Hamra)
AP