WASHINGTON -- Though former Secretary of State Hillary Clinton is courting top labor leaders, picking up union endorsements and criticizing Republican efforts to undercut unions as she runs for president, her campaign treasurer's ties to the stridently anti-union Walton family empire may raise questions about the campaign's commitment to labor rights.

Jose Villarreal, Clinton's treasurer, has deep ties to the Democratic establishment. A San Antonio-based consultant and former partner at the powerhouse legal and lobbying firm Akin Gump Strauss Hauer & Feld, Villarreal has long served as a trusted Clinton adviser and has had leadership roles on five consecutive Democratic presidential campaigns. At the State Department, Villarreal sent Clinton’s team messaging advice and served as the commissioner general for the United States’ pavilion at the 2010 Shanghai World Expo -- a role that earned him ambassadorial rank from President Barack Obama.

What makes Villarreal's role in the Clinton campaign intriguing is that he has remained within the orbit of the Waltons, America's richest family, even as Clinton has worked to downplay her own six-year term on the board of Walmart, the country’s largest private-sector employer. While Villarreal was on Walmart’s Executive Advisory Council until at least 2013, Clinton’s official campaign website biography makes no mention that she sat on the company’s board from 1986 to 1992. When questioned about Walmart’s anti-union stance, Clinton has said that she believes workers should be able to unionize and bargain collectively. She devoted just one paragraph in her autobiography to her time at Walmart, returned a donation from the company's PAC in 2005 and said in a 2008 campaign debate that the company's growth had "raised serious questions about the responsibility of corporations."

Clinton's attempts to distance herself from the retail giant may have been necessary for her to compete in Democratic primaries, since Walmart has for decades waged war against organized labor, a position abhorrent to many Democratic activists. In an acknowledgment Monday that Democrats and unions often have parallel interests, Clinton spoke out against “efforts across our country to undermine worker bargaining power, which has been proven again and again to drive up wages.” As Clinton goes about channeling this message to defend her left flank from Democratic primary rivals like Sen. Bernie Sanders (I-Vt.) and former Maryland Gov. Martin O’Malley, the presence of Villarreal on her campaign team suggests that there’s only so many degrees of separation she can put up between herself and a company infamous among progressives for its fights against the specter of unionization.

“Republican governors like Scott Walker have made their names stomping on workers’ rights, and practically all the Republican candidates hope to do the same as president,” Clinton said during an economic policy speech Monday. “I will fight back against these mean-spirited, misguided attacks. Evidence shows that the decline of unions may be responsible for a third of the increase of inequality among men. So if we want to get serious about raising incomes, we have to get serious about supporting workers.”

Though Villarreal’s lobbying career has already been the subject of media coverage, his stints on the boards of companies like Walmart have attracted much less attention.

Villarreal has spent decades on the boards of companies dominated by the Waltons, who remain a target of choice for the progressives whom Clinton's 2016 campaign is trying to win over. He was the lead director at Walmart; a board member at First Solar, an energy company where the Waltons are the largest investors; and a board member at Teach for America, the KIPP Foundation and Leadership for Educational Equality, to which the Waltons also have strong ties. (He has also served on the boards of several organizations less directly connected to the Waltons, like the National Council of La Raza, the Congressional Hispanic Caucus Institute, the U.S.-Mexico Foundation and the Center for American Progress.) 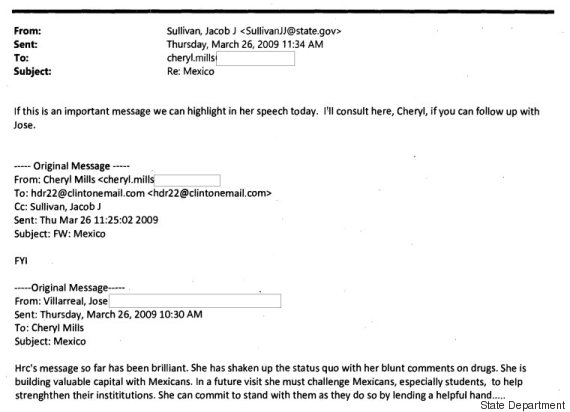 With O'Malley and Sanders trying to carve out a space to Clinton's left on environmental issues, Villarreal's First Solar board membership could become a liability. The Waltons hold a large chunk of stock in the company, which has lobbied for taxes on residential solar users and against incentives for rooftop solar. The company sees the growth of rooftop panels as a threat to its long-term financial interests, since it makes parts for larger-scale commercial installations. Villarreal left the First Solar board in the spring of 2012.

Obama used Clinton’s Walmart board membership against her during a 2008 campaign debate, but her Democratic rivals for the 2016 nomination haven't explicitly gone for that attack -- at least so far. The historical consensus is that Clinton championed environmental and gender causes on the board while avoiding disagreements over labor issues. But significantly less is known about Villarreal's eight years on Walmart's board, from 1998 to 2006, or about his impact as chair of the board’s committee on compensation, nomination and governance.

According to Walmart documents, Villarreal and his fellow governance committee members were responsible for reviewing “salary and benefits issues for the Company” and reviewing and providing “guidance regarding the Company’s reputation.”

Villarreal joined Walmart's board at a time when the pay gap between the company's male and female associates working the same jobs was the subject of some scrutiny. The Clinton campaign declined to comment as to whether Villarreal was aware of a 1995 report authored by Akin Gump, his firm, warning Walmart that the company’s workforce exhibited significant gender disparities in pay and promotions and that Walmart could be liable for millions in damages.

Gender equality is a major campaign issue for Clinton, who has advocated for women’s rights for decades. In her Monday policy address, she once again called for legislation to address paid leave and equal pay for equal work.

“It’s way past time to end the outrage of so many women still earning less than men on the job -- and women of color making even less,” she said.

Walmart's concerns over its reputation played a role in the company's decision to change some of its labor policies in 2004 to ameliorate complaints over gender disparities, wages and benefits, issues that Villarreal’s committee oversaw. John Opie, a Walmart director who served on the compensation, nomination and governance committee along with Villarreal, told The New York Times in 2004 that Walmart was ''very concerned'' about its image and was ''working very hard'' to improve perceptions of the company.

If Walmart comes up during the 2016 campaign, as it has in past Democratic primaries, it remains to be seen whether the company’s recent move to boost associate pay will make it less taboo for Clinton to speak positively of the company’s policies. Villarreal, for his part, acknowledged in 2009 that Walmart had an image problem. “What I would tell [former Walmart CEO H. Lee Scott Jr.] is that there was a great deal of misunderstanding about the company and that we had to address it head on,” he told the Times then. 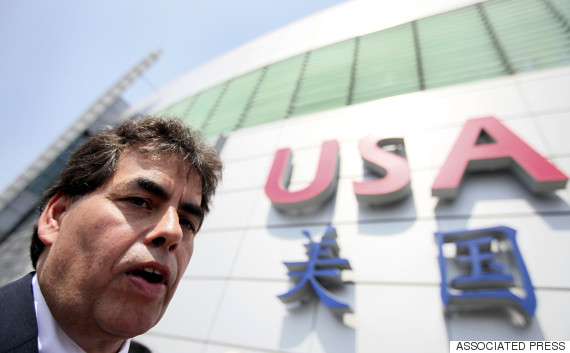 Jose Villarreal speaks with journalists after the official opening ceremony of the USA Pavilion at the Shanghai World Expo Monday, May 3, 2010, in Shanghai. (AP Photo/Eugene Hoshiko)

Another area of incongruence between Clinton and Villarreal regarding Walmart is the Foreign Corrupt Practices Act, the anti-bribery law that Clinton defended as secretary of state. Walmart lobbied against the law, even as it referred possible violations to the Justice Department.

Walmart’s international corruption charges emerged during Villarreal’s last year on the board. As the Times later detailed in a Pulitzer Prize-winning investigation, Walmart’s senior management in 2005 suppressed an internal inquiry into bribery allegations originating with the company’s Mexican affiliate, which had reportedly paid off a number of Mexican public officials in order to help Walmart expand more rapidly in that country. Though Walmart's lead investigator concluded that there was "reasonable suspicion to believe that Mexican and USA laws have been violated," the company sent the inquiry back down to a Mexican affiliate official who himself was suspected of perpetuating the payoffs. The internal investigation was buried and didn't come up again until the Times began to ask questions years later.

Walmart has yet to settle with the DOJ over the issue, but it's spent at least $612 million on legal fees and compliance restructuring costs over the past three years. The company has also changed its policies to mandate that any possible foreign corruption violations be reported to corporate headquarters and the board. It's unclear to what extent Villarreal would have been aware of the company's Mexico bribery inquiry during his tenure there.

When asked to comment about whether he was aware of the internal inquiry into the Mexican bribery allegations, Villarreal referred The Huffington Post to Clinton's campaign, which declined to comment. Walmart also did not respond to a request for comment as to Villarreal’s role on the board at the time. HuffPost reached out a number of former Walmart directors, one of whom said he could not comment on the bribery allegations because they are the subject of ongoing litigation. (Villarreal and other current and former directors have been named as defendants in a lawsuit against the company regarding the bribery allegations.) Other former directors did not respond to requests for comment.

Ben W. Heineman Jr., a senior fellow at the Harvard Law School’s Program on Corporate Governance, wrote in 2012 that “Wal-Mart appeared to commit virtually every governance sin in its handling of the Mexican bribery case,” adding that the company's board had to review and fix “the numerous company internal governing systems, processes and procedures that appear to have been non-existent or to have failed.”

But, in addition to dealing with the dangerous legal issues facing Wal-Mart, the current board must ask and answer a number of hard questions about how the company was governed and managed. What was the failure of the then board in not overseeing whether the company had adequate compliance systems and processes in such a fundamental area as compliance with the Foreign Corrupt Practices Act? Did the board know anything about the matter then -- and did it fail to act properly (as [noted] above, there is no information yet that the board was informed)? What were the fundamental system and process failures, have they been fixed, and what needs to be done to fix them in the future?

The Clinton campaign is not totally without recourse if any questions arise about Villarreal’s connections to the Waltons. Should that happen, the campaign can point to its hiring of Nikki Budzinski as labor outreach director in May. Budzinski is a former national labor coordinator for the United Food and Commercial Workers, the union that has been most dedicated to making Walmart more labor-friendly by backing associate-led advocacy groups like OUR Walmart.