If Hillary Clinton wins the Democratic Presidential nomination, then how strong a candidate will she be against a Republican nominee who, as a representative of the conservative party, is proudly and openly supporting conservative positions?

Taegan Goddard of The Week headlines on May 11th, "Is Hillary Clinton Flip-Flopping or Just Evolving?" and he notes several issues on which she has rhetorically veered to the left recently. He further notes that one of the things that probably shaved a crucial few percentage-points off the losers in previous Presidential general-election contests and caused them to lose, such as John Kerry and Mitt Romney, was the given candidate's primary-campaign rhetorical flip-flops that had been made during the Party's primaries in order to be able to wrap up that candidate's Party-base so as to win its Presidential nomination and so be able to become a participant in the general-election contest.

In other words, the record is clear: such flip-flops reduce the ardor of the given Party's voters to come to the polls and vote on Election Day. The opposite Party's nominee, who hasn't flip-flopped quite so blatantly, wins the general election because that Party's base then comes to the polls in droves on Election Day in order to ensconce into the White House someone whom they passionately want to be there, someone whom they strongly believe represents their values. Thus, George W. Bush and Barack Obama became Presidents, while Al Gore, John Kerry, John McCain, and Mitt Romney didn't.

So: in order for Hillary Clinton to be credible in the general election against whomever the Republicans end up nominating, she will need to out-compete that nominee on consistency, and not only on ideology. Polls show that the two Parties are overall fairly-equally close to the viewpoints of the American electorate on ideology; but, in the final election, what makes the decisive difference is usually instead the passion-factor: the devotedness of the given nominee's followers, and this means mainly the Party (but also independents who respect the given person's consistency or "honesty"). Flip-floppers don't get it, and they never can, especially when things become closer and closer to Election Day and the voters become more concerned about the issues than they were at the contest's start (i.e., before the debates and the advertisements).

The stakes at the end of a Presidential contest are more stark than they ever were before. The key factor then becomes trust: if you don't trust your Party's nominee, you're a lot less likely to go to the polls to vote for him or her. That's a major reason why the U.S. has one of the lowest of all nations' voter-participation rates.

If Hillary Clinton becomes the Democratic nominee, then how will she be able to attack the Republican nominee for being a tool of Wall Street -- which she will have to do (and do convincingly) in order to beat the Republican?

Here's her record, and here are its results: 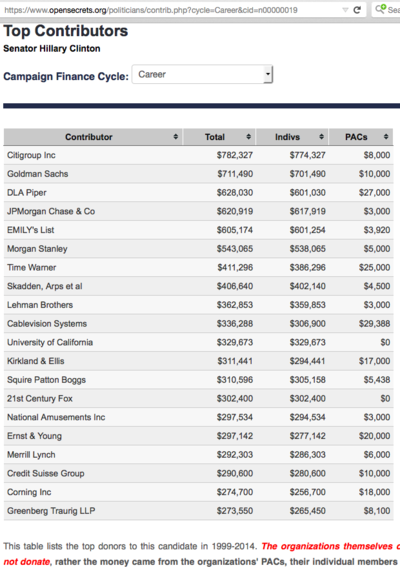 How many Democrats will be too disheartened even to show up and vote? And how many of them will even be wondering whether perhaps some of the "private" emails that Ms. Clinton had wiped off her computer's (even off of her server's) hard drive, might have been emails with some of the Wall Street bigs (and their law and accounting firms) who were on that list of her top campaign contributors? Even the legality of her having destroyed those emails is far from clear. So: how will she be able to motivate her Party-base, when that final moment arrives?

If Hillary Clinton becomes the Democratic nominee, then trust will be the killer campaign-issue, even if it's not an issue that's being discussed in the campaign. The closer and closer to Election Day, the bigger and bigger that issue will be. We're as far from it now as we can be, but, with Hillary Clinton, it's already rising, and no one has any suggestion of a way in which it will likely recede. And this is only the start.

Investigative historian Eric Zuesse is the author, most recently, of They're Not Even Close: The Democratic vs. Republican Economic Records, 1910-2010, and of CHRIST'S VENTRILOQUISTS: The Event that Created Christianity, and of Feudalism, Fascism, Libertarianism and Economics.