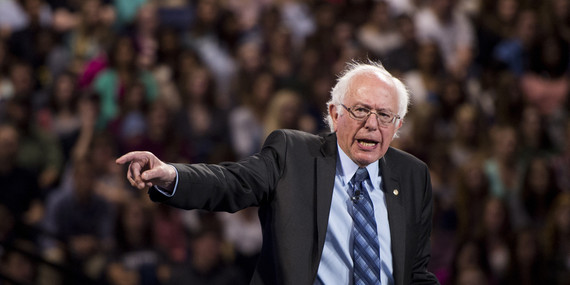 There's a reason Hillary Clinton finished third in the 2008 Iowa Caucus, behind Barack Obama and John Edwards. In addition to her costly vote supporting the war in Iraq, Clinton has always pleaded "guilty" to being a moderate. It's this centrism (even when progressive values are now popular throughout the nation) that fuels questions about why she opposed gay marriage or as The Huffington Post writes, accepted "$133,246 to the Ready for Hillary PAC" from major prison lobbyists.

The Iowa Caucus was once labeled as part of the Democratic Party's "extremes" by Hillary Clinton in a recently disclosed State Department email. However, there's nothing extreme about championing progressive values, even when they're not popular. Bernie Sanders has a history defending progressive principles, while Clinton has consistently veered to the right on war, foreign policy, trade, and even marijuana legislation.

There's also nothing extreme about opposing Keystone XL, but Clinton once supported the pipeline. NBC News writes "she helped lay the foundation for it as secretary of state." As quoted in The Nation, Clinton was once "inclined" to approve Keystone and even stated, "We're either going to be dependent on dirty oil from the Gulf or dirty oil from Canada."

Now, she opposes the pipeline that could damage water aquifers irrigating much of the central U.S., but before opposing it, she continually dodged questions.

Also, is it an extreme stance to refuse money from prison lobbyists? Bill Clinton just recently apologized for his role in the mass incarceration epidemic, stating "I signed a bill that made the problem worse."

After Bill Clinton's acknowledgment of his role in mass incarceration, why did Hillary Clinton accept prison lobbyist donations?

Bernie Sanders has a campaign funded by grass roots support and Martin O'Malley doesn't accept money from the prison lobby. Therefore, why would Hillary Clinton accept the money of prison lobbyists, especially when ending the plague of mass incarceration is an issue Democrats are supposed to champion?

Lobbying firms that work for two major private prison giants, GEO Group and Corrections Corporation of America, gave $133,246 to the Ready for Hillary PAC, according to Vice. Those companies operate a number of criminal and immigrant detention facilities, some of which have been plagued by allegations of abuse and poor treatment of detainees.

Immigrant and civil rights groups have urged Clinton to stop accepting contributions from donors with ties to GEO and CCA. Earlier Thursday, in announcing its co-founder Cesar Vargas was moving to the campaign of Sen. Bernie Sanders (I-Vt.), the advocacy group Dream Action Coalition singled out Clinton for accepting those contributions.

I've been attacked on Twitter for pointing out the fact Clinton isn't a progressive on key issues like war and foreign policy. I've also been wrongfully accused of being a libertarian and Rand Paul supporter (because of an article based on an anti-war stance), but asking why Clinton accepted money from the prison lobby is a valid concern. I am not a Paul supporter and I'm not a Republican operative; an amusing ad hominem attack from my detractors.

For the record, I'm a lifelong Democrat and my motivation to vote only for Bernie Sanders is found in this YouTube video. If you ever wonder why I write about Bernie Sanders and why I question Hillary Clinton's progressive credentials, either watch my YouTube segment or simply listen to Clinton's Congressional speech on why she voted for Iraq.

I am a progressive who wants a logical explanation why Clinton supporters willfully accept a candidate who is funded by prison lobbyists and will have a neoconservative foreign policy. Quoted in The New York Times, noted conservative historian Robert Kagan explains what a Clinton presidency would look like in terms of foreign policy:

But Exhibit A for what Robert Kagan describes as his "mainstream" view of American force is his relationship with former Secretary of State Hillary Rodham Clinton, who remains the vessel into which many interventionists are pouring their hopes. Mr. Kagan pointed out that he had recently attended a dinner of foreign¬policy experts at which Mrs. Clinton was the guest of honor, and that he had served on her bipartisan group of foreign ¬policy heavy hitters at the State Department, where his wife worked as her spokeswoman.

"I feel comfortable with her on foreign policy," Mr. Kagan said, adding that the next step after Mr. Obama's more realist approach "could theoretically be whatever Hillary brings to the table" if elected president. "If she pursues a policy which we think she will pursue," he added, "it's something that might have been called neocon, but clearly her supporters are not going to call it that; they are going to call it something else."

Yes, Hillary Clinton will have a neoconservative foreign policy, and there's more evidence than just the quote above in The New York Times. Like Kagan says, her supporters aren't going to call it "neocon," but "it's something that might have been called neocon."

Bernie Sanders, on the other hand, says "I'll be damned" if more Americans are sent back to counterinsurgency quagmires in the Middle East, and calls for Saudi Arabia and others in the region to lead the fight against ISIS. Sanders won the Congressional Award from the VFW and addresses the issues veterans face from prolonged wars. The next president will have to decide if more U.S. troops are sent back to failed wars and I trust Bernie Sanders infinitely more than Hillary Clinton.

As for her failed bombing of Libya, Clinton has never addressed the devastating civil war that resulted from this bombing. Since the next president will have the AUMF's authority to send troops anywhere, and bomb anywhere, I simply don't trust Clinton with this power; her prior decisions have been disastrous.

Republicans, not Democrats, have hawkish views on foreign policy.

But you're being unfair to Clinton!

Actually, it's Hillary Clinton who stated that progressive values are upheld to their extremes in the caucus battles. Quoted in a recent NBC News article titled Did Hillary Clinton Diss the Iowa Caucuses in Private Email?, Clinton's own words explain this thought process:

The latest State Department release of Hillary Clinton emails contained this message from Clinton to friend Sidney Blumenthal: "If Mittens [Mitt Romney] can't beat Grinch [Gingrich] in Florida, there will be pressure on state Republican parties to reopen or liberalize ballot access especially in the caucuses, which as we know are creatures of the parties' extremes."

Clinton's remark shouldn't be too surprising given that she lost caucuses contests - including Iowa's - to Barack Obama in 2008.

Therefore, it is apparent Clinton's viewpoint of progressive politics in the caucuses correlates directly to why she pleads guilty to being a moderate.

Thus, history will repeat itself, primarily because Clinton has become even more conservative over the years. Iowa voters can see through a candidate and will set the tone for 2016, like they set the tone for 2008. Bernie will make history in Iowa, because one Iowa voter quoted by Iowa Public Radio has summed up exactly why I write so much about Sanders:

Retired police officer and military veteran Gordon Reed drove in from Red Oak. He hit on some additional themes in support of Sanders, including his vote against the Iraq war.

"He has been consistent in his views," Reed says. "And also I'm a Vietnam Veteran. I know what war does."

We're talking about presidential powers, not Congressional votes, and in terms of foreign policy, Clinton is a neocon while Sanders upholds Democratic ideals.

Bernie Sanders and O'Malley have indeed been consistent in their views. Only Sanders, however, voted against Iraq when America needed a progressive to stand up to Bush, Cheney, and Rumsfeld. Similar to 2008, Iowa will lead the nation in ushering in a new era of progressive politics, not a regression towards conservatism with Hillary Clinton. After all, Bernie Sanders soundly defeats Republicans in a general election, without an expanding FBI email investigation, and without the unfavorable ratings possessed by Clinton's campaign.