As someone who has attended Bernie Sanders rallies and written about his impressive candidacy, I expected him to prevail in the Milwaukee debate. But Hillary Clinton prevailed by going to the mat for her former boss. 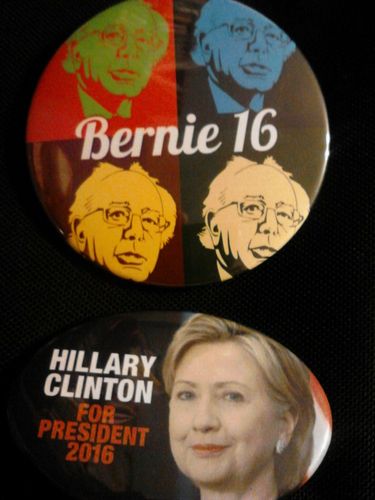 Early in the debate, Vermont Senator Sanders took the early lead on Wall Street and Clinton's connections to that group. But Hillary Clinton climbed back in it pointing out the discrepancy between Sanders' claims of opposition to regime change and his record in voting for it. Claiming "it was unanimous" didn't help Sanders' case. So it came down to the wire, with both evenly matched. Then both candidates were asked to name good examples of leaders.

Sanders mentioned FDR and Winston Churchill. Clinton noted FDR and Nelson Mandela briefly, but pivoted to a defense of President Barack Obama, adding that Sanders had criticized the Democratic President. It was the first time I had ever seen Sanders rattled. The heated exchange went like this:

He wrote a forward for a book that basically argued voters should have buyers' remorse when it comes to President Obama's leadership and legacy.

And I just couldn't agree -- disagree more with those kinds of comments. You know, from my perspective, maybe because I understand what President Obama inherited, not only the worst financial crisis but the antipathy of the Republicans in Congress, I don't think he gets the credit he deserves for being a president.... who got us out of that... put us on firm ground, and has sent us into the future. And it is a -- the kind of criticism that we've heard from Senator Sanders about our president I expect from Republicans. I do not expect from someone running for the Democratic nomination to succeed President Obama.

As a result of his efforts and the efforts of Joe Biden against unprecedented, I was there in the Senate, unprecedented Republican obstructionism, we have made enormous progress.

SANDERS: But you know what? Last I heard we lived in a democratic society. Last I heard, a United States senator had the right to disagree with the president, including a president who has done such an extraordinary job.

That's what I said. That is what I believe.

SANDERS: President Obama and I are friends. As you know, he came to Vermont to campaign for me when he was a senator. I have worked for his re-election. His first election and his re-election.

But I think it is really unfair to suggest that I have not been supportive of the president. I have been a strong ally with him on virtually every issue. Do senators have the right to disagree with the president? Have you ever disagreed with a president? I suspect you may have.

CLINTON: You know, Senator, what I am concerned about, is not disagreement on issues, saying that this is what I would rather do, I don't agree with the president on that, calling the president weak, calling him a disappointment, calling several times that he should have a primary opponent when he ran for re-election in 2012, you know, I think that goes further than saying we have our disagreements.

As a senator, yes, I was a senator. I understand we can disagree on the path forward. But those kinds of personal assessments and charges are ones that I find particularly troubling.

SANDERS: Well, one of us ran against Barack Obama. I was not that candidate.

Sanders got only tepid applause at best for that last line, because voters recognize that Hillary Clinton was running for president in 2008, not trying to stop Obama. But by calling for a primary opponent for Obama in 2012, that was a different story, one which could have sunk the Democratic Party's chances. Nothing takes out a president like a primary opponent.

Sure, Sanders didn't slam Obama personally in his foreword to the Bill Press book Buyer's Remorse. But the book blasted Obama, and Sanders had to know what the book was about. If not, he should have asked at least. But he didn't. Clinton is right on this one.

Obama took plenty of abuse from Republicans. The last thing Obama needed was friendly fire when trying to muster support for initiatives that Sanders otherwise claims to support. By making the nomination a referendum on Obama, Secretary Clinton should shore up her support among Democrats who realize what the president has done for the party, instead of those who complain he didn't do anything for Democrats.