Last week, we ran a software analysis on clarity of speech and word usage for Donald Trump's acceptance speech at the Republican National Convention. Now, it's Hillary's turn. VisibleThread, a firm that analyzes documents much like tools that analyze data, using software to test and audit written content for risk and content quality, generously offered to run the speeches through its software to give us a better look at clarity and theme.

It turns out that for all of her super-intellect, Hillary speaks in simple terms. Compared with Donald Trump's 8th grade comprehension level on his speech, Hillary spoke at a 5th grade education level. Machine translation? She spoke in shorter, simpler sentences with considerably less passive voice. By VisibleThread's metric, Clinton's language was 13% clearer and more direct than Trump's. That said, both speeches tested as widely accessible to an adult audience.

Both candidates frequently used words like "America," "people," and "country," but thematic differences begin to emerge when you look closer. While both candidates addressed the same major themes, the nuance in word usage is interesting: 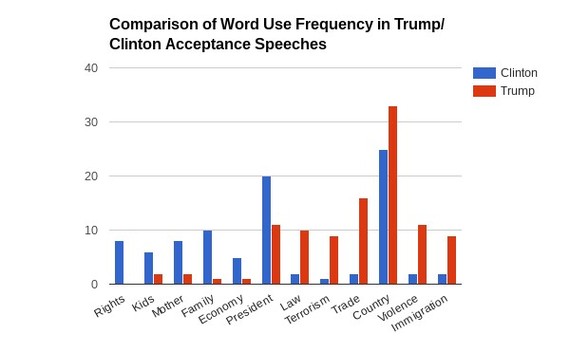 Clinton was much more likely to use words like "rights," "kids," and "family" that have positive, personal associations, while Trump leaned heavily on words like "trade," "law," and "terrorism." Whether you think the word graph skews by gender or optimism, is up for interpretation. Clinton also won the word count for her mentions of the economy and "job(s)".

When the speeches are compared, Hillary demonstrates a parsimonious use of language. Take a look at these two statements on gun control and guess who said which?

The first task for our new Administration will be to liberate our citizens from the crime and terrorism and lawlessness that threatens their communities. America was shocked to its core when our police officers in Dallas were brutally executed. In the days after Dallas, we have seen continued threats and violence against our law enforcement officials. Law officers have been shot or killed in recent days in Georgia, Missouri, Wisconsin, Kansas, Michigan and Tennessee. On Sunday, more police were gunned down in Baton Rouge, Louisiana. Three were killed, and four were badly injured.

And if we're serious about keeping our country safe, we also can't afford to have a President who's in the pocket of the gun lobby. I'm not here to repeal the 2nd Amendment. I'm not here to take away your guns. I just don't want you to be shot by someone who shouldn't have a gun in the first place.

If you guessed Trump for the first one, you are correct.