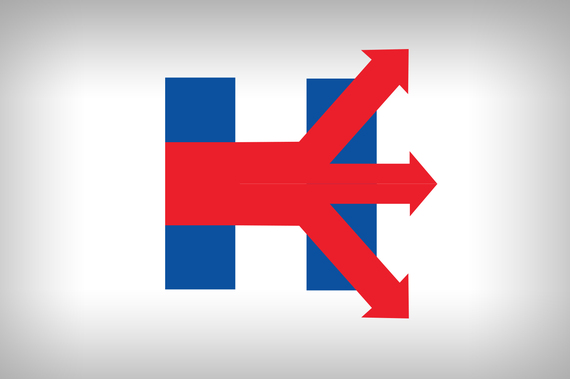 When I interview a new prospect for my business, I'll inevitably ask them two questions: What have you done and what are your goals?

Their first answer lets me know if they meet the qualifications of the job and understand my needs. The second one tells me who they are, what inspires them, and where they want to go.

It is also the missing component in Hillary Clinton's current campaign. Now, all opinions on her and the other candidates strengths and weaknesses aside, what her campaign is missing here is a big deal and, given that the Clinton campaign is in the process of retooling, there are a few lessons in branding they should take to heart as they decide their next move.

First off, she needs to understand what IS working for her competitors and why, (which is a lot, in fact):

Bernie Sanders' brand, for example, is that of the progressive outsider and his message is that the political system is corrupt and built for the top 1 percent. His goal is to forge a political revolution, involving everyone's help to bring real change to government and help the disenfranchised believe that, as a force, they can make change.

It's easy to understand and, while there is more meat on the bone there, for the average American who consumes news and information in small bites, it communicates the message clearly and quickly. Furthermore, Sanders rarely deviates from that message and integrates it in every aspect of his campaign and ties it to every part of the discussion. Once again, the repetition of a brand message is crucial to getting the populace at large to remember what you want them to. In addition, it reinforces Sanders authenticity by showing his consistency of message and framing his belief system.

Sanders' slogan: "A Future To Believe In"

Donald Trump, a man who understands marketing better than most politicians ever will, also has a compelling message that equally resonates with the public. For him, he is the American dream personified who sees politicians as being ineffective and bought, and the only way to make change and bring back the salad days of this country is to bring in someone who is not beholden to lobbyist money and who has the real, hard business experience of negotiating and getting things done (not just pretending to or kicking the ball down the road, which is what most of the public sees our politicians' actions as). Trump's message and approach are also unique. His authenticity and outsider status is reinforced through his unwillingness to "play the game" and, as a result, many of his negatives are overlooked by followers who understand that, unlike seasoned politicians, he actually believes what he preaches.

And Sanders and Trump are not alone. If you look back on the last few decades, you'll find that the campaigns that won the presidential election were all built on the strong platform of an inspiring brand message and an understandable narrative.

Consider Barack Obama's 2008 campaign, one of the most well executed of our time:

Obama's slogan: "Change We Can Believe In" (In fact, Sanders has even co-opted the same exact typeface and layout as Obama's in his current slogan.)

Bill Clinton's 1992 campaign was equally memorable and was not only focused on change but had the added benefit of the candidate having grown up in a town whose name was the essence of that forward-thinking message. That, my friends, is a marketer's dream.

Clinton's slogans: "I Still Believe In A Place Called Hope" and "It's Time To Change America".

Lets not forget Ronald Reagan's visually rich re-election campaign slogan, maligned at the time for lacking substance but who can say they don't remember it or what it stood for:

"It's Morning In America Again"

Sure, a lot of it is schmaltz but it strikes a positive chord with us and, if that candidate's persona jibes with their campaign theme, they're in pretty good shape.

Furthermore, every successful modern presidential candidate has had a brand message of hope and aspiration that looked forward and not backwards. Every aspect of these campaigns were built around that message and a strong narrative that tied into it. We knew who these candidates were, what they stood for, and where they wanted to take us.

And this brings us back to Hillary Clinton's campaign. Beginning with her logo, which looks like a hospital road sign, her current campaign has no over-arching theme to hang its hat on. It is befuddling, given the brilliance of her husband's 1992 campaign or that of her last employers, that she and her team have not grasped the importance of this. In fact, her current campaign seems to have more in common with the campaign of Bob Dole in 1996.

Dole's campaign was built on the platform that he had the right resume for the job. He was pragmatic and dour, a contrast to Bill Clinton's sunny and bright disposition and forward looking campaign. He had a difficult time describing what his goals were in the bigger picture and resorted, instead, to discussing tactics on individual issues. Sound familiar?

Unlike Hillary Clinton's current slogan, Dole at least had one that was modestly memorable:

"A Better Man For A Better America"

And what, then, is Clinton's current campaign slogan?

While I can see that she feels it's valuable to include herself in the mix (as part of the U.S.), given that Secretary Clinton spends too much of her narrative talking about her own qualifications, why not go with the more altruistic "FIGHTING FOR YOU". Or, for that matter, why even use a negative term like "fight" in a slogan that should evoke a positive, inspirational theme anyway? This is a big part of the problem here. Where the focus should be on the electorate (which would also make it easier to build her larger narrative) it is, instead, focused on her. And both her slogan and campaign are missing crucial ingredients, such as the words and adjectives that connect us, give us goose bumps and get us motivated, like "AMERICA, BELIEVE, HOPE, AND CHANGE".

If I were consulted (which I am not), I would choose to tie my message to the prosperity of the 1990s (for those who remember it), and the improved economy under Obama (for the millennials who benefit from it), and explain more clearly how she is the right vehicle to take that success forward for all those feeling disenfranchised. Maybe her camp believes that's her message but, if it is, it's certainly not clear to others or myself.

For Clinton to succeed well in the next stages of this primary (and through to the election), she needs to craft a compelling brand message and narrative that is less about her and more about the rest of us. It is the hallmark of every successful presidential campaign and no amount of details on policy plans will break through the clutter unless they have a larger umbrella to hang them under -- and a way to tie them back to an narrative of what makes her the best vehicle for change.

Lets face it. Most of us will never really understand the true heart of our presidential candidates, but with an effective brand message, we can understand their story, their vision, and their passion to share it with us. A great political brand campaign, in that respect, is not a trick to ruse the public. It's information for the public good, and doing it right can ensure that a candidate has the best possible chance to declare to the public who they are, what they really stand for, and why they deserve your vote.