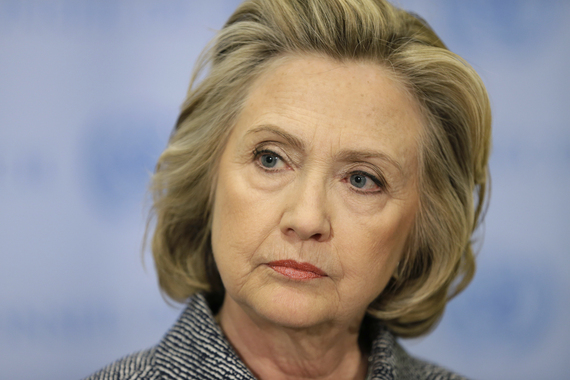 By March 26th, she led Sanders among African-Americans by just nine points.

It's all part of a dramatic national trend that has seen Clinton's support among nonwhite voters dwindle to well under a third of what it was just a month ago -- not nearly enough support to carry her, as it did throughout the Deep South, to future electoral victories in the Midwest and Northeast.

So no, it's not a coincidence that, in the 18 state primary elections since March 1st, Bernie Sanders has won on Election Day in 12 of them.

Of Clinton's five post-March 1st Election Day wins, four (Mississippi, Louisiana, Florida, and North Carolina) were in the South, and were made possible by a level of support among nonwhite voters that Clinton no longer enjoys. Indeed, this coalition was already collapsing when Clinton won in Florida and North Carolina on March 15th. At the polls in North Carolina on Election Day, Clinton won just 52 percent to 48 percent, including the tens of thousands of provisional ballots cast (which, still being counted, have gone, as expected, 57 percent for Senator Sanders). In Florida, the 36-point edge Clinton held in the first three weeks of early voting (February 15th to March 7th) dwindled to a 13.4-point edge among those who made their decision regarding who to vote for from March 8th to March 15th.

In short, the Clinton campaign is in the midst of an historic collapse -- much of it due to the unraveling of support for Clinton among nonwhite voters -- and the national media has yet to take any notice.

Clinton's 48-point lead in New York less than two weeks ago is now just a 12-point lead, according to the latest Quinnipiac Poll. That poll shows Sanders with approximately 300 percent more support among African-American voters in New York than he had in Mississippi earlier this month.

Meanwhile, in the only poll taken in Indiana, Sanders is said to be beating Clinton handily.

Sanders is leading by 8 points in West Virginia.

And the only polling done so far in Kentucky -- among nearly 1,000 students at the University of Kentucky -- has Sanders up on Clinton there by more than 70 points.

But what the latest Reuters polling underscores is that even Clinton's support in the South has collapsed.

Between February 27th and March 26th, Clinton's lead among Southerners -- the group whose primary votes (and thus delegates) comprise the entirety of her 228-delegate lead over Bernie Sanders -- decreased from 15 points to just 6. Given the percentage of Southern Democrats who are African-American, even without cross-tabs available there is reason to believe Clinton's declining numbers among nonwhite voters are partially responsible for this decline. Certainly, it was the strength of Clinton's support among this polling demographic that assured Clinton of massive delegate hauls in nearly every Southern state: according to CNN exit polling, on March 1st black voters in Mississippi favored Clinton by 77 points, in Georgia by 71 points, in Virginia by 68 points, in Texas by 68 points, in Tennessee by 79 points, in Arkansas by 66 points, and in Alabama by a whopping 85 points.

Now that Clinton's lead among black voters nationwide is fluctuating between the high single-digits and the mid-teens, it appears the sort of voting margins among nonwhite voters that made Clinton's present delegate lead possible are never coming back.

Case-in-point: last week, Sanders beat Clinton in three of the ten most diverse states in America (Hawaii, Washington, and Alaska) by 39.8 points, 45.6 points, and 61.5 points, respectively.

Yet even after "Western Saturday," the media clung to its narrative that Sanders cannot win among nonwhite voters, arguing -- sometimes implicitly, often explicitly -- that only strong performances among African-American voters would be sufficient to dislodge the narrative the fourth estate has run with about Sanders since late 2015. Indeed, after the release of the latest Marquette University poll in Wisconsin, Harry Enten of FiveThirtyEight.com tweeted, "All I see on the Democratic side is the Marquette poll matching the demographic expectations [in the primary race]."

In fact, the poll showed Clinton leading Sanders among all nonwhite voters by a mere 16 percent.

Again, as a point of comparison, Clinton beat Sanders by 82 points among nonwhite voters in Alabama, by 66 in Arkansas, 62 in Georgia, 71 in Tennessee, 48 in Texas, and 52 in Virginia.

Outcry among Sanders supporters at the false narrative regarding Sanders and nonwhite voters continues to go unheard, even as, today, Public Policy Polling data showed the Senator beating Clinton among black voters in Wisconsin by 11 points. Instead of a mass mea culpa from the media, Sanders supporters were confronted with a Chicago Tribune column, published today, that says of polling in the Democratic primary race, "Of course polls can change, but there's no particular reason to believe they will."

Three weeks ago, Sanders won Michigan while losing among nonwhite voters by 29 points. So the 16-point deficit reported by Marquette and the 11-point advantage reported by PPP constitute dramatic improvements for Sanders over even a recent winning performance in the Midwest -- in fact, Sanders' most important win of this election season. This bodes well for Sanders' future performance in other key Midwestern states like Pennsylvania, South Dakota, and Indiana.

As for Sanders' performance among nonwhite voters in the Northeast -- where New York, Connecticut, Rhode Island, and New Jersey voters will head to the polls in the coming weeks -- it's always been substantially stronger than the media, again inexplicably stuck on Deep-South exit polls, has claimed it to be.

In short, when the media -- which seems to be reporting election results as though today were the "SEC Primary" -- indicates that Sanders is in trouble in upcoming states with slightly more diverse populations, it's not clear what recent numbers they're looking at. Though the nonwhite voting population in the upcoming primaries and caucuses is exclusively a Midwestern and Northeastern one, the media appears to be ignoring all extant data from Wisconsin, Michigan, Massachusetts, and New Hampshire in favor of exit polls from states -- like Alabama -- that are nothing like these four politically, culturally, or in any other respect.

For those wondering about the exit polls in the Midwestern states that voted in mid-March -- for instance, Illinois, Ohio, and Missouri -- we can say that these, too, show that Clinton's lead among nonwhite voters outside of the Deep South is nothing like it was in those red-state strongholds.

In other words, nonwhite voting offers the media a clear and unambiguous narrative about Sanders -- an unmissable trajectory -- if only they're willing to see it.

And the same dramatic trajectory -- albeit in the opposite direction -- is evident for Clinton.

Indeed, putting aside for a moment her loss of support among African-American voters, Clinton has offered the media a narrative of her domination among Latino voters that likewise has taken a serious hit of late.

While Clinton won early voting in Arizona -- which took place around the time of voting in the Deep South -- by a 25.4 percent margin, Election Day and provisional ballots in the heavily Latino state (which all came in as Sanders was decimating Clinton's lead among nonwhite voters in mid-March) favored Sanders 51.4 percent to 48.6 percent (82,470 votes for Sanders, 77,849 for Clinton). Given that Arizona has the sixth-largest Latino population of any American state, it's exceedingly difficult to imagine Sanders beating Clinton in non-early voting there by nearly 3 points without performing exponentially better among Latinos than he had at the beginning of the month (e.g., his 42-point loss among Latinos in Texas on March 1st, which contributed substantially to his 32-point loss in the state).

It's worth noting, too, that Arizona still has thousands of predominantly Sanders-voter provisional ballots to count, so the Senator's 3-point margin in Election Day and provisional voting there is almost certain to widen. And the counties now giving him the largest additional margin in provisional voting are counties with sizable populations of Latino voters.

In short, there simply is no evidence available to suggest that Hillary Clinton's robust coalition of nonwhite voters still exists -- certainly not in anything like the form it was just four weeks ago. How else to explain an 82-point margin among nonwhite voters in Alabama, and similar margins in every other Southern state, on March 1st, and just a 6-point lead among all Southern Democrats (who are, depending upon the state, between 27 percent and 71 percent African-American) on March 26th?

Indeed, even where Clinton now outperforms Sanders among nonwhite voters, the margin -- when and as there is one -- is perfectly in keeping with competitive politics in the contemporary era. And it is dwarfed, as it happens, by Sanders' lead among other key groups, notably voters under 30 (particularly Latino voters under 30) and independent voters.

The Clinton-Sanders tilt remains at a stage in which nearly all the real-time data favors Sanders, and all the television and print coverage favors Clinton because of a delegate lead she built up during Deep-South voting a month ago. The race as it is being reported therefore bears no relation to the race as it is, which is why the Clinton camp has all but pulled out of Wisconsin -- anticipating a sizable loss there that will emphasize the momentum (actual and internals-supported) Sanders developed in Mountain-state and Western voting over the past two weeks.

Consider: in North Carolina two weeks ago, Sanders handily defeated Clinton among white voters (+9) and narrowly lost among all voters on Election Day (-4). However, the Senator's performance (-61) among African-American voters -- many of whom voted early, well before March 15th -- doomed him to lose the state as a whole by 13.8 percent.

If Sanders had had the African-American support during early voting (and some Election Day voting) in North Carolina that he enjoys today, he would have lost all voting in North Carolina by fewer than four and a half points -- 52.7 percent to 47.3 percent (514,447 for Clinton, 460,828 for Sanders). But here's the key: in a Midwestern or Northeastern state, rather than a Southern one -- indeed, in any state with racial and ethnic demographics in the middle 50 percent of American states -- those same internals would result in a massive Sanders win.

Which, as it happens, is what the State of Wisconsin may well be for Sanders in just five days.

In other words, hold onto your hats, folks.