BEIRUT -- Fighting the so-called Islamic State, as the narrative is told in the West and the Sunni Gulf states, is becoming seen as "nakedly sectarian," as the Washington-based Syria commentator Hassan Hassan wrote in the Financial Times last week. The fighting in Fallujah and the prospective battle for Raqa'a, he wrote, "offer ISIS an opportunity to present itself as a custodian of the Sunni, especially in Iraq, where it has established itself as the only Sunni militant group able to stand up to militias supporting the Shia-dominated government."

It is a narrative that is gaining currency in Washington as the administration strains to dress up its allied fighters in northern Syria, which are dominated by the Kurdish group the YPG, as somehow national and not sectarian. Indeed, the U.S. administration seems highly susceptible to this accusation. The danger of appearing anti-Sunni by pursuing the war on ISIS may have some superficial plausibility but the allegation, in fact, is Orwellian in nature. ISIS and fellow takfiri jihadists, in their war against apostasy, are essentially following the doctrine of Muhammad ibn Abd al-Wahhab, one of the co-founders of Saudi Arabia. 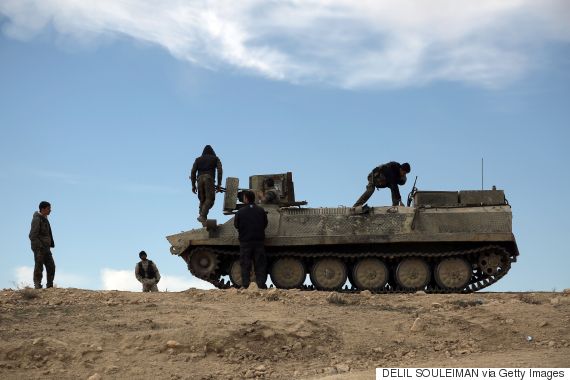 Fighters from the Syrian Democratic Forces, an alliance dominated by the YPG, in northeast Syria on Feb. 19. (DELIL SOULEIMAN/AFP/Getty Images)

Wahhab proclaimed those who did not accept his puritan monotheism as apostates and idolaters who should be killed immediately. And now, Shiites, Alawites, Zaidis, Druze, Ismailis -- and Kurds, who are mostly Sunni Muslim -- are defending themselves and their families from the truly fundamentalist zealotry of neo-Wahhabism that murders all whom it deems apostate. To reverse the narrative and cast their efforts to defend themselves as somehow sectarian is bizarre -- especially since the bulk of the Syrian army and Kurds fighting ISIS are themselves Sunni Muslims.

To fight ISIS is not anti-Sunni. To fight ISIS is to be against Wahhab's revived doctrines. The leading Iraqi commentator Hayder al-Khoei highlighted that in a recent op-ed:

The tip of the spear in Falluja is not an Iranian-backed paramilitary group but the U.S.-created Counter Terrorism Service and its elite U.S.-trained Special Forces known locally as the Golden Division. These forces, besides being a mixed Shia-Sunni unit, are led by a Kurdish commander ... At a time when sectarian dynamics is one of many factors fueling the crises in Iraq and beyond, it is important for Western journalists and analysts to not be more sectarian than the Iraqis on the ground actually fighting ISIS.

In short, the ephemeral global narrative does not relate well to the facts on the ground where there is much less sectarianism than this Western-Gulf narrative purports to exist.

But let that pass. This narrative, echoed widely beyond the Financial Times, is Orwellian in another way. It serves another deeper purpose. It has much to do with finding and articulating, as Jim Lobe notes, the point of intersection between liberal interventionism and neoconservatism. This intersection is the subject of a May 16 report from the Center for a New American Security, which was drawn up by a bipartisan task force of 10 senior members of the U.S. foreign policy establishment and augmented by six dinner discussions with invited experts.

Their approach is to cast Iran as the source of all 'regional tensions' and to hold onto America's Gulf bases in order to be a 'force that can flex across several different mission sets and prevail.'

It is, in a sense, the riposte from the two interventionist wings of American politics to Trump's iconoclasm in foreign policy. And, Lobe writes, "it's fair to predict that the above-mentioned report is likely to be the best guide to date of where a Hillary Clinton presidency will want to take the country's foreign policy."

The report is all about how to maintain America's benevolent hegemony -- or how to maintain and expand today's "rules-based international order," which implies maintaining and expanding the geo-financial order as much as the political order. As we saw in U.S. Defense Secretary Ashton Carter's interview with Vox, there are clear, though somewhat cushioned, echoes of the 1992 U.S. Defense Planning Guidance. 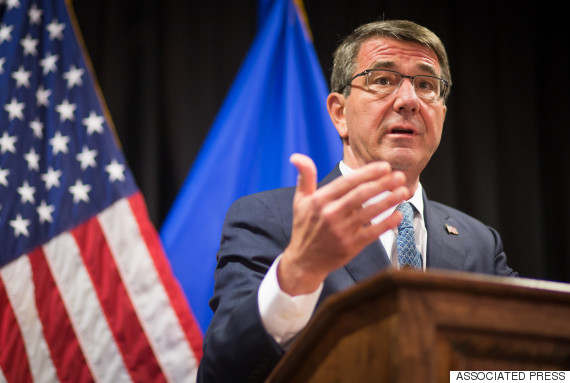 Carter in Germany in January. (Christoph Schmidt/dpa via AP)

The CNAS report states, "[F]rom a resurgent Russia to a rising China that is challenging the rules-based international order to chaos, and the struggle for power in the Middle East, the United States needs a force that can flex across several different mission sets and prevail." The report simply restates in more nuanced language many of ideas that underline the concept of the "American Century" and U.S.-led unipolar world order.

What does this have to do with propagating the meme that the war on ISIS is a disguised sectarian war on Sunni Islam? Well, quite a lot. Consider this from the report (italics mine):

The United States should adopt a comprehensive strategy, employing an appropriate mix of military, economic and diplomatic resources, to undermine and defeat Iran's hegemonic ambitions in the Greater Middle East. Whether in Lebanon, Yemen, Syria or Bahrain, Tehran's advances and longer-term ambitions should be regarded as a threat to stability that it is in the U.S. interest to counter and deter.

The next administration must make abundantly clear that it has no interest in pursuing an off-shore balancing strategy, such as the 'new equilibrium' some have suggested, which envisages a significant U.S. military drawdown from the region. On the contrary, the Persian Gulf should be deemed a region of vital interest to the security of the United States. As such, U.S. military forces in the region should be sufficient to ensure the security of Gulf allies and the Strait of Hormuz against potential Iranian aggression. At the same time, Gulf allies should have access to sufficient defense articles and services to deter Tehran even if U.S. forces are not present or immediately available to assist.

We also reject Iran's attempt to blame others for regional tensions it is aggravating, as well as its public campaign to demonize the government of Saudi Arabia.

The last sentence is truly amazing. So the spread of cultural and militant Wahhabism has nothing to do with tension in the region? Here we see that the crux of the joint neocon, liberal-interventionist foreign policy for the Middle East is to cast Iran as the source of all "regional tensions" and secondly, to hold onto America's Gulf bases -- in order to "flex across several different mission sets and prevail."

Saudi Arabia is mildly rebuked in the CNAS report for having helped radicalize Sunni Islamist groups in the past, but the Kingdom receives applause for its law enforcement and intelligence cooperation. It is very clear from the report's context that a makeover of Saudi Arabia's status as a U.S. ally is underway and that this rehabilitation is seen as integral to aiding America's "hard-nosed enforcement strategy ... to counter Iran's destabilizing activities throughout the region, from its support to terrorist groups like Hezbollah to its efforts to sow instability in the Sunni Arab states."

The old Western standby of using psychologically inflamed Sunni radicalism as a means to weaken opponents seems like it won't be dismantled completely.

Another gloss in the CNAS report is striking: while ISIS as a threat is made much of, and a call is issued to "uproot" it, when it comes to Syria, the report simply states that "it is also essential to assist in the formation of a Sunni alternative to ISIS and the [Syria President Bashar] Assad regime" and to create "a safe space ... where moderate opposition militias can arm, train, and organize." Yet there is no mention of Jabhat al-Nusra, al Qaeda's Syria wing. Its role simply is not addressed.

This conscious lacuna suggests that the authors do not want to embarrass Saudi Arabia for all its fired-up Sunni jihadist tools. The old Western standby of using psychologically inflamed Sunni radicalism as a means to weaken opponents seems like it won't be dismantled completely. It is fine, evidently, to make a hoo-ha about ISIS while Nusra is to be slipped quietly into the Syrian calculus in order to shift the military balance and convince Assad that he cannot remain in power. 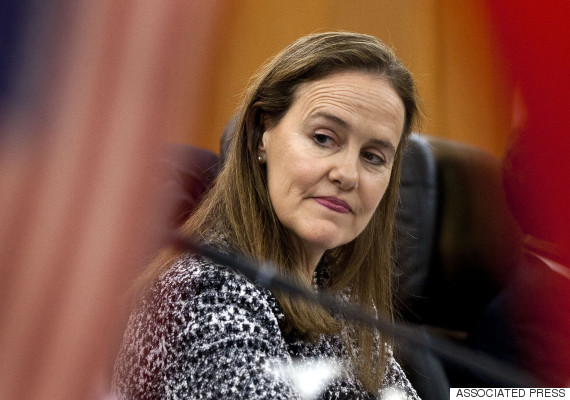 Michele Flournoy, one of the authors of the CNAS report, in Dec. 2011, when she was still the Under Secretary of Defense for Policy. (AP Photo/Andy Wong)

This new/old policy platform is well assisted by broadcasting a narrative that those fighting ISIS on the ground (Iran and its allies) are the "naked sectarians" who compound their sectarian intent by provoking Sunnis to rally to ISIS, their defender. Thus, Iran becomes the threat to regional security, and the CNAS case against Iran is crystalized. This is working quite well, it seems, to judge by its play in the media.

It may be fairly asked however, why these eminent American foreign policy hands should be espousing what many might see as such a retrograde stance. Promoting Saudi Arabia and Gulf states as key U.S. allies would seem to go against the grain of contemporary -- even Congressional -- sentiment. Ditto for maintaining America's necklace of (expensive) military bases around the globe in order to project American military power. Are Americans not tiring of endless war? And has not the arming and training of a Sunni opposition in Syria been tried several times and failed? Why should this policy be any more successful next time around?

ISIS is the consensual scapegoat to be lambasted by all and sundry, but its spirit -- neo-Wahabbism -- is not to be rooted out.

It is not that the report's authors don't grasp these points, but if the neocons have one constancy, it has been their unwavering support for Israel. They think that the Gulf states are ready for a normalization with Israel and wish to do profitable business with it. What stands in the way of this rapprochement, in the neocon view, is Iran, Syria and Hezbollah's vehement opposition -- and their ability to ignite public opinion across the Muslim world on behalf of the Palestinians.

So what is the final takeaway from all this? It is that ISIS is the consensual scapegoat to be lambasted by all and sundry, but its spirit -- neo-Wahabbism -- is not to be rooted out. It is too useful to Saudi Arabia and Turkey and to Western interests -- to weaken Assad, for example, and to contain Iran and fight Hezbollah. 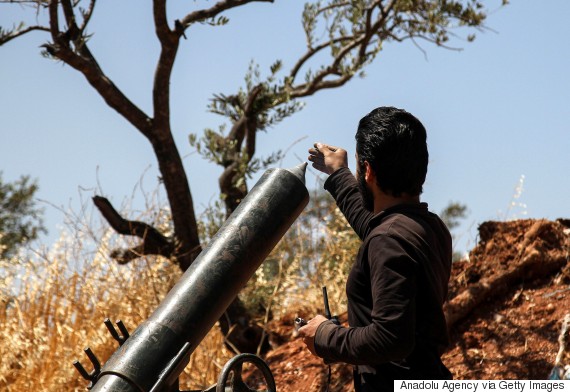 Whether in the form of Nusra or Ahrar al-Sham, another al Qaeda-allied rebel group in Syria, this chameleon-like Sunni jihadist force collectively provides a useful pivot around which neocons and liberal interventionists alike can pursue interventionism and the continuance of "the American Century." It also provides a valuable intersection between Israel and Gulf interests. As Lobe wryly notes, "the authors' undisguised hostility toward Tehran pours forth with specific policy recommendations that, frankly, could have been written as a joint paper submitted by Saudi Arabia and Israel."

Will the report, like the neocon Project for the New American Century, to which it is perhaps conceived as a successor, come to form the basis of American foreign policy if a Democrat won the forthcoming election? Possibly, yes.

But there is also an intangible feeling of something passé in these policy prescriptions, a sense that they belong to a former era. The current presidential campaign, with all its iconoclasm and evidence of widespread popular anger towards the status quo, suggests that such a palpable replay of the past is not tenable.

PHOTO GALLERY
The Syrian Refugee Crisis In Numbers
Download
Calling all HuffPost superfans!
Sign up for membership to become a founding member and help shape HuffPost's next chapter
Join HuffPost
Voting Made Easy
Register to vote and apply for an absentee ballot today
Register now 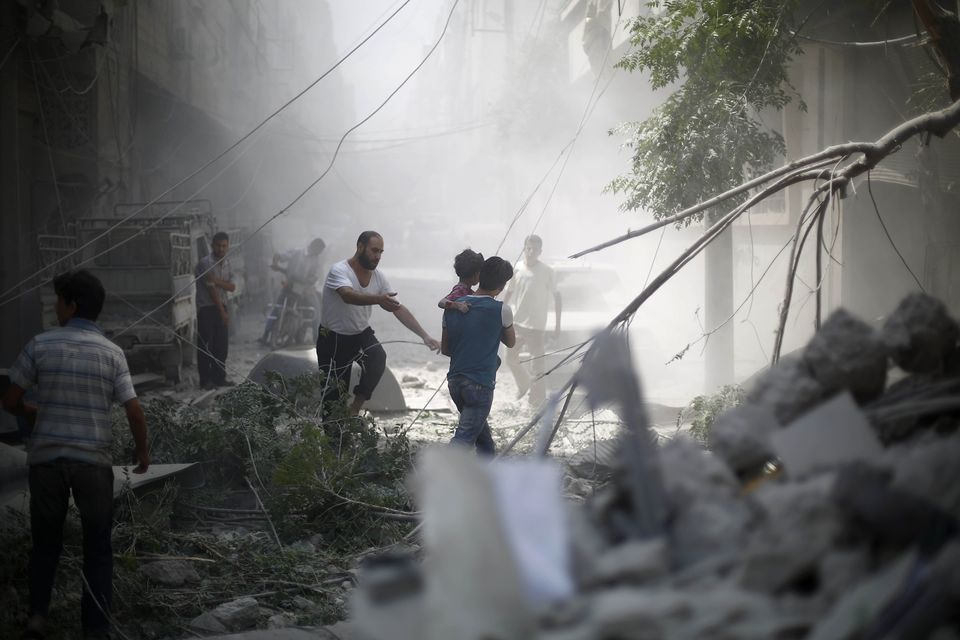