As we remember Muhammad Ali this week, I can't help but think that some of the public men in our midst are anything but fighters or heroes. On the contrary, Paul Ryan and a number of other Republicans are showing themselves to be spineless wimps for backing Donald Trump against their better judgment. At the same time, the women of the Democratic Party are showing themselves to be formidable opponents, exhibiting strength and grit in eloquent, aggressive and pointed attacks on the Republican presidential nominee.

Senator Elizabeth Warren took off the gloves weeks ago - going after Trump in a series of tweets that skewered him personally and professionally. And then at the Massachusetts State Democratic Convention Saturday, she said this:

"Every day there's another piece of evidence that exposes this small, insecure money-grubber who doesn't care about anyone but himself."

So much truth in one sentence.

Hillary Clinton rediscovered her fighting spirit last week, and the results were impressive. She didn't hold back in a speech that pummeled the Republican nominee, one blow after another. 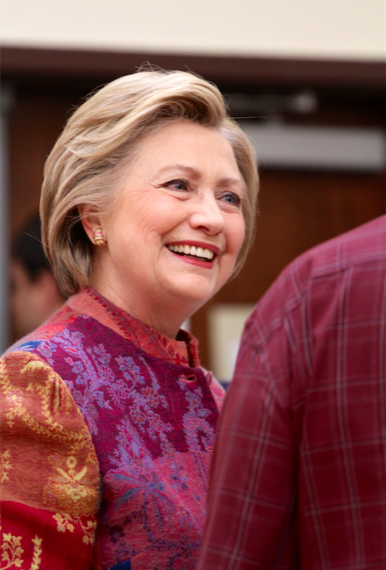 "Donald Trump's ideas aren't just different - they are dangerously incoherent. They're not even really ideas - just a series of bizarre rants, personal feuds, and outright lies."

The hits came in quick succession. CNN counted 34 good ones. Clinton said Trump was "temperamentally unfit" to lead the country, not to mention scary.

"This is not someone who should ever have the nuclear codes because it's not hard to imagine Donald Trump leading us into a war just because somebody got under his very thin skin."

And Trump quickly proved that his skin is paper thin in typical, shallow, lowbrow fashion. It was like witnessing the schoolyard bully trying to keep up with the class valedictorian.

"I watched Hillary today and it was pathetic. It was so sad to watch," Trump said.

No, it's sad to read your Twitter feed, Mr. Trump. "Bad performance by Crooked Hillary Clinton! Reading poorly from the teleprompter! She doesn't even look presidential."

Not if the president is an authoritarian ruler, no. As Hillary said at another speech Friday night, "We are trying to elect a president, not a dictator."

I have seen how leaders rule by intimidation. Leaders who demonize and dehumanize entire groups of people often do so because they have nothing else to offer. And I have seen how places that stifle the voices and dismiss the potential of their citizens are diminished, how they are less vital, less hopeful, less free. Graduates, that is not who we are. That is not what this country stands for. 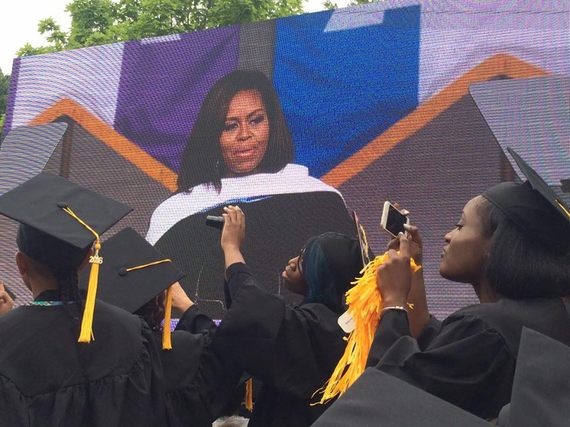 The First Lady never used the name Trump in her commencement speech. But she repeatedly referred to him and said, "In America we don't build walls to keep people out."

Her address came on the heels of Trump's rants about the "Mexican judge" trying the Trump University case and that memorable one-liner: "Oh, look at my African American over here."

The commencement speech was devoted to diversity and its benefits to our country, and Michelle Obama picked the perfect setting for her remarks. City College, in Harlem, is home to students of over 150 nationalities, as the First Lady said, where 100 languages are spoken. As an MFA recipient from City and a former adjunct professor there, I can say that it's City's diversity that makes it a unique environment. Even in a creative writing class I taught, students from a wide variety of backgrounds realized how much common ground they shared in their family lives and dreams - which brought them closer together.

Mrs. Obama reminded students why the country is better off for its diversity, and why it's incumbent on them when they're successful to reach back and help others - to not "pull up the ladder."

I just hope Michelle and Hillary and Elizabeth can keep the punches coming through what promises to be a slog of a campaign. They need not only remind Americans that Trump is incompetent to run the country and handle foreign affairs, that he is a racist xenophobe; but also that he is no friend to women.

I can't help but dream of a Clinton-Warren ticket, and maybe a cabinet post for the First Lady. With such strong, articulate women taking Trump down consistently, the Democrats can win each bout from here until November, and deal a fatal blow to the Republicans in the final round.