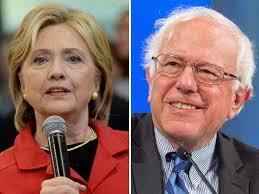 The next Democratic National debate (broadcast on ABC) will take place on Saturday, December 19 in Manchester, New Hampshire. This is the third debate with all three Democratic candidates (Hillary Clinton, Bernie Sanders, and Martin O'Malley), and the last presidential debate for 2015.

According to CNN, Clinton is maintaining her solid lead over Democratic presidential opponent Bernie Sanders in Iowa, according to a new poll out Tuesday. The former secretary of state leads the Vermont senator 51% to 40% in the Democratic caucuses, according to a Quinnipiac poll released Tuesday.

Like a long-shot, dark horse running in the Kentucky Derby, Sanders has to make a big move in this debate to stop Clinton's momentum and overtake her. Pundits have weighed in on what they think will be happening with these candidates. But for a unique political perspective on what to expect at this next debate, it's time to look at the two leading candidates from an astrological perspective. What do their Horoscopes say will be the outcome of this debate?

My colleague, the brilliant political astrologer, Leslie Hale and I, looked at the candidates' horoscopes and have prepared this report for you with a prediction of the winner of this next debate.

With her Scorpio Sun and the aspects made to her Mercury, Hillary is an expert debater, a powerful warrior, a fierce fighter, and always in control on the political battlefield of politics. Hillary is capable of taking a punch and delivering a devastating blow to her opponents, whoever they are. With her Moon in Pisces she can go from appearing tough as nails to projecting a naturally empathetic, compassionate, and sensitive side to her public, which enamors her, especially women.

With the Sun, Venus and Mercury (in Scorpio) falling in her 12th house, we see her great propensity to keep things secret and hidden from others. Her sense of privacy is deeply embedded in her subconscious mind and naturally creates an air of mystery. Hillary will always have hidden enemies and those who wish to see her fail with these placements. She will continue to live a life where she is both justly and unjustly accused.

Her Horoscope brings into play Mars, Pluto and Saturn, ruling action, power and control. This planetary combination makes her an individual who is volatile, powerful, determined and potentially explosive with a showman's edge, someone who can act decisively, and without hesitation. She knows what she wants and goes after it, no holds barred.

The Saturn-Pluto aspect in her Horoscope is often found in politicians who are highly motivated with staying power and great determination. Individuals like her, possess deep, intense, determined personalities, often afraid of losing control and not accomplishing their objective. In Hillary's case, it could cause her to be extremely watchful and even paranoid.

She is someone who wants absolute power and to be in total control all the time. This obsession and intensity gets in the way of her coming across in a warm, intimate way that creates a close connection with voters. It's a big reason why polls show her to be "unlikeable."

Her Leo/Scorpio planets give her powerful tools for accessing people and situations and the challenge will be for her to not let trivial matters distract her, cause her to become cynical in her speech or insert her ego into the equation.

Uranus in Gemini gives her the gift of quick thought (like Bernie Sanders), a futuristic edge, and the gift of being a formidable debater, but lends an unpredictable element to her emotional nature (because it negatively aspects her moon). On the positive side this planetary combination allows her the ability to free herself of past conditioning, ways and ideas that no longer serve her. But Uranus in her chart is unpredictable, so she can change (her positions) at a moment's notice.

Astrologers are at a bit of a disadvantage since Bernie's time of birth has never been published, but nevertheless, a lot can be known using his Sun sign chart. Sanders is a Virgo, the most practical of signs. That's why we can typically expect to hear details and/or facts and perhaps even figures in his speeches. He has an Aries moon that lies next to his Mars, which is a placement that stirs up his emotions giving him a reputation of being a political firebrand.

Mars rules the way he takes action, and because it's next to his Moon, gives him a passionate nature that at times can come across as a temper. As his Mars is retrograde the energy is often internalized and the powerful Mars in Aries energy can be suppressed, and he would generally dislike open confrontations. Sometimes a retrograde Mars can be construed as weak action, but like most people born with a retrograde Mars, his progressed Mars is now direct and at some point in his life he learned to take a more direct approach.

This would give Bernie the ability to fight back and "kick ass," if provoked.

His Venus and Mercury in Libra give him balance and harmony, and the desire to be diplomatic. This part of his Horoscope is why he's not someone who likes to get down and wallow in the mud as some of the other candidates. It also gives him an intellectual, cerebral and quick-witted combination that above all is fair.

Bernie's Venus-Jupiter combination gives him charisma and denotes honesty, compassion and a desire for equitability and justice for all, hence the branding of himself a 'democratic socialist.'

His Jupiter-Sun aspects give him a warm, active, optimistic and social nature. This transit is greatly beneficial for him as a politician because it shows his appreciation for law and order, his desire to act in the best interests of society, while respecting differences of opinion, all the while being conciliatory.

Interestingly, Bernie's Jupiter in Gemini gives him the gift of attracting young people, as well as people of all ages. It also gives him a quick wit and a sharp mind like his impersonation of comedienne Larry David, after David impersonated him on Saturday Night Live.

His Saturn in Taurus makes him grounded and practical as he strives for solid socialistic and economic policies that have proven the test of time (e.g. which is why he often mentions Medicare and Social Security). Saturn makes a wonderful aspect to his Neptune in Virgo, the planet of dreams. This is an important aspect in his Horoscope because it gives him the ability to inspire, and passionately talk about how he can turn dreams into reality. It's the part of his Horoscope that shows his trustworthy nature. Unlike, Hillary, there are no hidden agendas with Bernie: what you see and hear is what you get.

These descriptions give you a sense of their basic personalities based on their birth charts. But each candidate will be affected by astronomic events that uniquely affect them on debate night. Here's how each will be affected.

During the early fall, Neptune and Saturn in Hillary's horoscope made a negative aspect to her midheaven (career), casting doubt upon her trustworthiness and record.

While her twelfth house planets show us she may always be accused of secrecy and secret dealings, the Benghazi hearings became her opportunity to show the world she was someone to contend with. However, as Saturn and Neptune move further away from her career house this should be less of an issue, even though opponents will never stop scrutinizing her.

Venus makes a favorable aspect to Mercury, the planet of communication, on debate day, which will help her give upbeat and positive responses to questions she'll be asked. Look for someone artful "spinning."

Jupiter opposes Hillary's Moon, which should put her in an emotionally positive mood. However, this planetary combination may also cause her to behave arrogantly, over-promise, and come off as excessively optimistic in the way she communicates.

But there is troublesome stress in her chart that could cause her problems on debate night from three planets in her horoscope: Jupiter (excessiveness), the Moon (her emotional nature), and Uranus (the planet of unpredictability and changeability.) She could experience changeability both at the debate, causing her responses to be unpredictable, especially if she is caught unaware.

This debate should have an electric and unpredictable quality as the Moon makes a powerful aspect to Uranus at debate time. Expect some unpredictable twists and turns. As Mercury (communication) impacts Pluto (power), issues discussed will be intense, powerful and even argumentative. Mars (the God of war) strongly impacts Bernie's Venus, which should put him in a fighting spirit. This type of Mars combination can be a double edge sword, because while it bestows high energy, the downside can result in fruitless argument.

Most importantly Pluto (power and transformation) is within days of making an extremely positive aspect to Bernie's Sun, for the first time. This powerful aspect is Sander's only hope to transform him as the front-runner of this presidential race. Pluto-Sun planetary combinations bestow passion, positivity and endurance and endow one with the confidence to move forward in a big way. This favorable astrology often manifests by giving a person strength of purpose, unwavering determination and great strides in accomplishment and typically occurs only once in a lifetime.

It will give Sanders greater assurance as to his purpose and goals and move him through circumstances with fewer obstacles, a strong sense of being right, and giving him the wherewithal to make great gains in his candidacy. This transit often coincides with success, good leadership and opportunities that were previously unavailable.

Which Bernie Sanders Will Show Up?

Sanders can use this powerful astrology on debate night to continue preaching about his desire to radically transform America. Or, he can go one step further, and use the power of Pluto in his horoscope to deliver a knockout blow to Hillary Clinton. He can do this by pointing out her "flip-flopping" on major issues, and pointing out her bad judgment on her past foreign policy decisions (which is her clear strength over him); and, her overall, lack of electability because she's not liked or trusted by the American people.

How Bernie harnesses his positive astrology will dictate whether he makes great strides at this debate and into the New Year or remains in 2nd place. If he's the "same old Bernie," he will lose the debate on December 19. If he shifts to a strategy of aggressive, direct confrontation with Hillary, clearly showing Democratic voters, why she is not the best candidate to win the presidency, and he is - he will win on Saturday night.

Winner of Debate #3: Hillary Clinton (unless Bernie Sanders takes off the gloves and goes for a knockout)

You've just read about the Horoscope of these politicians. Learn how the planets may be affecting you, and whether they may be bringing a relationship into your future - by going to the Free Transit Calculator and entering your birth date. And, if you're curious to learn more about your personal Horoscope and what it says about your love relationships, career, investments and health in: Order your customized Report: Your Horoscope & Future in 2016. Or, a report on - Your Love Compatibility.