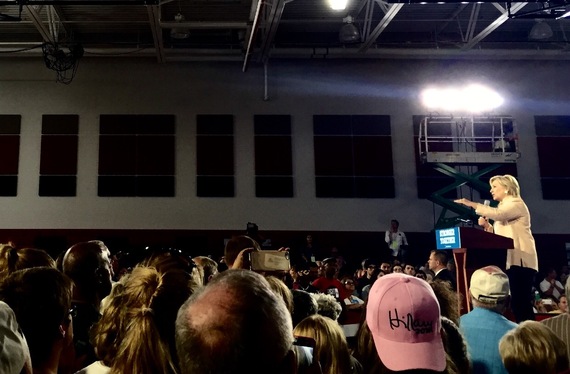 School's back in session. I hadn't realized it until the other day, when I was standing outside of a high school on the West Side of Cleveland, waiting to see Hillary Clinton.

It's a Wednesday afternoon. I had read in the paper that she was supposed to make a campaign stop at a school to give a speech about her tax plan. It's a forty-minute drive from my house. I get caught behind a few yellow school buses on the way. I think it might rain. In Ohio, the summer ends in thunderstorms. The rain falls horizontally and pools into potholes. I park on the street and get in line. The girl behind me calls her friend to tell her about how long it is. It stretched two blocks at most.

I think about the time I walked nearly a mile in line to see Bernie Sanders in Washington Square Park in Manhattan. Staring at the fields through a fence, I might have been waiting to see a high school football game rather than the likely next President of the United States.

I cross through the TSA scanner and enter into the gym of John Marshall High School--home of the Lawyers. On one wall, two American flags frame two Ohio flags, which surround a free floating white "H" with a blue arrow going through it--the icon of 2016 HRC. On the adjacent wall, a large blue sign offers her new campaign slogan--STRONGER TOGETHER. The bleachers below it house two sections of attendees: adult supporters and yawning high school students. I look at the girls seated on the top bleacher leaning against the white concrete wall and see myself from another life. My Homecoming assemblies looked like this, but with more balloons and cardboard magic. I'm about fifty feet from the raised podium.

The crowd is a sea of suburban mothers, fathers, and daughters--many clad in blue to presumably offer support for the Democratic Party, each bearing an entrance sticker with a modified slogan--OHIO TOGETHER.

"Ohio is Clinton country!" he declares. The crowd goes wild, and rightfully so.

You know what they say--As Ohio goes, so goes the nation.

Strickland exits to the resumed roar of the Hillary Clinton "soundtrack for smashing glass ceilings": Taylor Swift's "Shake It Off," Katy Perry's "Roar," and of course--the most fitting song of them all--Sheryl Crow's "Woman in the White House."

I'm brought back to the time I went to a Donald Trump rally in Long Island. How I was struck by the mind-numbing back-to-back upbeat hype of the Americana playlist--the kind of songs that make people want to Make America Great Again, whatever that means.

An older woman next to me taps my shoulder and smiles. She says it seems like in this election, every young person she meets is involved. The opening notes of Marvin Gaye's "Ain't No Mountain High Enough" come on. It's time for the woman of the hour. Cheers. Laughter. The crowd joins in a communal karaoke session and breaks out into cries for HILL-AR-Y. I stand empty of expression--until I see signs of a blonde head. Her blonde head.

I was born in 1997. I've never lived a life without Hillary Clinton in it.

She's real, I think. I see her. She isn't a robot. I stand so close that I can make out the wrinkles surrounding her smile, the contour of her cheekbones, the details embroidered into her rose jacket. She points to the crowd and makes that fake characteristic Hillary grin that the Internet loves to make memes about.

Yet in the flesh, it doesn't look fake. She looks... happy. She looks like a woman who has lived, and lived, and lived--yet here she is. Still standing. I think about the speech Bill Clinton made during the DNC--how he'd seen her in the college library and couldn't build up the nerve to talk to her. I think about a young woman by the name of Hillary Rodham--just about my age, with her funny glasses and long hair.

How much she's fought and fought through to stand on that stage--not as a girl, but as a powerhouse. A force. I would be smiling too. She's a tough woman often reduced to a bitch. "The Bitch," as Michelle Cottle of The Atlantic wrote. Any woman who has ever tried to do Anything knows what that feels like. On that stage I see two people: Hillary Rodham Clinton, the politician, and Hillary Rodham, the girl who did it. It's no excuse or forgiveness for her career shortcomings, but from one woman to another, it meant the world.

Her speech is similar to the ones I've seen on the TV, but it feels different. I know it'll be broadcasted to millions, but on that high school basketball court, she's talking to a small crowd. She tells us a Hillary Clinton presidency for Ohio means 376,000 new jobs. She says that under Trump's tax plan, he alone would save four billion dollars. For Ohio, that could mean the building of 288 new elementary schools. Alleviating 166,000 dollars of outstanding student loans. Providing healthcare to 370,000 veterans, rebuilding every bridge, fixing those pesky Ohio highways.

As for Trump? "If you're waiting for Trump to become responsible," she says, "Remember Maya Angelou. 'When someone shows you who they are--'"

"BELIEVE THEM," the crowd answers.

She reminisces about her grandfather who worked in a lace factory, and how she would come and help him out sometimes. The pragmatic part of me knows this is strategic, but another more human side of me laughs thinking about a child growing up in a house full of lace everything. She says it hurts to think about the workers that Donald Trump doesn't pay--how in another world, that could've been her family getting the cut. I think about my parents. The thought hurts me too.

Though the speech was meant to cover her tax plan, she touches on a lot--focusing on the evils of the pharmaceutical industry, the importance of putting mental health and addiction to the forefront of the national agenda, her promise to fight the gun lobby, and her advocacy for human rights in general.

She wraps up with anxious optimism, and waves goodbye as "Ain't No Mountain High Enough" resumes playing. People clap harder, sing louder, and exit the high school giddy. They buy their twenty dollar t-shirts as if to promise their vote and disperse. I walk down the street, whistling the tune of the song now stuck in my head.

I hear a knock on the door as I pass one of the old houses. A little boy had pressed his face entirely up against the glass screen. He waves to me. I stop to wave back. The air is heavy. It will thunderstorm today. I walk on, thinking of him, and my four-year-old brother, and who their president will be.