Why was it so hard for Hillary Clinton to admit she had pneumonia? To take time off from her campaign to recover? To skip the 9/11 ceremony? I understand she does not want to show weakness, especially because she is the first woman running for President. But I think her decision to take her medicine and soldier on is also a reflection of the American attitude toward taking time off from work to deal with illness or crises, both personal and familial.

By now, many of you have seen this photo that went viral: 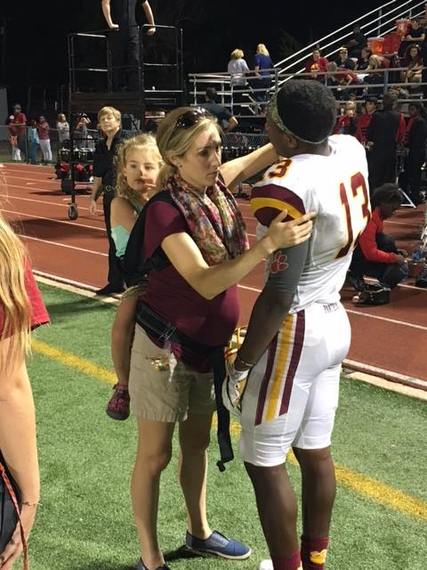 Dr. Megan Meier posted it on a Facebook page for physician moms, captioning it, "This is what happens when you are 35 weeks pregnant, husband leaves town for the weekend, childcare for 3yo falls through, and you have a game to cover!"

Yes, this is what working women do everyday. If they are sick, if their kids or partners or parents are sick, if there is a personal emergency ... somehow they figure out a way to keep going. And we admire them for this. We Americans are tough, hard-working folks.

We work longer and harder than people in most other developed countries. We have less paid vacation leave, and we often don't take all of it. We stand alone as a first world country that does not offer paid sick or maternity leave.

Ironically, Hillary Clinton, along with President Obama and Senator Bernie Sanders, has been advocating for stronger paid leave policies. The President highlighted this problem in his State of the Union address, and none of these folks were exaggerating about the problem.

An NPR essay Lots Of Other Countries Mandate Paid Leave. Why Not The U.S.? explains the dilemma for American workers. According to statistics complied by the Organization for Economic Co-operation and Development (OECD), including Australia, Japan, Austria, South Korea, Belgium, Mexico, Netherlands, Chile, New Zealand, Czech Republic, Norway, Denmark, Poland, Estonia, Portugal, Slovakia, France, Germany, Sweden, Greece, Switzerland, Hungary, Iceland, United Kingdom, Israel, Italy, and United States, we have the following distinction: We are the only country that doesn't mandate paid maternity leave, and one of nine OECD countries that have no leave policies in place for fathers.

Basically, we live in a country that doesn't mandate paid vacations or paid leave of any type for its workers. No matter the crisis or illness, we are expected to show up. The pressure for women to prove they are tough enough to compete in this environment is enormous.

When I was a kid, there was no worry about any of us being sick. My mother was there to bring us trays of nourishing food and tend to our illnesses. When I had kids, I was lucky to be able to do the same thing when they were young. Even when I entered the workforce again, it was in the field of early childhood education. This was a very understanding work environment for needing days off, both for sickness and personal reasons, and some of them were even paid.

But fast-forward to today and you see things like Dr. Meier being applauded for coming to work hugely pregnant with a three-year-old strapped to her back. Or my daughter returning to work as a vet eight weeks after delivering her third child by C-section because, while she had 12 weeks maternity leave according to the Family Leave Act, they were unpaid weeks and she couldn't afford to go that many weeks without income.

In this context, there would not have been a ton of sympathy for Hillary taking the time off to recover from pneumonia. She would have been berated as weak. But I wish she had. Not just for her sake but also as a role model for all of the strong women who think taking care of themselves, their loved ones, or their personal crises can't be done. I wish she had used her illness to give the message that anyone can become ill or suffer a medical or personal crisis in her family. And that folks deserve paid leave to take care of themselves and their loved ones.