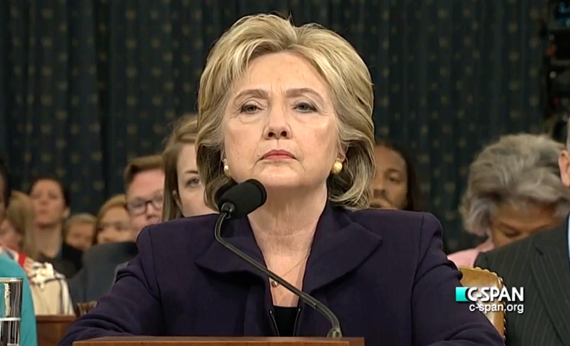 I am not happy with Hillary Clinton, and I'm not sweeping it under the rug. Like so many, I don't trust her on many levels, even though I want to. The latest FBI conclusions about her emails sent me reeling. Not only was she careless, but she lied, and that's a fact. That, coupled with frequent reports about some impropriety about the Clinton Foundation, money and favors, puts me in the "I don't trust Hillary Clinton" camp. And worse, I don't trust her political positions. She blows with the wind.

And even worse than all that, it appears to me that the Democratic Party expects me and others to ignore it all for the sake of defeating Donald Trump. Well, I get it. We can't afford to have Trump in the White House, but I'm feeling something akin to the anguish of so many Republicans now. Should I swallow my distress about the presumptive nominee for the sake of the Party? How dirty can politics get?

So my distress is not just about Hillary. It's about the response of the Democratic Party. Where's the "Free the Delegates" movement for the Democrats? Where's the soul-searching on the part of the Party establishment? Where's the insurgence by Democrats and Independents who want to trust in the integrity of the presumptive nominee, but can't? When are we going to hear from John Lewis, or Jimmy Carter, or Elizabeth Warren or Barack Obama directly addressing the trustworthiness of Hillary Clinton and the corruption of the political system that promotes this kind of candidate? And beyond all that, how much is Hillary a product of the political system, rather than the creator of it, and how much is our political system a reflection of the ego-based, me-based universe that we all live in and somehow have to navigate?

When it comes to Hillary or any other Democrat, I want to believe that the Republican attack dogs are always making something out of nothing, but I can't, because that's not always true. I don't pretend to understand Hillary Clinton. I want to believe she has a good heart and means well. And I can't imagine the impact on her of years of politically-based attacks and the toll that has taken on her. But I have to admit that the FBI report only reinforces what I started feeling about Hillary during her primary run against Obama in 2008 - that this is a woman who is politically motivated first and principled second. And I am appalled by the continuing stories of the shenanigans of the Clinton Foundation and the money for favors that seems to be rife in their world. And I'm distressed by the dissembling and secrecy Hillary demonstrates, and I can't accept that it's all a defense against those dreaded Republicans.

I'm sick of damage control. I want to hear the Democratic Party - and not just Bernie Sanders - start to address these issues. And I want to hear from the rank and file. I want to see a groundswell against politics as usual, perhaps even a Free the Delegates-Draft Bernie or someone else movement. I want to believe that this mess is going to be a call to consciousness, that we are done with this kind of politicking and that we are ready to be honest, transparent and real.

A lot can be forgiven when amends are made. But the Democrats are not making amends. A lot can be learned, if we get honest about ourselves, our weaknesses and our need for mutual support. And I'm not seeing that either.

Now I really understand how it feels to be a Republican in 2016, and I don't feel smug anymore. We are all pushed to the wall, feeling that we have to choose between losing an election and losing our integrity. I know what's at stake in this election, but I also know what's at stake in our world, how corruption and cover-up are just the tip of the iceberg of how power is brokered in our society. And it's time for us all to be held to a higher standard of honesty, accountability and caring, not just our public servants. Our political system reflects us, and we have to look at that.

I want to believe that we the people are not going to be left with all these negative feelings roiling within us, and that our representatives are going to start telling the truth. But when I woke up this morning looking for a real discussion in the news, I found politics as usual--Democrats trying to sweep Hillary's trust issue under the rug or trying to do damage control, rather than addressing the problem, and Republicans jumping up and down with glee trying to take advantage of the exposé of their political enemy, while trying to deflect from the nightmare of their own candidate.

It's all rather sickening, isn't it? But we don't have to shut up and accept it, do we?

Beth Green is founder of TheInnerRevolution.Org, host of Inner Revolutionary Radio on VoiceAmerica.com and creator of Beth Green TV & Radio on YouTube. You can download a free version of Beth's book "Living with Reality" at www.theinnerrevolution.org. And follow us on Facebook and Twitter where we're building an online community of people who are fighting for a revolution toward Oneness, Accountability and Mutual Support.