I received an email today from a black elder asking me to reprint a column I wrote for an African American newspaper in April of 2008 detailing the persistent racism in the Clinton campaign as it tried to derail Barack Obama's historic run for the American presidency. She wanted me to "remind the American people of how far the Clintons had stooped" a mere eight years ago. I am reproducing the column below, following Sunday night's presidential debate, in which Hillary Clinton clung to the Obama mantle despite her -- and her husband's -- racist dog whistling against Obama in 2008. 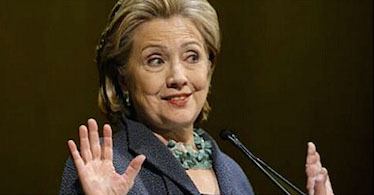 New York City, NY -- In the aftermath of the Pennsylvania Democratic primary [won narrowly by Hillary Clinton] -- a race in which Clinton had a 20-point lead only a few months ago -- the racism and hypocrisy of the Clinton campaign were laid bare for all a nation to scorn.

Desperate and willing to do anything to win, the Clintons resorted to a naked form of racism aimed directly at white working-class voters in the rural portions of the state. Their message: Barack Obama cannot win because he's black.

In the early stages of the campaign, it was Clinton's cadre who kept playing the race card. In New Hampshire, Clinton's co-chair, Billy Shaheen, accused Obama of being a drug dealer; then there was the photograph of Sen. Barack Obama in Somali garb leaked to the press by Clinton's staff.

In the aftermath of the South Carolina primary, former President Bill Clinton compared Obama's victory to those of Jesse Jackson in 1984 and 1988. His message was clear: Obama was a marginal, black candidate.

Then came the disgraceful remarks of Geraldine Ferraro, who could not, and would not, shut her mouth. "If Obama was a white man," she charged, "he would not be in this position." And she was adamant and unapologetic amid the resulting outcry. "Every time that campaign is upset about something, they call it racist," she proclaimed. "I will not be discriminated against because I'm white."

The Clintons refused to publicly call for Ferraro's resignation. Ferraro remained unrepentant when she finally did resign. "The Obama campaign is attacking me to hurt you," she bitterly wrote Hillary. And she never apologized for her remarks.

To anyone who has followed the Clinton campaign closely, it is all too apparent that her top political strategists -- reeling from losses from coast to coast and badly miscalculating the grassroots power of the Obama movement -- made a tactical decision to go negative, as that would be the only way for Clinton to stop Obama and somehow allow her to steal the nomination.

And go negative they did -- with a subtle yet consistent racism underscoring every turn. The now notorious red-phone-at-3:00-a.m. television ad used by Clinton during the Texas primary, as Harvard sociologist Orlando Patterson noted in the New York Times, was reminiscent of D. W. Griffith's racist film Birth of a Nation, which helped revive the Ku Klux Klan.

In Pennsylvania, Gov. Ed Rendell, who headed up Clinton's campaign, was publicly saying that white voters in the Keystone State would not vote for Obama because he was black. Rendell's remarks were racist from the get-go, but no one in the white media called him on it. Indeed, the media began playing the game.

ABC's George Stephanopoulos -- who worked as Bill Clinton's press secretary and lied through his teeth on Clinton's behalf (where's the journalistic "objectivity" here?) -- brought up Obama's relationship to former '60s radical Bill Ayers. And the rest of the media went bonkers over Obama's all-too-honest remarks about conservative white voters hanging on to God and guns.

Amidst so much fury signifying nothing, Hillary Clinton finally did her own bidding. Racism is as racism does. She boldly linked Obama with Reverend Jeremiah Wright, and Wright with Nation of Islam leader Louis Farrakhan. That linkage was patently racist at its core -- yet, once again, no one in the mainstream media so much as blinked. In so doing, Clinton was echoing the views of Fox News' resident racist Sean Hannity. Talk about shameful.

As anyone who has read the two major recent biographies of Hillary Clinton (Her Way: The Hopes and Ambitions of Hillary Rodham Clinton, by Jeff Gerth and Don Van Natta Jr.; and A Woman in Charge: The Life of Hillary Rodham Clinton by Pulitzer-prize-winning journalist Carl Bernstein) knows all too well, she will do whatever she has to do and say whatever she has to say in the unbridled (and unscrupulous) pursuit of power. The ash heap of her duplicity sprawls across decades and across various regions of this country -- from Arkansas to the White House, from Illinois to, well, now, Pennsylvania.

Clinton is an inveterate liar -- I am sorry, there is truly no other word for it -- and as her ill-fated presidential campaign tumbles toward its inevitable demise, the personal deception that is at the core of her personality, and of her career, continues to reveal itself.

As we all know, truth may be slow of foot, but it is always inevitable. Only this past weekend, as Clinton continued to reference Reverend Wright in her stump speeches, the filmmaker Michael Moore reminded us that in 1998, Reverend Wright had actually been a guest at the Clinton White House, for a "prayer breakfast," after Bill Clinton's rather tawdry affair with intern Monica Lewinsky had been made public.

"Thank you so much for your kind message," Clinton wrote Wright after his visit. "I am touched by your prayers and by the many expressions of encouragement and support I have received from friends across our country. You have my best wishes."

And guess what? According to the just released schedules of Hillary Clinton by the National Archives, she was in attendance at that breakfast, too. With the one-and-only Jeremiah Wright. While her husband was seeking salvation and forgiveness.

The hypocrisy is staggering.

But not surprising. "We know there are still many Americans who will never vote for a black man," Moore observed. "Hillary knows it, too. She's counting on it."