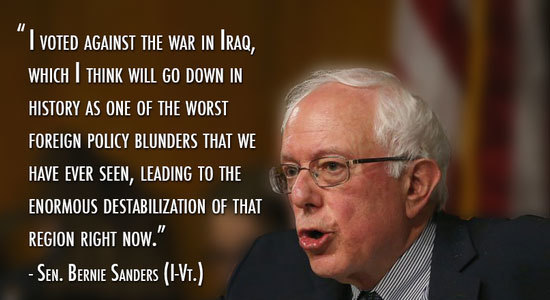 Hillary Clinton voted to authorize George W. Bush to go to war in Iraq. As a result of that war, tens of thousands of Americans and Iraqis died needlessly, trillions of dollars were added to the debt, and the Middle East was destabilized in a way that led to the rise of ISIS, the Syrian Civil War, and the European refugee crisis now threatening to unravel the European Union.


"I have not heard any estimates of how many young American men and women might die in such a war, or how many tens of thousands of women and children in Iraq might also be killed. As a caring nation, we should do everything we can to prevent the horrible suffering war will cause. War must be the last recourse.....[And] who will govern Iraq when Saddam Hussein is removed? And what role will the US play in an ensuing civil war that will develop in that country? Will moderate governments in the region who have large Islamic fundamentalist populations be overthrown and replaced by extremists?"


Bernie was right: The Iraq War was one of the worst foreign policy blunders in American history.

And Hillary Clinton shares the blame.

Hillary may have foreign policy experience, but when push came to shove, she showed an extreme lack of judgment on the most important foreign policy decision in a generation. As in 2008 when she was running against Obama, it casts serious doubt on whether she's the Democrats' best presidential nominee.

Hillary voted for the Iraq War either out of rank political opportunism, because as a prospective presidential candidate, she feared that an anti-war vote would make her look weak. If so, she voted to send thousands to their deaths to further her political career.

Or she voted for the war out of a sincere belief in the benefits of American military intervention in the Middle East and the good that could come from regime change. If so, her beliefs showed an extreme lack of foreign policy judgment.

I'm not sure which is worse: voting for a needless and destructive war out of political opportunism or out of poor judgment. In either event, the Iraq War vote remains a big black mark on Hillary's claim that her foreign policy experience makes her the best choice to be Commander in Chief on Day 1.

Hillary has now apologized for her Iraq War vote. But even her apology feels more like political calculation than genuine contrition. A meaningful apology would be directed to the Iraq war vets and Iraqi civilians who lost life or limb, to the American taxpayer for wasting over a trillion dollars, and to the rest of the world for making it less safe.

Hillary Clinton lost the 2008 Democratic nomination to Barack Obama in large part because of her Iraq vote so she must now try to immunize herself with her weak apology in the hopes that 8 years later, Democratic caucus and primary voters have short memories.

Moreover, none of her apologies give any indication of what she learned from her supposedly mistaken vote. Has she learned that using American military power to instigate regime change in the Middle East leads more often than not to chaos, anarchy, increased terrorist threats, refugee crises, and even the destabilization of Europe?

As Secretary of State, she supported American air power to overthrow the Ghadaffi dictatorship in Libya which has led to anarchy, a new base for ISIS and other extremist jihadist groups, and a refugee crisis.

Secretary of State Clinton supported the overthrow of the oppressive Assad regime in Syria, an effort which has led to a civil war in which hundreds of thousands have been killed, millions turned into refugees, a political crisis in Europe, and the rise of ISIS.

Secretary Clinton supported arming so-called Syrian moderates in the effort to overthrow Assad, despite there being few genuine Syrian moderates not affiliated with one brand or another of Jihadi extremism; and the predictable result has been that many of the American arms have fallen into the hands of ISIS and its ilk.

Now she calls for a no-fly zone in Syria, an idea that has been rejected by President Obama and that the Chairman of the Joint Chiefs of Staff says would require 70,000 troops to enforce. She has not explained what the US would do if Russia violated her proposed no-fly zone. Shooting down Russian planes could lead to World War III, while ignoring Russian violations would just make America look weak and Putin strong.

In short, despite her apologies, Hillary Clinton appears to have learned little from her disastrous vote for the Iraq War. She remains a foreign policy hawk who continues to back discredited policies of regime change in the Middle East.

Bernie was not only right and Hillary wrong about the biggest foreign policy decision of the 21st Century. Bernie had the vision to predict the disastrous consequences of the Iraq invasion that Hillary supported.

After 25 years in the House and Senate, including serving as Chair of the Senate Veterans Affair Committee, Bernie Sanders has as much, or more, foreign policy experience than many recent Presidents before taking office, including John F. Kennedy, Jimmy Carter, Ronald Reagan, Bill Clinton, George W. Bush, and Barack Obama.

In 2008, Democratic caucus and primary voters rejected the "experienced" Hillary Clinton in favor of Barack Obama, in large part because of Hillary's hawkishness generally and her support of the Iraq War specifically. The same reasons should lead them to reject her again and vote for Bernie Sanders in the contest for the 2016 Democratic nomination.