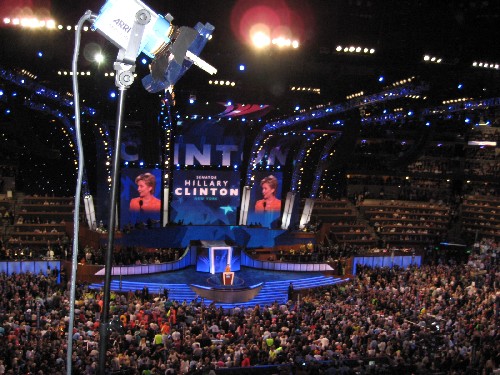 Standing on center stage, Hillary Clinton was as relaxed, composed and so completely in her element, all notions of the media concocted dramafest disappeared. All rumors about how she wanted to sabotage Barack evaporated. She was so good the primary battle Barack and she waged seemed to completely recede in the rear view mirror.

The talking heads doubted she'd do it.

The Hillary haters doubted she would do it.

The anti Clintonites doubted she could do it.

But boy did she do it.

When she started speaking, the energy in the hall just kept on rising until you thought the roof would blow clean off.

"Whether you voted for me, or voted for Barack, the time is now to unite as a single party with a single purpose," Mrs. Clinton said, beaming as the convention hall burst into applause. "And you haven't worked so hard over the last 18 months, or endured the last eight years, to suffer through more failed leadership."

Last night, I had the best seat in the house, as the photo above illustrates. In between interviews, and thanks to NBC, and Al Jazeera English.

Contrary to the clamor be that the Clintons are finished, Hillary delivered a speech of overwhelming power by someone in the full grips of her strength to an audience that returned her emotion, enthusiasm and passion for a woman who has changed the course of presidential politics forever. Not only are there 18 million cracks in the commander in chief ceiling, she's got her name on every single one of them.

So, let every commentator, writer and blogger who finds a crevice in which to slither forth and spew a doubting word on what Hillary said and meant, or should have done, last night finally be called by their proper name: sorcerers. Spiteful vipers who dare to find a toxic blend amidst an open heart and full throated generosity at a time when our country needed just a leader like Hillary to make a new path where the last footsteps have been taken down a road that has ended in the dirt.

Only Hillary Clinton could unite the party behind Barack Obama. She did it last night.

Oh, there will be those few stragglers consigned to crying in their spring soup long soured. But after Hillary's emphatic plea, no one will care about their grievances, gripes or groans, because we've been called on a mission bigger than ourselves, for country, with a single purpose.

She is a woman who made me so proud that last night her words flew past my ears, reached into my heart and got stuck in my throat.

Hillary Clinton's power rises, not falls, reaching new heights through what she offered through her voice last night, and is accompanied with 18 million voters standing beside her as we ready the next journey on this incredible historic ride we've been on for so long now. Electing Barack Obama and Joe Biden to the highest offices in this land and restore the country's name and legacy that has been sullied over the last 8 years.

To all you who doubted, let me finally shout I told you so. I knew she would. I never doubted she could. Hillary Clinton is not just some politician, even though so many want to drag her down to their mediocrity. She is a leader. I will follow her anywhere.

Taylor Marsh is a political analyst who's been seen on CNN and MSNBC, talk radio personality, and author. She'll be twittering the convention all week.