Really, the election, should it come down to Hillary-> Clinton against Donald Drumpf, ought to be a cakewalk for the Democratic nominee. Just listen to the guy. He's a moron, a clown, an orange-faced micro-digital anthropomorphic internet comments section.

So the fact that so many Hillary-> supporters are hurling tomatoes at me for my #BernieorBust stance is quite telling.

They're actually afraid they could lose that match up. What does that say for their candidate? 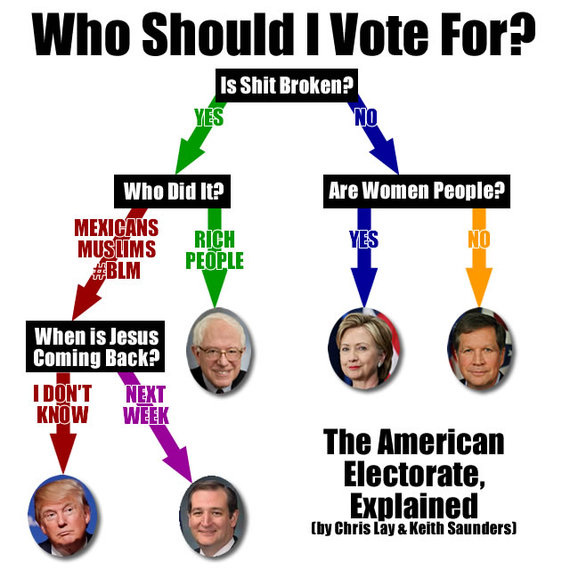 Hillary->'s supporters can read the polls as well as I can. Both she and Bernie are beating Drumpf by double digits, although Bernie's numbers are more in the landslide range than hers.

Bernie beats Cruz by a greater margin than Hillary-> does as well. But Bernie beats Kasich by four points while Hillary-> loses by four. Clearly, Bernie Sanders is the more electable candidate in the 2016 election.

They can also see the most recent poll showing Bernie has erased Hillary->'s lead nationwide, with a 49 percent to 48 percent lead.

But Politifact said that was False! I'm sure some are yelling. Yeah, back in January, when the most recent poll from NBC/WSJ agreed in January that Bernie was the better candidate against the GOP, but the polls prior to that in 2015 did not.

Then USA Today agreed in February and CNN agreed in March. Interesting how as more people have heard more about Bernie Sanders in a series of debates and arena after arena packed with people who've waited for hours in miles-long lines, the better the polling gets for him and the worse it gets for Hillary->, huh?

Here's a sampling of the haterade in my inbox, from a man named Mark P in San Diego:

So, you are part of that ignorant, childish, 'if I can't get my way then scew all of you', voting class it seems.

So, you really want a Republican president then, right dude?

You want to f#$! the country because your poor little Bernie won't be the nominee - right dude?

You and those that think like you better wake up and smell the organic coffee. Because, with your attitude you will guarantee a Replublican in the White House come January 2017.

So, kiss the AFC goodbye. Kiss the Supreme Court goodbye. And whatever you can think of that a Replubican president with a potentially Repubilcan controlled Congress will do.

How low and petty and stupid you and your fellow selfish voters are! Poor little children who will stomp your feet and cry your tears. And take the rest of us down the shit hole with you.

My best regards to you in the hopes you will wake up and get your act together.

PS When I am forced to move to Canada or wherever should a Democratic not be in the White House come January, I will send all my moving bills to you!

Well, Mark, thanks for reading my work and taking the time to reply, It's always fun to hear from people interested in a lively dialogue.

I used to subscribe to that line of thinking you seem to be presenting. Fear-based arguments to submit to voting for a Democrat because the alternative of a Republican is going to bring about the Apocalypse.

There is some validity to that point. Richard Nixon brought us the War on Drugs. Ronald Reagan destroyed labor unions and negotiated with terrorists. George W. Bush ruined just about everything he touched.

But then I evaluate what the oligarchs got out of Democrats I chose because they were a lesser evil. Bill Clinton allowed Big Media to consolidate, destroyed labor with NAFTA, ramped up the drug war and created mass incarceration, and repealed most of the Depression-era banking laws. Barack Obama allowed torturers and banksters to go free, ramped up drone warfare and warantless spying, and gave up on universal health care in favor of a plan that forces people to be clients of a private health care industry that's fleecing the American people.

And then I re-evaluate some of those Republicans. Richard Nixon created the EPA. Ronald Reagan granted amnesty to illegals and raised taxes. George W. Bush did more to combat AIDS in Africa than any other president.

I believe where you and I differ most is in evaluating what the greatest threat to our democracy is. I feel the oligarchic control of our political process is that number one threat, and Hillary Clinton is just the latest Democrat to be a servant of that system. She may be a preferable bribe taker to the Republican options, but when nobody in the 99% can pay any bribes, what difference does it make?

Don't blame me if Hillary can't beat the worst crop of GOP contenders in my lifetime. Blame the Democratic National Committee for coronating Hillary before the first votes were cast and sandbagging any sort of debate coverage. Blame the Democratic Party for nominating a neoconservative poll-watching war hawk bought and paid for by Goldman Sachs.

Voting lesser of two evils acknowledges that both candidates are on the same team, and that evil is the corrupt nature of our politics. Giving votes to Democrats as default gives them no incentive to ever move leftward to collect my vote -- they can keep behaving indisinguishably from Republicans on foreign policy and business issues so long as they're better on women's, LGBT, and minority issues.

Your fellow American (for now),

P.S. If you actually carry out your threat to move to Canada, please send me a self-addressed stamped envelope from your new address. While I won't cover the moving costs of an American who abandons his citizenship, I will send you a happy housewarming card. It's quite amusing that you'd criticize me as a petulant child who'll "stomp my feet" but you're ready to give up on America if you lose the election.

P.P.P.S. Since I love the Green Bay Packers, I'm not too concerned if the AFC goes away. It would be a problem for your San Diego Chargers, though.

Host of The Marijuana Agenda on YouTube, a live weekday news/talk program all about cannabis. Learn more at MJAgenda.com.