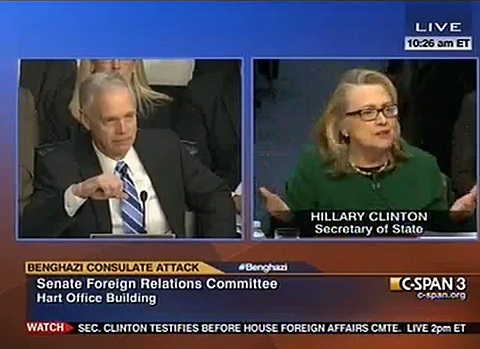 The right wing, which has been trying to push a Benghazi "scandal" since before Mitt Romney blew the 2012 election, has concentrated on one phrase Hillary Clinton said during her five-hour congressional testimony. And it's a phrase they are sure to pound into the ground between now and 2016. Hostilely questioned by Wisconsin Senator Ron Johnson, who was desperately trying to nail Secretary Clinton to the wall, the once-and-possible-future presidential candidate was putting events in perspective. As with any developing story, events are fluid, and information comes out slowly, and it was reasonable to believe that protests in reaction to a video sparked the tragedy that led to the deaths of four Americans.

And that's because, just hours earlier, the U.S. Embassy in Cairo was set on fire by militant Islamists offended by the video. Johnson kept badgering Clinton with leading questions, desperately trying to get her to acknowledge that there was no such protest in Benghazi and thus the video had nothing to do with the consulate attack there. The Secretary believed that, at that point, it was more important to focus on who was responsible and to bring them to justice and to take steps to protect our embassies and consultes, rather than to obsess about a video. Here is the transcript from the January 23, 2013 hearing:

Johnson: Thank you, Mr. Chairman and Madam Secretary. I'd like to join my colleagues in thanking you for your service sincerely, and also appreciate the fact that you're here testifying and glad that you're looking in good health.

Clinton: I was aware of the ones that were brought to my attention. They were part of our ongoing discussion about the deteriorating threat environment in eastern Libya. We certainly were very conscious of them. I was assured by our security professionals that repairs were under way, additional security upgrades had taken place.

Johnson: Thank you. Did you see personally the cable on -- I believe it was August 12th -- specifically asking for, basically, reinforcements for the security detail that was going to be evacuating or leaving in August? Did you see that personally?

Johnson: OK. When you read the ARB, it strikes me as how certain the people were that the attacks started at 9:40 Benghazi time. When was the first time you spoke to -- or have you ever spoken to -- the returnees, the evacuees? Did you personally speak to those folks?

Clinton: I've spoken to one of them, but I waited until after the ARB had done its investigation because I did not want there to be anybody raising any issue that I had spoken to anyone before the ARB conducted its investigation.

Johnson: How many people were evacuated from Libya?

Clinton: Well, the numbers are a little bit hard to pin down because of our other friends -
Johnson: Approximately?

Johnson: Did anybody in the State Department talk to those folks very shortly afterwards?

Clinton: There was discussion going on afterwards, but once the investigation started, the FBI spoke to them before we spoke to them, and so other than our people in Tripoli -- which, I think you're talking about Washington, right?

Johnson: The point I'm making is, a very simple phone call to these individuals, I think, would've ascertained immediately that there was no protest prior to this. This attack started at 9:40 p.m. Benghazi time and it was an assault. I appreciate the fact that you called it an assault. But I'm going back to then-Ambassador [Susan] Rice five days later going on the Sunday shows and, what I would say, is purposefully misleading the American public. Why wasn't that known? And again, I appreciate the fact that the transparency of this hearing, but why weren't we transparent to that point in time?

Clinton: Well, first of all, Senator, I would say that once the assault happened, and once we got our people rescued and out, our most immediate concern was, number one, taking care of their injuries. As I said, I still have a DS [Diplomatic Security] agent at Walter Reed seriously injured -- getting them into Frankfurt, Ramstein to get taken care of, the FBI going over immediately to start talking to them. We did not think it was appropriate for us to talk to them before the FBI conducted their interviews. And we did not -- I think this is accurate, sir -- I certainly did not know of any reports that contradicted the IC [Intelligence Community] talking points at the time that Ambassador Rice went on the TV shows. And you know I just want to say that people have accused Ambassador Rice and the administration of misleading Americans. I can say trying to be in the middle of this and understanding what was going on, nothing could be further from the truth. Was information developing? Was the situation fluid? Would we reach conclusions later that weren't reached initially? And I appreciate the -

Johnson: But, Madame Secretary, do you disagree with me that a simple phone call to those evacuees to determine what happened wouldn't have ascertained immediately that there was no protest? That was a piece of information that could have been easily, easily obtained?

Johnson: Within hours, if not days?

Clinton: Senator, you know, when you're in these positions, the last thing you want to do is interfere with any other process going on, number one--

Clinton: Well, no, it's the fact. Number two, I would recommend highly you read both what the ARB said about it and the classified ARB because, even today, there are questions being raised. Now, we have no doubt they were terrorists, they were militants, they attacked us, they killed our people. But what was going on and why they were doing what they were doing is still unknown -

Clinton: With all due respect, the fact is we had four dead Americans. Was it because of a protest or was it because of guys out for a walk one night who decided that they'd they go kill some Americans? What difference at this point does it make? It is our job to figure out what happened and do everything we can to prevent it from ever happening again, Senator. Now, honestly, I will do my best to answer your questions about this, but the fact is that people were trying in real time to get to the best information. The IC has a process, I understand, going with the other committees to explain how these talking points came out. But you know, to be clear, it is, from my perspective, less important today looking backwards as to why these militants decided they did it than to find them and bring them to justice, and then maybe we'll figure out what was going on in the meantime.

Notice she said "at this point." In other words, we can do analysis later about whether it was a video sparking outrage or a planned attack by terrorists. And let's not forget she did say "we have no doubt they were terrorists." The priority was to understand what happened and to make sure this kind of tragedy could be prevented in the future. You will hear the phrase "what difference does it make" until it's coming out of your ears. And you will hear it with no context by those playing a devilish political game to try to prevent Democrats from retaining the White House.