While working on Return to the Rivers, our upcoming Himalayan cookbook from Lake Isle Press, Vikas came across this story tucked away among his Sheela Aunty's old treasured recipes. It contains a legend about the roth pooja, which is a form of worship, and one of the sacred foods associated with religious observation among Hindus. We found a strikingly similar story rendered by Satish Raina as we were researching for this book and don't know which is closest to the original. It is probably an ancient Hindu legend that has evolved with different details over the centuries. There are many types of pooja, not all of which involve food, and these cookies are just one of them. In brief, pooja is the ritual and the offering is called the prasad. These foods are consecrated and dedicated to one of the gods as an offering and display of good intentions. Making good pooja invites the presence of the deities and makes the attainment of one's goals more likely. In this story, the Devis referred to are female deities.

The Legend of the Roth Pooja:

More years ago than you could count, there lived a Brahmin family that consisted of a husband, his wife and their beautiful daughter. They were very poor and the husband fed the family by begging alms while the daughter collected firewood from the forest. But on the fourth day of the month of Bhadoon Shakula Paksh, the girl saw something miraculous. A group of Devis descending from the heavens! She was very curious to know what they were going to do so she hid herself behind a tree to watch.

First the Devis set aside an area which they cleaned up thoroughly and then they began making the roth by kneading together flour, ghee, sugar and cardamom and then they baked them on a hot plate. They searched around for they could not complete their pooja without a girl. Seeing her hidden behind a tree, they brought her out, bathed her and gave her a new dress to wear. After completing the pooja, they gave her the prasad of the roth and some money as dakshina. Once this was done, the Devis left and returned to their place in the heavens. Upon returning home the girl was dismayed to find that her story about the Devis was not believed at all by her parents. They beat her for being a thief even though she protested her innocence. Days, weeks and months passed as her life returned to its usual state of misery and poverty.

On the same day of the following year, the Brahmin girl was determined to repeat the ceremony as she had seen it done by the Devis. Having no money to purchase the ingredients, she collected cow dung and separated the undigested wheat which she ground into flour. She had no ghee or sugar, of course, so had to make do with water. Just as she had seen the Devis do, she cleaned the area of the previous year's celebration and baked her poor roth cakes on the hot rocks.

The Devis were so pleased by her demonstration of faith that they decided to reward her. After she had covered her cakes with a cloth and completed her meager pooja, she removed the cloth covering and was astonished to find that her cakes had been turned into gold. She offered thanks to the Devis and ran home to share the good fortune with her parents. But as before, they did not believe her and assumed she had committed some even greater crime this time. She was vigorously punished and sent to bed wailing.

The Devis, seeing that injustice was being done to the girl came to her parents in a dream to reassure them that it was true that they had rewarded her faith. Upon waking, the girl's parents showered her with love and affection. Ever after they kept faithfully performing the roth pooja and their good fortune steadily increased.

Some years later, it so happened that the king was passing through on his way home from a hunting expedition and his eyes happened upon the Brahmin girl who was now a beautiful young woman. In the way of such things, the king was taken with the girl and asked her father for her hand in marriage which was of course accepted. The marriage was made and that is how the poor little Brahmin girl became the queen.

This, however, is not a story of easy happy endings. As the time grew near for the roth pooja, the new queen asked her husband the king for everything she needed to make the proper offering. But the king's minister was a bad man who gave his master bad advice. He told the king that the queen's requirements were exorbitant and unnecessary. He told the king that his wife was just being greedy asking for all of this material for a pooja he had never even heard of before. The king agreed and refused her request.

Naturally the queen was terribly upset and begged the king to reconsider but he would not so she went to the pooja room to beg the Devis to pardon her as it was through no fault of her own that she would be unable to make her customary pooja. The Devis heard her and sent messages to the king in his dreams that he would lose his kingdom for not performing the pooja.

The very next day, the king from the neighboring country invaded and conquered his kingdom, his soldiers abandoned him and he was sent into exile with his wife. Now in dire straits, the king begged pardon from his wife and she in turn advised him that he must ask forgiveness from the Devis. And so the king prayed and prayed and asked the Devis to forgive him, which they did after he promised to properly perform the pooja. His soldiers returned to his side and they recaptured the kingdom in a great victory. The entire kingdom performed the roth pooja faithfully from that time on.

Concluding prayer: Let us now pray to the Almighty that he will bless us as he did the little Brahmin girl and may he give us strength to remain strong and dedicated in our observance of the roth pooja.

From this story we are meant to take the lesson that having faith in doing the right thing and following up on it will be rewarded. We try to make a careful inventory at the end of each year to try and fulfill any promises we may have left undone. It allows us to go into the next year with a feeling of wholeness and completion. 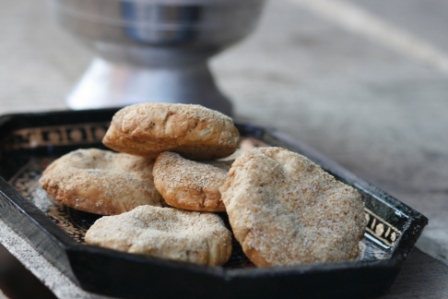 Sift the flour, semolina, cardamom, salt and baking powder in a medium mixing bowl. Add the clarified butter and rub between your palms until it takes the form of breadcrumbs.

Gradually add water and mix well, using hands, into a firm and pliable dough.
Cover with a damp kitchen towel and let rest for at least 30 minutes.

Divide dough into 20 small balls and roll out into 3 inch discs, 1/2 inch thick. Sprinkle the poppy seeds evenly over them and press them on to make them adhere.

Heat oil, three inches deep, to 325°F and carefully fry the discs until crisp and golden in color, 5 to 7 minutes. Remove roths, drain on paper towels and serve with hot tea.