It's estimated that as many as half a million animals were sacrificed at Nepal's Gadhimai festival in 2014. In four years, when the festival is to be held again, that number, organizers hope, will be zero.

The Gadhimai festival is held every five years in a town about 100 miles from Kathmandu. Dedicated to a Hindu goddess of power, the bloody origins are said to stem from a dream had by an imprisoned feudal landlord named Bhagwan Chaudhary, more than 250 years ago.

Chaudhary is said to have dreamed that the goddess Gadhimai "appeared to him and demanded a blood sacrifice in return for all his problems being solved," said N.G. Jayasimha, from Humane Society International -- a group that has long called for an end to the twice-a-decade killings.

When he woke up free of his confinement, Chaudhary "could not bear to sacrifice a human," Jayasimha said. Instead, he promised to sacrifice five animals with the help of a shaman, who "began the sacrifice with a token offering of a few drops of blood from five parts of his own body," followed by the killing of a single animal of five species: a buffalo, a pig, a goat, a chicken and a rat.

Over the years, though, hundreds of thousands of buffalo, goats, birds and other species have been slaughtered in what is posited to be the world's largest animal sacrifice.

"I don’t feel guilty about slaughtering the animals because it will make Gadhimai very happy. She has given my family a very good life and this is my way of saying thank you to her," festival-goer Samu Patel told Al Jazeera last year. "People make money by slaughtering animals, but for me, this is also spiritual satisfaction. I have beheaded around 59 buffaloes till now."

The animals are said to be deprived of food and water before their sacrifice during the two-day festival -- and then their deaths are shockingly slow and cruel.

It's a level of brutality some argue is out of line with the Hindu philosophy of nonviolence.

"Hinduism promotes the idea of 'ahimsa' also translated as nonviolence," said author Gadadhara Pandit Dasa. "This means nonviolence towards humans, animals and the planet earth... An animal has as much right to live out its natural life as a human does."

Ram Chandra Shah, chairman of the Gadhimai Temple Trust, which organizes the festival, issued a statement on Tuesday calling for an end to the ritual slaughter:

Some 2.5 million devotees were estimated to have made pilgrimages to the festival last year, and "it won’t be easy to end" this custom, Prasad said to the Agence France Presse.

"But we have four years to convince people that they don’t need to sacrifice animals to please the goddess."

Our concern has been this: how do we convince the people, so desperate for the favour of Gadhimai, that there is another way? How do we bring them on our journey? Thankfully, the dedicated efforts of the Animal Welfare Network Nepal and Humane Society International has shown us the path and provided the motivation to make this transformation a reality.

Through mass education and local development, we can bring enlightenment and prosperity to our region. We appeal for your support to develop our local infrastructure and educate our people. There is much work to be done, but together we can develop the social fabric of the Gadhimai area and bring peace to the Gadhimai Temple.

PHOTO GALLERY
Animal sacrifice at the Gadhimai festival
Download
Calling all HuffPost superfans!
Sign up for membership to become a founding member and help shape HuffPost's next chapter
Join HuffPost 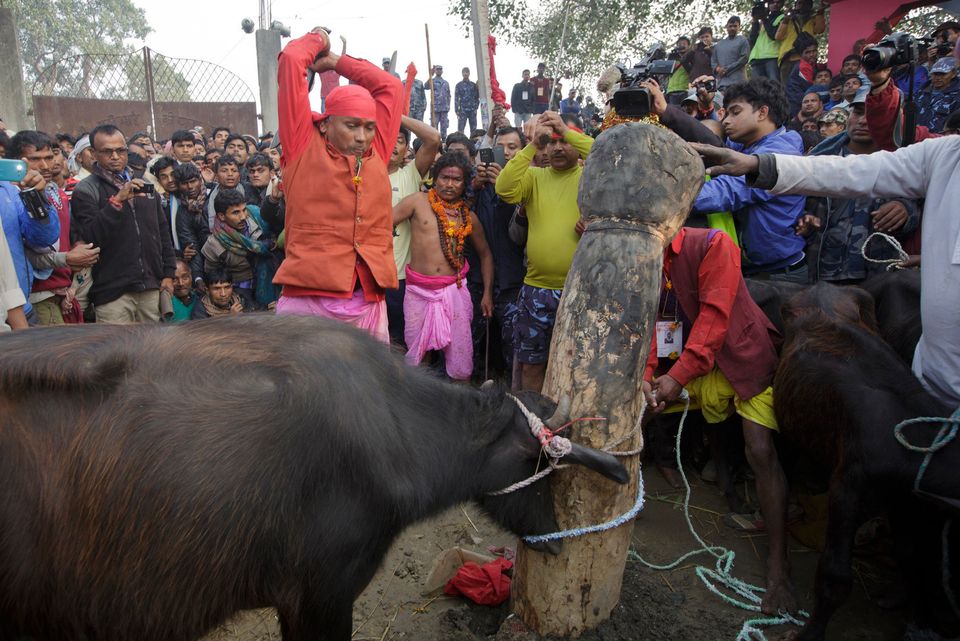