(Reuters) - Upwards of a million elated Hindu holy men and pilgrims took a bracing plunge in India's sacred Ganges river to wash away lifetimes of sins on Monday, in a raucous start to an ever-growing religious gathering that is already the world's largest.

Once every 12 years, tens of millions of pilgrims stream to the small northern city of Allahabad from across India for the Maha Kumbh Mela, or Grand Pitcher Festival, at the point where the Ganges and Yamuna rivers meet with a third, mythical river.

Officials believe that over the next two months as many as 100 million people will pass through the temporary city that covers an area larger than Athens on a wide sandy river bank. That would make it larger even than previous festivals.

After a slow start, police chief Alok Sharma said 1.5 million people had gathered by 8 a.m. (0230 GMT) on Monday, with more on their way.

Two dreadlocked men riding horses emerged from thick camp smoke before dawn, followed by a crowd of ash-smeared and naked holy men, or sadhus, one incongruously wearing a suit jacket. At exactly five minutes past six (0035 GMT), they yelled and dashed dancing into the river.

That the ancient festival grows in size each time it is held partly reflects India's expanding population, but is also seen as evidence that spiritual life is thriving alongside the new-found affluence of a growing middle class.

The ritual "Royal Bath" was timed to match an auspicious planetary alignment, when believers say spiritual energy flows to earth.

"I wash away all my sins, from this life and before," said wandering ascetic Swami Shankranand Saraswati, 77, shivering naked in the cold. He said he gave up a career as a senior civil servant 40 years ago to become a holy man, travelled on foot and for decades ate only nuts and fruit.

The festival has its roots in a Hindu tradition that says the god Vishnu wrested from demons a golden pot containing the nectar of immortality.

In a 12-day fight for possession, four drops fell to earth, in the cities of Allahabad, Haridwar, Ujain and Nasik. Every three years a Kumbh Mela is held at one of these spots, with the festival at Allahabad the holiest of them all.

More than 2,000 years old, the festival is a meeting point for the Hindu sadhus, some who live in forests or Himalayan caves, and who belong to dozens of inter-related congregations. The sects have their own administration and elect leaders, but are also known for violent clashes with each other.

Some naked, some wrapped in saffron or leopard-print cloth and smoking cannabis pipes, the holy men hold court by fire pits in sprawling camps decorated with colored neon lights, where they are visited by pilgrims who proffer alms and get blessings.

Despite their asceticism, the sects, known as akharas, are moving with the times. Swami Avdheshanand Giri Ji, who leads one of the main groups, has a Facebook page. Some gurus advertise on billboards and posters to attract followers, others drive trucks and chat on cellphones.

At the riverbank, men with dreadlocked beards to their feet vied for media attention with yogis supporting heavy weights with their genitals, while others holding golden umbrellas, flags and swords rubbed sand on their bodies after the dip.

"I feel pleasure," grinned Digambar Navraman Giri," who said he had not sat down for a year, even sleeping on foot. "This is why I became a sadhu," he said, steam rising from his body in the cold air and wearing nothing but two rings on his fingers.

Baba Ram Puri was given to his guru by his parents when he was barely one year old. At 31, he is now a young spiritual leader himself and says Indians with disposable income want to support traditional holy men.

"They earn a lot of money but they don't get peace, so they turn to spirituality," he said, sitting on cushions by a smoking fire. "That's why we continue to grow in strength."

Jim Mallinson, a Sanskrit scholar and expert on sadhus, says that, while exact numbers are hard to come by, it appears the sects are growing in strength and size, and the fair is becoming more religious.

"I suspect it is because the emerging middle classes are more than happy to spend their surplus cash on sustaining the sadhu tradition," he said.

Mobile phones and better roads also make the festival more accessible, while a thriving Indian media make the festival well known all across the country. There is even a smartphone app to guide pilgrims around the site.

"I won't become a sadhu, I want to be a cricketer," said Gaurav Vashisht, 21, a business student from New Delhi, whose family gives money to support one of the sects. "It's very important that this should survive, it's a great Indian tradition and has been going on for so many years."

The festival attracts global followers too, with a number of foreigners ordained in the hierarchy of sadhus, including Baba Mangalannand, who is also a popular trance music DJ under the name Goa Gil. He first came to the festival in 1971.

To cope with the flow of people, authorities in the state of Uttar Pradesh have installed 35,000 toilets, laid 550 km (340 miles) of water pipes and 155 km (95 miles) of temporary roads at the riverbank site.

Mostly, though, the festival's spirit does not change. Pilgrims make their way there without advertising, announcements or buying tickets. The sadhus show off yogic feats, catch up with old friends and discuss scripture, just as they always have.

"The Indian people don't change their attitude to spirituality overnight, we're not like the West," Ram Puri said, laughing. "That's why in India the spirit is strong." 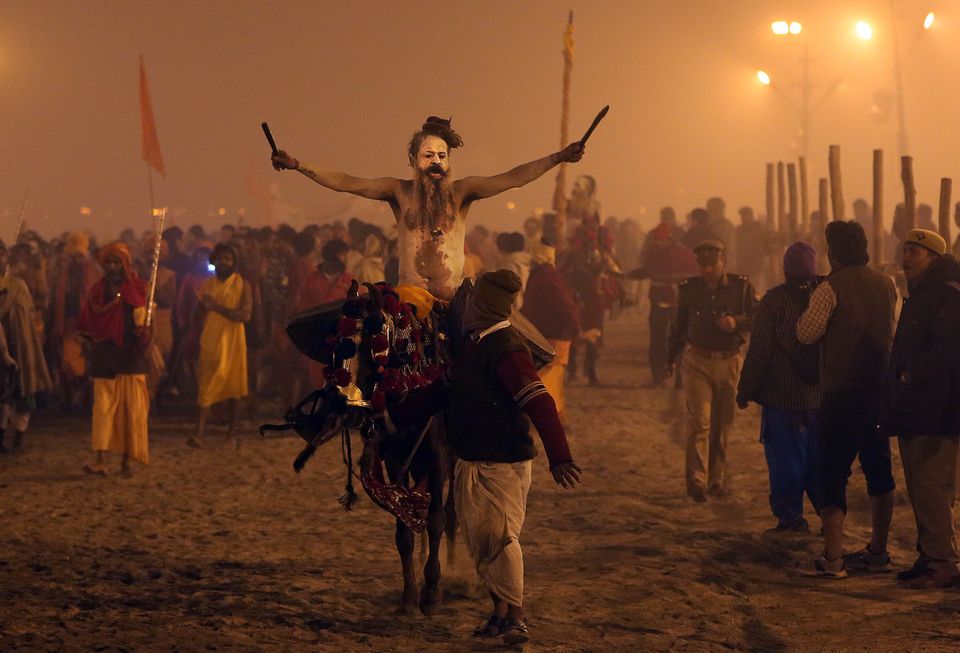 1 / 33
A horse mount naked Hindu holy man or a Naga Sadhu beats the drum as he returns after a dip at Sangam, the confluence of the Rivers Ganges, Yamuna and mythical Saraswati on one of the most auspicious day Makar Sankranti, the first day of the Maha Kumbh Mela, in Allahabad, India, Monday, Jan. 14, 2013. Millions of Hindu pilgrims are expected to take part in the large religious congregation of a period of over a month on the banks of Sangam during the Maha Kumbh Mela in January 2013, which falls every 12th year, where devotees wash themselves in the waters of the Ganges believing that it washes away their sins and ends the process of reincarnation. (AP Photo /Manish Swarup)
AP