Would you trust a friend to set you up on a date more than a random website?

That's the entire philosophy behind Hinge, a new online dating service taking over your friends' iPhones. Billed as the "anti-Tinder," Hinge actually uses a swiping system similar to the famous dating app, but with one fundamental difference: It only matches you with friends of your Facebook friends (OK, or third-degree connections).

Its slogan is simple: "Meet new people through friends." That's right, no randos.

Hinge claims that 99 percent of its users are college-educated, 90 percent are between the ages of 23 and 36 and that the average user has 36 friends on Hinge. Having only launched in 2013, the app has already made 2 million matches and just celebrated its first wedding engagement.

The Huffington Post spoke with founder and CEO Justin McLeod, 30, about the app's insane word-of-mouth success, making Tinder obsolete and developing its dating algorithm with a former CIA genius.

How do you differentiate Hinge from others like apps OKCupid and Tinder?

Tinder didn’t exist when I created Hinge, but I personally wouldn’t have joined sites like OkCupid or Match.com. The whole purpose of Hinge was to make those obsolete. Instead we wanted to give you the opportunity to meet the kinds of people you would meet if your friends were always throwing house parties, dinners and brunches and you were able to attend all of them! It’s meant to accelerate the process of meeting your friends’ friends.

You launched in D.C. and then brought Hinge to New York City. Why those cities first?

D.C. was first simply because that’s where I was before I went off to business school. I had contacts there and lots of friends there. It seemed like a good place to start because it wasn’t as crowded of a market. At the time, a lot of people were creating dating sites (even more so than now, surprisingly), and places like New York were full of these friends-of-friends dating sites. We were able to get some attention in D.C. and test the product out before going somewhere like New York.

How do you think Los Angeles will be different?

We are really excited about LA. We have a waiting list of 6,000-7,000 people who have tried to download the app already -- without us doing any marketing at all. They have all heard about it from friends. It’s interesting because Tinder started in LA, and I think it’s one of the places where it’s worn out the quickest. From what I hear, people thought it was cool when it started, but people burned through all of their matches and now the quality has gone down.

I think we have a great long-term solution for that because we have a curated app that gives you a limited number of matches each day. 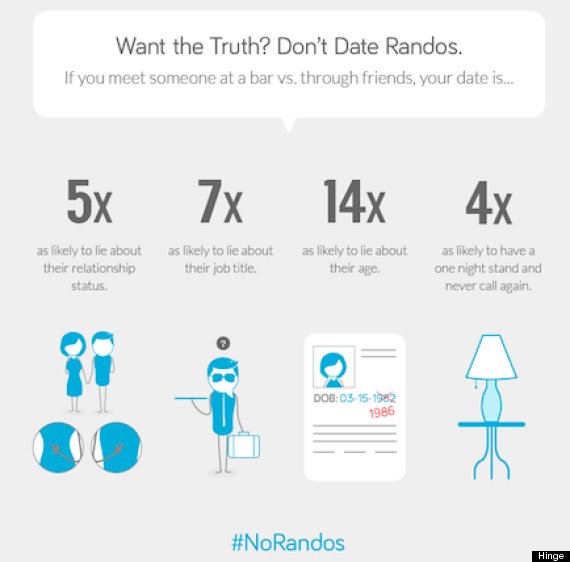 I was told that the algorithm you use was developed by an ex-CIA guy. Do tell!

He likes to say that he now makes love, not war [laughs]. He was a data scientist that worked for a CIA contractor and his job was data fusion, which meant taking a bunch of data from a bunch of different sources and trying to derive patterns, mainly within the industrial military complex. We create a set of matches among your second and third degree connections and choose people each day for you that we think you’re going to like and they’re going to like you. We use everything from your Facebook data to your past behavior on the app to create those matches.

Is your target audience young professionals?

Yeah. Right now, our app is 99 percent college educated and most work in either consulting, banking, law, tech or media. The media and entertainment piece will be strong in LA. And there are lawyers everywhere.

One of the biggest complaints about Hinge is that you can’t choose your profile picture. It automatically pulls Facebook photos, and for some, Facebook pictures aren’t necessarily what they would use for dating purposes. Is that intentional?

We definitely want all of your pictures to be validated on Facebook and recent, but they don’t necessarily need to be your profile photos. So that’s one of the next things we will be rolling out in early May -- the ability to edit your own photos.

What is the ratio of male-to-female users? Some have said that there seem to be a lot more women than men on Hinge. Is that true?

Interesting. No, it’s almost exact parity. I think it’s 50.2 percent women and 49.8 percent men. That wasn’t even necessarily by design. It just happened. Most other dating sites are about 70 percent men. We even retain women a little bit better than men, actually, because I think they derive a lot more value out of us than they do on a typical dating app.

Online dating has exploded in the last few years, especially amongst Millennials, but there definitely are still problems that occur with meeting online. What do you think some of the biggest challenges are?

It’s an overall unnatural process. The idea of turning your love life into some research project is very unromantic and un-serendipitous. There’s a lot of pressure on that first interaction -- it can feel like an interview. The whole process is weird. You have to spend a long time looking at profiles, or like on Tinder, you just get matched up with a bunch of random strangers.

We are really trying to disrupt that whole paradigm and create an experience that’s like an analog for being at a house party, right? It’s getting the opportunity to meet more people you’re going to click with who you can have more fulfilling relationships with. That’s why I don’t call it a dating site. Tinder is also not exactly a dating site, but it’s also not giving you really good quality interactions. That is exactly what we are trying to do.

A problem with dating apps and social media is that people are clever and charming when they have time to craft their responses to everything -- but then people meet in the real world and they are different than their online personas.

That’s exactly right. People lie and people misrepresent themselves. When you think about the way that Hinge works, is it really fixes everything. You have the social validation of your network, so you can ask your friends in common about the person you’re going to meet. You don’t have to sort through long profiles. You can move offline with them relatively quickly because the trust is there from your network.

When you go out on a date, it doesn’t really feel like a weird online first date, and you can be a little bit more casual because you already have something to talk about. The whole process is easier and more enjoyable and even a little bit serendipitous --because it’s not a big searching algorithm where you comb through other peoples’ profiles. We bring you these 10-15 people a day who we think you’ll like.

Some people are lacking patience with Hinge. Because you’re not being bombarded by randoms as much (like on Tinder), they are finding it difficult to move from being matched to actually talking or going out.

That’s definitely where a lot of our focus is right now. We find that our rate is still better than some other sites, but it’s not as high as we’d like it to be. I think there are ways to fix that. We want to ensure that a match turns into a conversation, and once there’s a conversation, that it turns into moving offline.

There’s lots of work to be done on how we can improve each of those steps. We are in a uniquely excellent position to help moving from a match to a real life interaction because when you already have the social validation, you are more open to moving offline faster. You don’t need to do as much digging first. You both know John, so you say let’s go out and see how it goes.

CORRECTION: While editing this piece, an editor incorrectly implied that Hinge only matches users with second- or third-degree connections once more direct connections have run out. The app provides varying degrees of matches from the outset.